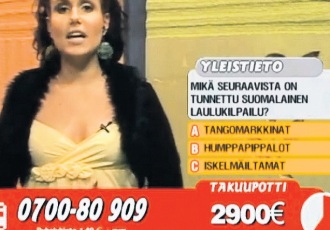 Peak-time scheduling is a hard thing to get right. In the afternoon and evenings, when most people watch telly, broadcasters have to attempt to please many different groups of people. From midnight, on the other hand, the target audience has been identified and homed in on as if with an Exocet missile; said audience comprising students, stoners, and very gullible people. The very early morning schedules on terrestrial TV don’t really contain many programmes as such, consisting primarily of gentle radio broadcasts accompanied by text, or the most mindless, inane phone-in competitions you could think of. I’m guessing the former are intended for people who have fallen asleep on the sofa, while the latter are intended for insomniacs and the aforementioned stoners and unreasonably credulous.

These competitions are mysteriously hypnotic. Sometimes they have a real person ‘presenting’ the whole thing, normally a rather fruity young woman, trying to convince the viewer to part with their cash via exorbitant text message charges. The questions are only difficult if you have no concept of the world, the answers being so obvious that only a backward farmhand who’s spent the morning hitting himself on the head with a spade could get them wrong. Typical example: Which of the following is made of wood? Is it: a) a spaceship b) the moon c) a tree? The only real question is why they bothered with the question at all, rather than just having a general telephone lottery. Is it: a) so the audience will think themselves clever b) to make sure more people phone in c) they’re not allowed to have a simple lottery, so the producers turn it into a game of ‘skill’ by providing a disdainfully simple question, thus ensuring as many people as possible phone their expensive number, and insulting the viewer twice? Calls charged at 20 per cent of your dignity per nanosecond.

It wouldn’t be so bad if these useless broadcasts were only shown in the dead of night, but channels have been getting more and more interested in ‘interactive’ TV for ages now, so any time they can get you to phone or text in and pay two euros for the privilege they’ll make the most of it. Contemptuously simple phone-ins are two a penny throughout the day nowadays, and after the morning breakfast shows some channels devote themselves to these or similar competitions until the mid-afternoon. Not Yle, mind you – public sector, you see, and therefore already paid for by us. The only good thing about these shows is when people send in text messages which are flashed up at the bottom of the screen, which gives budding psychologists and social anthropologists plenty of material to work with. There are some pretty lonely people out there I can tell you. How desperate do you have to be to flirt with strangers via SMS on a TV programme? Well, either desperate or a pinhead, since you also get messages along the lines of “OMG WTF GR8 BBQ LOL CU L8R MATTI.” These clearly show the evolutionary implications of dumb phone-ins: our world is doomed.

Nick Barlow This email address is being protected from spambots. You need JavaScript enabled to view it..

The writer knows the art of channel surfing.