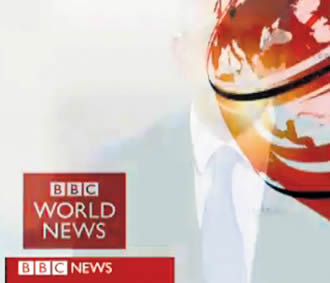 Very occasionally, I do miss things about living in the UK. The list, including such essentials as fish and chips and Yorkshire pudding, is mainly food-related, I admit, but not entirely. Although there’re not many things to be proud of as a Brit these days, one thing that makes me both wistful and prone to a bit of God-Save-the-Queen chest-thumping is Auntie, known to most of the world as the BBC. At least, when I think about growing up in the 1980s it makes me nostalgic; watching some things made by the Beeb these days is more likely to induce nausea than nostalgia.

Of course, I’m not talking about the period dramas, comedy shows and documentaries which have rightly made the corporation into a world-famous organisation, renowned for high-quality, professional products. No, I’m talking about the BBC TV channel that is most common on Finnish screens, and is also probably the single most uninformative source of facts you could hope to find – BBC News. Chances are you’ve seen one of the non-stop news channels that infest our international television networks nowadays. Truth be told, they’re pretty much all as bad as each other – the only reason BBC News seems worse than the others is because it’s the BBC, dammit!

BBC News is available in most of Finland through your satellite or cable network, has lots of swishy graphics, and is eminently suitable for people with the attention spans of ADD-afflicted goldfish. Headlines are repeated ad nauseum every fifteen minutes, with weather summaries (ditto) every half hour. On the hour we’re treated to a ‘proper’ news bulletin. The problem is that they need to broadcast a lot of stuff by virtue of the fact that they have 24 hours a day to fill, but they spend all their time repeating the headlines and zero time fleshing the stories out in any meaningful way.

In fact, I’m not sure it’s supposed to be watched at all – it’s best stuck on the telly in the corner while you’re doing something else and absorbed. That way you end up telling people who won the NHL playoffs without knowing anything else about it nor, indeed, being able to remember why you’re aware of it, especially since you hate ice hockey. This talk about ice hockey, incidentally, also illustrates another weird aspect of this channel – the endless preoccupation with yank sports. We only seem to hear about the NHL, and likewise we only hear about American baseball– a sport itself so North American you could put a Stetson on it and call it ‘pardner’. And yet, we get footage of, say, cricket, bowls or sähly.

Although it tries to pretend it’s a proper news service, I’m sure that if you totalled up all the time you spend listening to trailers for the channel, bad incidental music and weather reports you’d find it was double the amount of time you actually got some ‘news’. With all that time to fill, you’d think they could cover some news in detail, instead of leaving the viewer with more questions than answers. Apparently, however, they can’t.