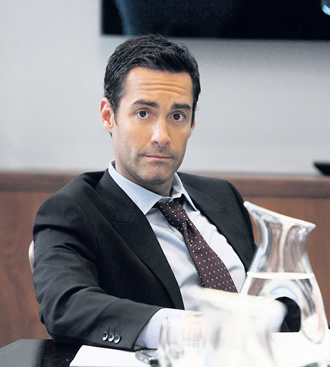 Ladies and gentlemen, meet Ted. Ted is the senior vice-president of R&D for one of the biggest companies in America, Veridian Dynamics. It’s hard to be specific about what Veridian Dynamics do because they do everything from industrial equipment to defence technology. They are extremely wealthy and prepared to do anything to make money, including weaponising pumpkins, the dastardly fiends. Only three countries in the world are richer than Veridian. Their latest product is an office chair called the Focus Master. It’s so uncomfortable it raises productivity by ten per cent, as well as causing madness in its users.

Ted loves his job. He’s been there three years and runs a team of some of the smartest people in the world. He’s fairly hard-nosed about business. It’s not about right and wrong, he says, but success or failure. Having said that, he once had sex with his fearsome boss, Veronica, which wasn’t very professional, was it? On Ted’s team are genius scientists Lem and Phil, the latter of whom gets cryogenically frozen in a manner amusingly reminiscent of Han Solo in The Empire Strikes Back before being accidentally thawed a few hours later. There’s also problematic love interest Linda and Ted’s young daughter, Rose, who’s not afraid to give her father sage advice.

Better Off Ted is one of the better comedies of recent times. The best reference I can think of is Scrubs, as the humour is very similar, both being wry and sarcastic, and the filming style is likewise comparable. However, for reasons known only to themselves, MTV3 have scheduled this little gem to be shown on Monday afternoons just after 2 pm. This means that the audience for this show is expected to be around ten. Maybe in these days of recording digiboxes and the internet and stuff like that the actual broadcast time of a show is becoming more and more irrelevant. You can just record it whenever it’s on and watch it later. But it’s still a hopeless effort from MTV3, especially considering the amount of nonsense they broadcast in the evenings.

Looking on the bright side, recently Finnish TV has become rather up-to-date when it comes to imported series. Shows like Grey’s Anatomy and Desperate Housewives used to be aired here months if not years after their US showing, but these days we get them the same week. Although I’m not a fan of either of those never-ending shows, it’s better for those who are and is presumably a response to the large amount of torrent downloading nowadays. The best way to improve viewing figures is to make sure there’s less incentive for people to get their telly fix elsewhere. It won’t be long before we can access any TV show directly through our computers or TV at any time we feel like it. In the meantime those digiboxes should come in handy.

Better Off Ted
on Mondays at 14:15 on MTV3
This email address is being protected from spambots. You need JavaScript enabled to view it.