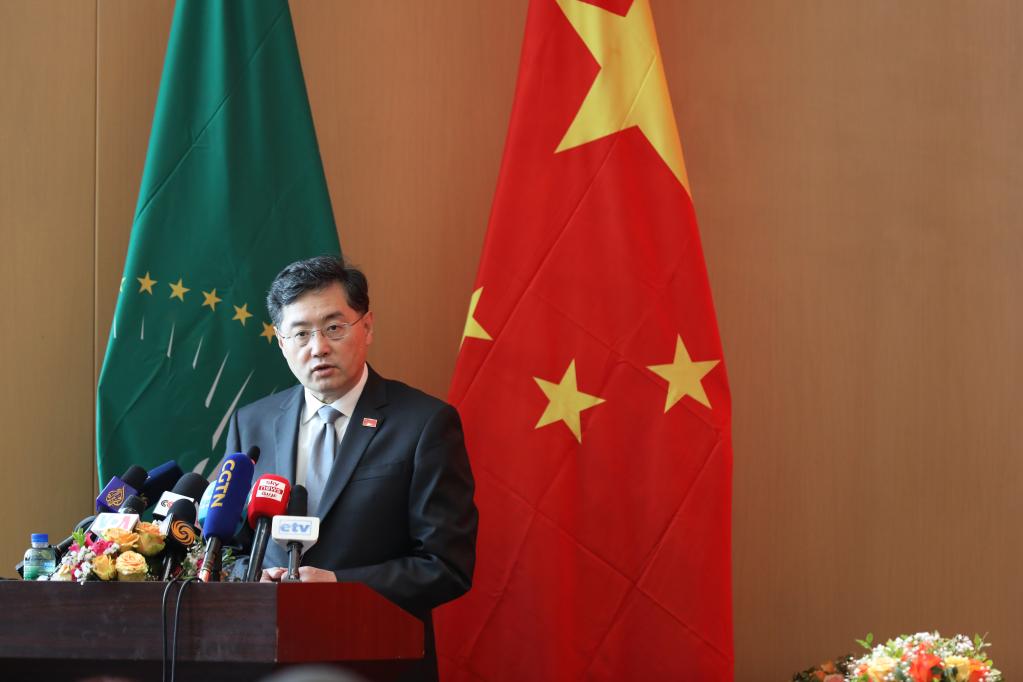 For the past 32 years, all Chinese foreign ministers started their new year overseas tours in Africa, even during the COVID-19 pandemic, which testifies to the long-lasting friendship between China and Africa.

Qin followed his predecessors' footsteps. For the past 32 years, all Chinese foreign ministers started their new year overseas tours in Africa, even during the COVID-19 pandemic, which testifies to the long-lasting friendship between China and Africa.

China's diplomatic tradition of "tour to Africa first" originated in January 1991, at a time when the world was undergoing profound changes with the end of the Cold War. Its then Foreign Minister Qian Qichen visited Ethiopia, Uganda, Kenya and Tanzania. 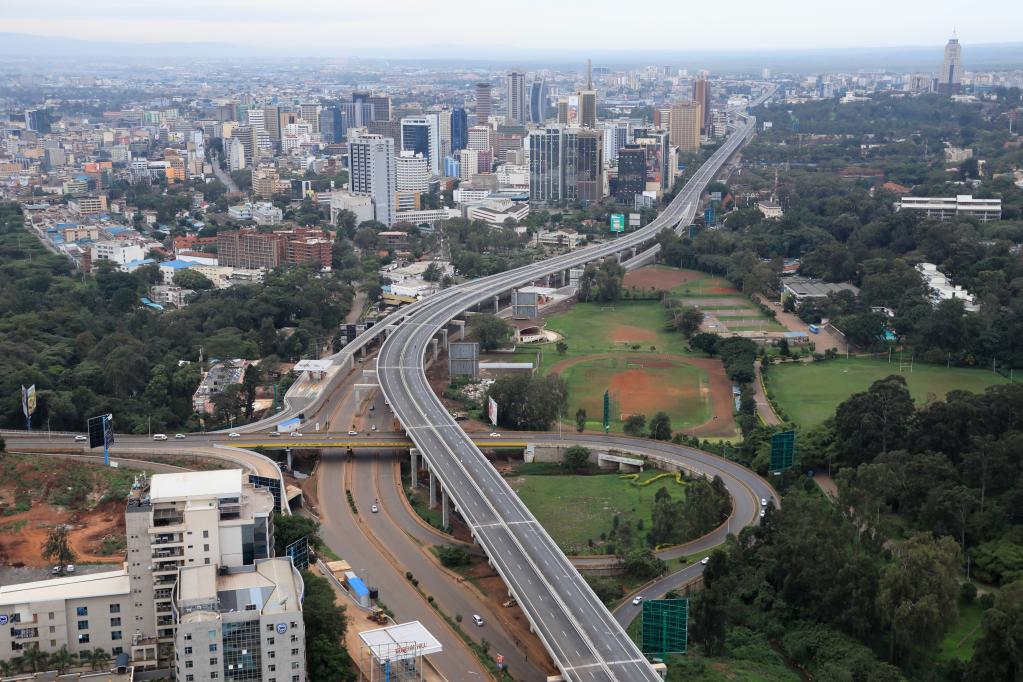 This photo taken on May 8, 2022 shows a section of the Nairobi Expressway built by China Road and Bridge Corporation in Nairobi, Kenya. (Xinhua/Dong Jianghui)

In 2000, the Forum on China-Africa Cooperation (FOCAC) was established to form a collective dialogue mechanism between China and African countries on the basis of equality and mutual benefit. The forum opened a new chapter of pragmatic cooperation in China-Africa friendship.

In 2013, Chinese President Xi Jinping chose Africa for his first overseas visit after assuming the presidency and put forward the principles of China's Africa policy -- sincerity, real results, amity and good faith, and pursuing the greater good and shared interests.

Over the past decade, thanks to the joint guidance and efforts of Chinese and African leaders, China-Africa relations have made historic achievements that have attracted worldwide attention and entered a new era of forging a high-level China-Africa community with a shared future, Qin said Wednesday while addressing the press jointly with Chairperson of the African Union (AU) Commission Moussa Faki Mahamat in Addis Ababa, the capital of Ethiopia.

"There is a common feeling among African countries that China is a reliable partner, and there is a great trust and credibility in China-Africa cooperation," Ezzat Saad, director of the Egyptian Council for Foreign Affairs, told Xinhua.

China stood side by side with Africa in its struggle for national independence and liberation, and China has also stood with Africa in its efforts to accelerate development and revitalization and increase its participation in international affairs, Faki said Wednesday in a meeting with Qin.

In Addis Ababa, Qin's first stop, Ethiopian Deputy Prime Minister and Foreign Minister Demeke Mekonnen said Qin's first visit to Ethiopia at the beginning of the new year is of great significance to bilateral relations as well as the wider Africa-China relations. 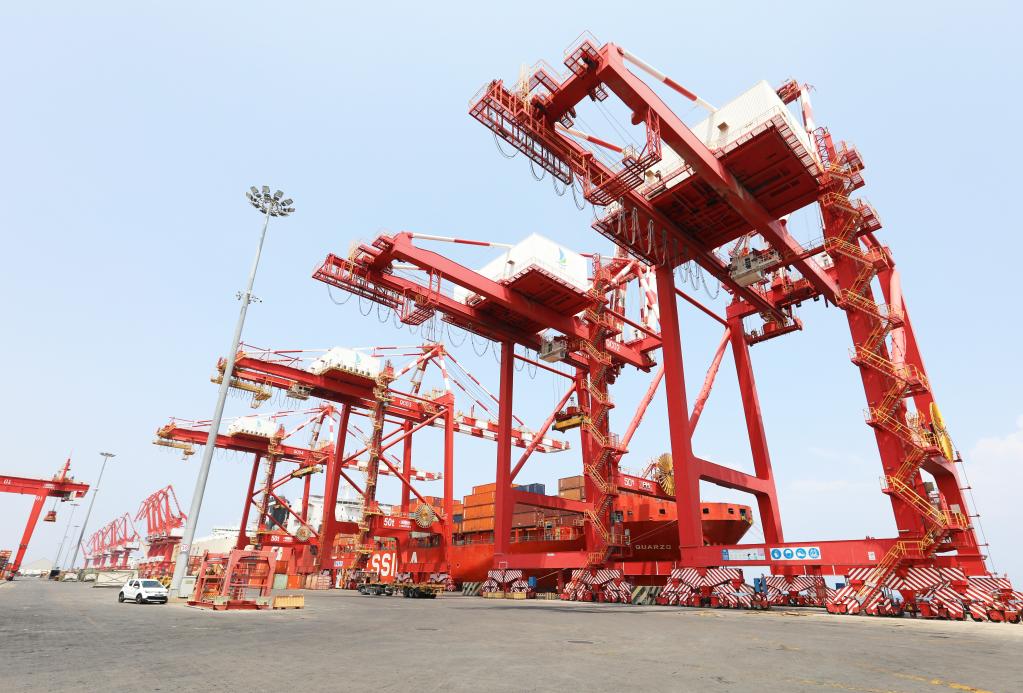 A CONTINENT ON THE RISE

Africa is a continent on the rise and a fertile field of hope, full of vigor and vitality, Qin said Wednesday while addressing the press in Addis Ababa.

Since year 2000, when FOCAC was created, China has built more than 6,000 km of railways, 6,000 km of roads, nearly 20 ports and more than 80 large power facilities in Africa, and assisted the construction of more than 130 hospitals and clinics, more than 170 schools, 45 stadiums and gymnasiums, and over 500 agricultural projects in Africa.

Highly valued by the African people and governments, FOCAC has been further strengthened by the Belt and Road Initiative proposed by China 10 years ago.

The initiative has brought many benefits to the African continent, including improving infrastructure in African countries, said Saad, the Egyptian expert. "And there are large Chinese investments in Africa in the areas of transportation, manufacturing, environment, human development and health."

"Cooperation with China is always welcomed and reliable," he said.

China is now Africa's biggest trading partner and one of its biggest foreign investors. In the face of COVID-19, China and Africa have enhanced solidarity and strengthened friendship.

For Peter Kagwanja, chief executive of Kenya's Africa Policy Institute, a pan-African think tank, China has also demonstrated its sincerity and actions to assist Africa's development by strategically aligning itself with the continent's quest to achieve the goals of Africa's Agenda 2063 and the UN Agenda 2030.

The same is true at the sub-regional and national levels. For example, Madagascar is in the process of "putting in place all the strategies to achieve food self-sufficiency by 2024," which creates the need to carry out agribusiness cooperation with China, Andriamainty Fils Jean Marius, an official at the country's Ministry of Agriculture and Livestock, told Xinhua in late December.

Africa values China's strong support for African integration, connectivity and development of the free trade area, and looks forward to working with China to build an Africa-China community with a shared future in the new era, said Faki.