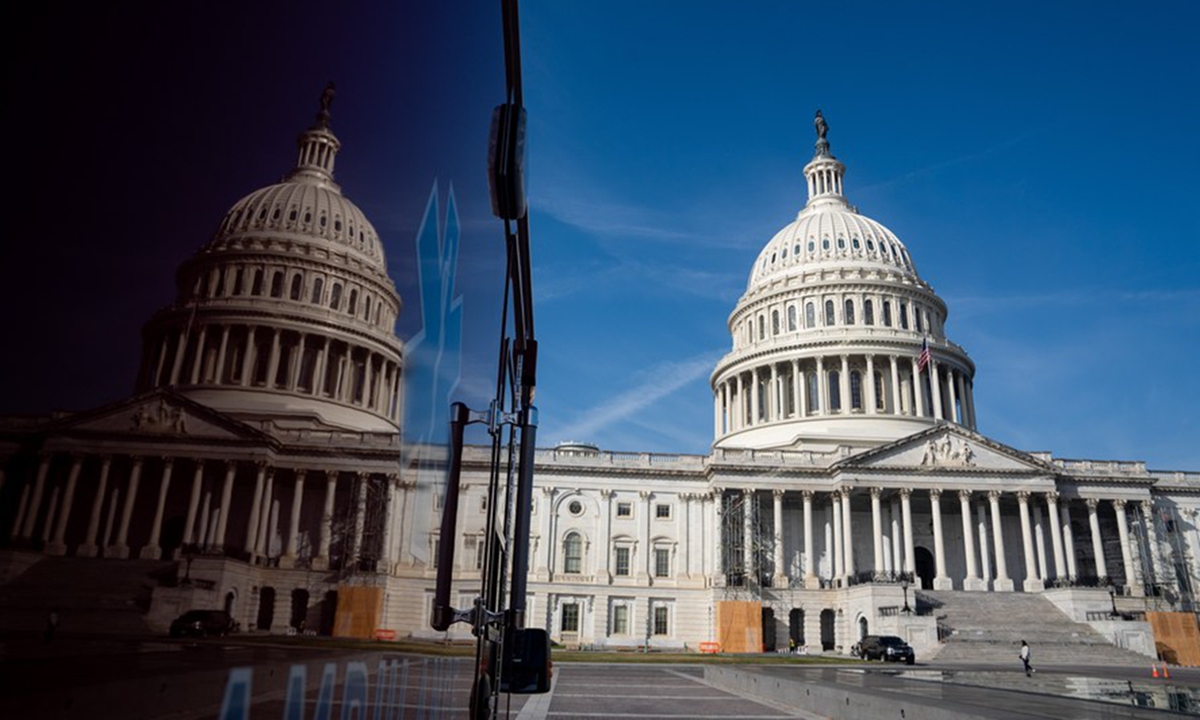 The US Capitol building is seen in Washington, DC., on November 4, 2022. Photo: Xinhua

Right before the second anniversary of the Capitol riots, on January 3, 2023, another political chaos, dubbed by CNN as a "horror show," happened in the same place. US House of Representatives went through a "difficult labor" of a new speaker after three rounds of voting failed. The last time a House speaker vote went to multiple ballots was 100 years ago. Tuesday's occurrence was truly a once-in-a-century phenomenon. During Capitol riots, American rioters shocked the building from the outside. This time, the stalemate was the result of conflicts from inside the Capitol. The two events are chaotic phenomena of spread and aggravation of the disease of US political system.

The one who failed to pass the three rounds of the votes for US House speaker is Kevin McCarthy. In the eyes of outsiders, he is a well-known ultra-conservative politician. He is against Clean Power Plan and the Paris Agreement, and promised to overturn a number of relevant legislations that Washington has passed. His crazy anti-China remarks also left a very bad impression on the Chinese people. However, astonishingly, McCarthy was not opposed because of his radicalism, but because he was considered not tough enough by some more radical congressmen in the Republican Party. It shows how severe the division and polarization in the US politics are.

What happened in the highest hall of "US democracy" is not a simple farce, but a political thriller with huge destructiveness, and a wide-ranging and far-reaching impact. This not only worries Americans, but also political observers from quite a few countries internationally.

While the antagonism between political parties in the US continues to escalate, the internal divisions in the Republican and the Democratic parties have become increasingly prominent. At this time, a completely irrational and dangerous tendency has surfaced in Washington: finding or creating an "enemy" outside the US to suppress, alleviate and divert political divisions within the country.

As a result, China, which is developing rapidly in economy and has a different political system and ideology from the US, is forcibly being established as an "enemy of the US." Some lawmakers are scrambling to show their toughness toward China. The tougher, the better. They will gradually fall into collective self-hypnosis, and will keep a blind eye on the fact that the enemy of "US democracy" is actually the US itself.

The US House of Representatives will continue to vote on Wednesday, but to some extent the result is no longer important. McCarthy is intensely negotiating with his opponents in the Republican Party. To put it bluntly, it is a political exchange, and he is likely to make a more "tough" promise in the future. If McCarthy is still elected after some tossing and turning, then his extreme words and actions may intensify.

In fact, the current difficult status of China-US relations has a lot to do with US sick party politics. Meanwhile, the electoralization of political party functions, the frequent emergence of extreme issues, and the rise of veto politics has spilled over from the US to many countries and international institutions, causing widespread concerns and seriously hindering international cooperation.

History proves that political parties' "being at daggers drawn" in the US Congress often indicates major turmoil.

Before this time, there have been 14 times in the history of the US that Congress was unable to elect a speaker in the first round of voting, 13 of which occurred before the Civil War, and the elections in 1855 and 1859 before the outbreak of the war were among the most voted - 133 and 44 times respectively.

Amid rising political animosity, 90 percent of Americans expect 2023 to be a year of political conflict in the US, according to the latest Gallup poll. More than 70 percent of Americans disapprove of the performance of Congress, according to a previous Gallup poll. This reflects a general disappointment in the US society with its domestic politics, and also shows that the "anti-democracy" in the US has developed to an advanced stage, and has caused it to be trapped in the cocoon of "veto politics," losing the momentum of innovation, and will become more radical in the future. Such a US is dangerous to the world.

Faced with the political chaos in the US, Canada's Globe and Mail raised a sharp question: whether the political class of the country is able to govern, and whether the internal conflicts and contradictions of one of the major political parties contaminate the entire system.

Another Canadian media quoted a research report saying that the toxic political culture in Washington and across the US was spilling over the border. "Canada is picking up the political radicalization bug from the US."

It seems that as Canada is a close neighbor of the US, its feeling is very distinct. When such a US shamelessly claims the world cannot lose US leadership, isn't that horrific?