Chinese Ambassador to Egypt Liao Liqiang addresses a symposium on Sino-Arab relations and ways to enhance them in the future, in Cairo, Egypt, Dec. 28, 2022. (Xinhua/Sui Xiankai)

Chinese and Egyptian diplomats, experts and media representatives attending a symposium here on Wednesday hailed the shared political will and mutual respect between China and Arab states for contributing to the fast growth of the China-Arab ties.

In his opening speech, Chinese Ambassador to Egypt Liao Liqiang briefed the participants on the social, economic and diplomatic achievements made by China in 2022 under the leadership of President Xi Jinping, especially the success of holding the 20th National Congress of the Communist Party of China (CPC) in October.

He said the Congress has drawn a grand blueprint for building a modern socialist country and promoting the great rejuvenation of the Chinese nation in an all-round way, contributing Chinese solutions to the common problems faced by mankind. It has also formulated the future direction and basic strategy for conducting the major-country diplomacy with Chinese characteristics.

The Chinese envoy also addressed the importance of the first China-Arab States Summit and China-Gulf Cooperation Council (GCC) Summit held in Saudi Arabia in early December for the building of a China-Arab community with a shared future in the new era.

Liao referred to the four ways proposed by President Xi during the summits to build a China-Arab community with a shared future, including upholding independence to preserve common interests, focusing on economic development to enhance mutually-beneficial cooperation, maintaining regional peace to achieve common security, and promoting civilizational exchange to deepen understanding and trust. 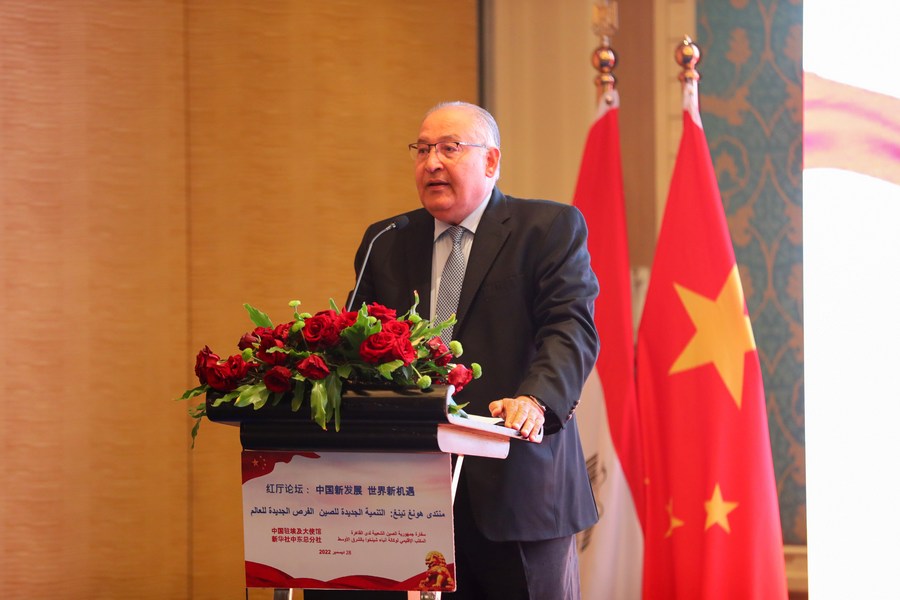 Ezzat Saad, director of the Egyptian Council for Foreign Affairs, addresses a symposium on Sino-Arab relations and ways to enhance them in the future, in Cairo, Egypt, Dec. 28, 2022. (Xinhua/Sui Xiankai)

Ezzat Saad, director of the Egyptian Council for Foreign Affairs, commended the relentless efforts made to enhance the China-Arab relations, which are very important and beneficial for both sides to achieve broad interests.

Shared political will, respecting each other's internal affairs, and China's path of not imposing its political or economic model on the Arabs, in addition to China's positive stances toward all Arab issues, have greatly contributed to the growth and prosperity of the China-Arab ties, said Saad.

He lauded the frequent diplomatic communications between Arab states and China, citing that Egyptian President Abdel-Fattah al-Sisi has visited China for seven times since 2014.

Beijing's interest in the Middle East exceeds its energy needs, as it is currently the largest economic and commercial partner for many Arab countries in many fields such as investment in infrastructure, communication, renewable energy, smart cities, and artificial intelligence, Saad added.

Guests attend a symposium on Sino-Arab relations and ways to enhance them in the future, in Cairo, Egypt, Dec. 28, 2022. (Xinhua/Sui Xiankai)

Tarek el-Sonoty, deputy editor-in-chief of Egypt's state-run Al-Ahram newspaper, said China's policy on Arab issues has proven to be a clear success over the past years, citing the fast increase in the China-Arab trade volume which reached 330 billion U.S. dollars in 2021, a 37-percent increase from 2020.

He stressed the importance of continuing the China-Arab cooperation in the next stage in various fields, including politics, economy, trade, investment, scientific research, media, health, and sustainable development.

Ahmed Sallam, former undersecretary of Egypt's State Information Service, lauded the China-Arab ties with a long history for serving as "a model for communication, cooperation and dialogue in all fields."

He described China as "a reliable partner" for Arab states in strengthening bilateral relations in various fields in the future and achieving the goals of comprehensive development. 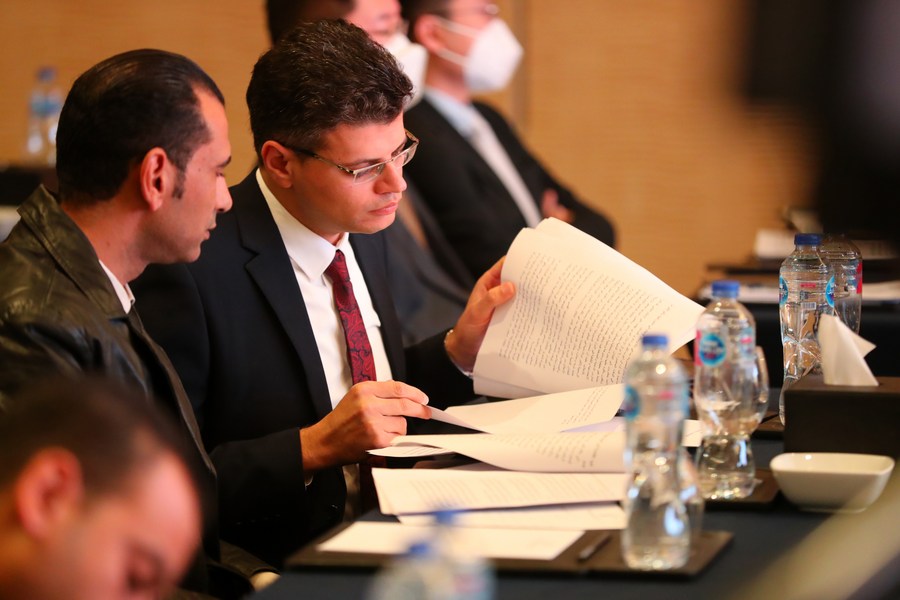 A guest reads materials during a symposium on Sino-Arab relations and ways to enhance them in the future, in Cairo, Egypt, Dec. 28, 2022. (Xinhua/Sui Xiankai)

Zhang Hao, director general of the Middle East Bureau of Xinhua News Agency, highlighted the global significance of the 20th CPC National Congress, which has injected stability into the volatile world and boosted people's confidence in reversing the global economic downturn.

He also said the Congress identified "building a community with a shared future for mankind" as the lofty goal of the major-country diplomacy with Chinese characteristics in the new era, which has strengthened the momentum in the building of a China-Arab community with a shared future, as reflected by the just-concluded first China-Arab States Summit and China-GCC Summit.

The symposium, co-sponsored by the Chinese Embassy in Egypt and China's Xinhua News Agency, was attended by about 60 Chinese and Egyptian diplomats, experts, and media representatives.