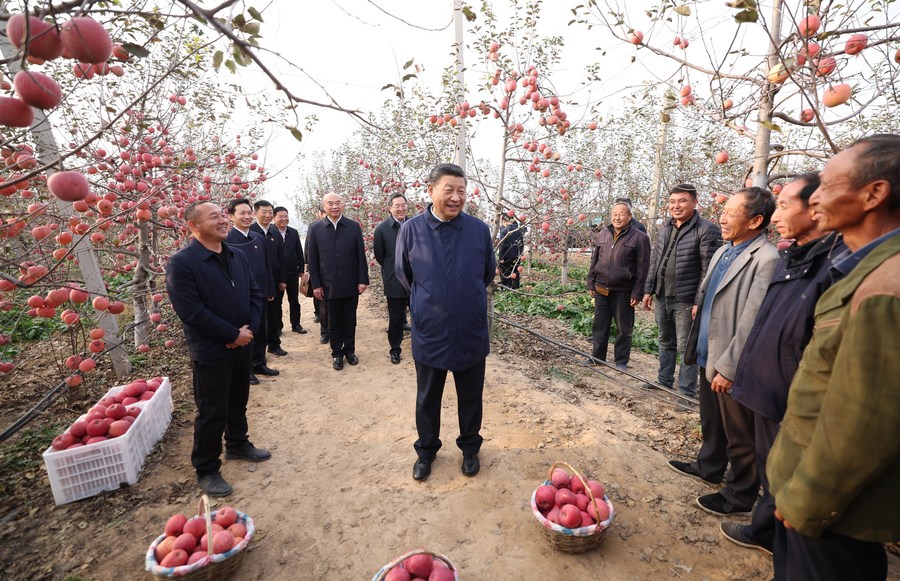 Xi walked into the orchard and chatted with growers who were picking apples. He asked about this year's harvest and picked a big red apple.

Xi asked detailed questions about how they grew apple trees and picked fruits, what species they planted, what prices they sold their apples for, and their income. He also inquired about how the village had developed apple planting and other industries.

Local villagers told him that they had effectively solved the problems they had previously encountered in irrigation and water use by building dams, and also by adopting drip irrigation and better management.

Xi recognized their efforts, saying, "This is exactly agricultural modernization. And you have found the right path to industrial development. "

The Chinese president has repeatedly emphasized the importance of agricultural modernization in rural revitalization.

During the annual sessions of China's top legislature and political advisory body in 2020, Xi recalled the harsh times of his youth when he worked and lived with villagers in northern Shaanxi. Xi said he often went hungry at the time, and asked local villagers what a happy life meant for them. The villagers thought hard and said it was to carry a "golden shoulder pole" to do farm work.

Xi said, "I think this goal is also being achieved. This 'golden shoulder pole' can be interpreted as agricultural modernization."

In 1940, the Academy of Natural Sciences in the Shaan-Gan-Ning Border Region introduced apple tree seedlings and planted them in trial fields. In 1947, a farmer from Asi village, Luochuan county, Yan'an used a donkey to bring 200 apple tree seedlings to his village from Lingbao city, central China's Henan Province.

Nowadays, apple planting has grown into an industry in the locality, helping locals live better lives.

Outside an apple washing and selecting workshop in Nangou village, Xi said Shaanxi embraces favorable timing, geographical and human conditions to vigorously develop the apple industry, which is the perfect, most suitable and most promising industry for the region.

In August 2022, Xi inspected the city of Jinzhou, northeast China's Liaoning Province. The first place he visited in the city was the Liaoshen Campaign Memorial. There, he observed a banner with the words "An army that advocates benevolence and righteousness" on it for a long time and recalled the story behind it.

One day in the autumn of 1948, soldiers of the People's Liberation Army (PLA) marched by apple trees full of ripe fruit during the Liaoshen Campaign, one of the key campaigns of the War of Liberation more than seven decades ago, in the Jinzhou countryside. The soldiers were thirsty and hungry, but they did not help themselves to any of the apples that the villagers had planted.

“Here, the fighters were conscious that not eating the apples was noble, whereas to eat them would have been ignoble. They knew the apples belonged to the people," Xi said, quoting the late Chairman Mao Zedong's comments on the story.

Since the 18th National Congress of the CPC, Xi has paid many visits to rural areas in China, always caring about the people and keeping in mind the responsibility of doing a good job for the benefit of the people.

In December 2014, Xi visited a greenhouse where strawberries were being grown in Xianfeng village, Dantu district of Zhenjiang city, east China's Jiangsu Province.

He checked on the growth of the strawberries and asked about the introduction of the strawberry varieties, whether they were grown in containers that contained nutrients, the cost of growing them per mu of land and the net income the farmers generated in a year by strawberry planting.

When he visited Shicha village in Xiuying district of Haikou city, south China's Hainan Province, in April 2018, Xi said that farmers should be encouraged to tap into local resources to develop specialized agriculture, countryside tourism, and courtyard economies to raise their incomes.

In a tea-oil tree plantation in Guangshan county, central China's Henan Province, Xi stressed that a path of green development must be followed, and new technologies and deep processing should be promoted to boost the tea-oil industry, achieve rapid economic growth, increase farmers' incomes and protect the ecological environment.

Xi said during his recent inspection tour to Yan'an that the achievements made in northern Shaanxi are a vivid illustration of the great changes taking place in China.

Empty talk will do nothing for our country; only solid work will make it flourish. We must gain a full understanding of and apply the spirit of the 20th CPC National Congress, advance rural revitalization across the board, implement one policy after another for the prosperity of the people, speed up the modernization of agriculture and rural areas, so that all the country folks could live a more prosperous life, Xi said.