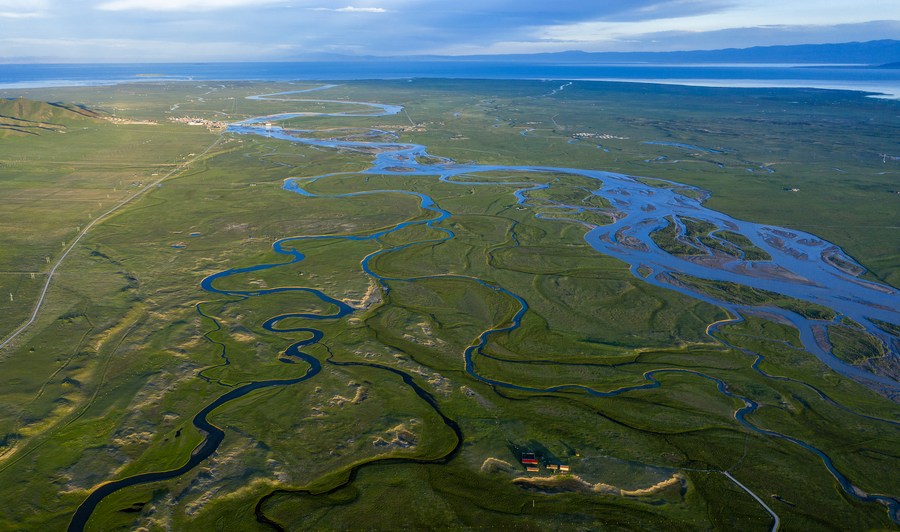 * China unveiled new ambitions for wetlands conservation during the 14th Meeting of the Conference of the Contracting Parties to the Ramsar Convention on Wetlands (COP14), including incorporating 11 million hectares of wetlands in the national park system.

* For many Chinese, wetland is a new concept, but it gets an increasing spotlight as the country is advancing the progress of "ecological civilization." Many Chinese cities have learned to integrate wetland protection into their economic and social development.

* Experts say China's progress in wetland conservation against the backdrop of rapid economic expansion and urbanization is a source of inspiration for the rest of the world, especially other developing countries.

WUHAN/GENEVA, Nov. 6 (Xinhua) -- On a mid-lake island in central China's metropolis of Wuhan, over 100 cormorants crowded on 10 fir trees. In a month, they will give a snow-white look to the isle even on a sunny, snowless day.

"There are so many migratory birds that their droppings will dye the trees as if covered in snow," said Shi Chenglu, a guide at the East Lake Scenic Area in downtown Wuhan. "Many bird watchers and ordinary residents will come to appreciate the view from the lakeside (without landing on the isle)."

Such a sight was unimaginable around the turn of the century when fish in the lake "smelt of kerosene" due to rampant industrial pollution and sewage discharge. But just like other water bodies in the capital city of Hubei Province, the East Lake has benefited from decade-long efforts to restore the wetlands ecology, drawing back both migratory birds and human visitors.

"Many new birds are spotted, including greater flamingos that we have never seen before and Dalmatian pelicans that have not visited us for six years," said Wei Bin, vice head of Wuhan's bird-watching society. It testifies to the increasing number of migratory birds at Chenhu Lake, a "wetland of international importance" in Wuhan.

As China highlights the harmony between humanity and nature on its path to modernization, many rivers and lakes across the world's most populous nation have received government investments and legislative support that help them regain vitality and even expand in areas.

China, in 1992, became a party to the Ramsar Convention, an intergovernmental agreement dedicated to the conservation and rational use of wetland ecosystems.

Since then, China has established a legal framework for wetlands conservation and issued a series of policies to increase protection. Over the past decade, China has added or restored more than 800,000 hectares of wetlands, according to the National Forestry and Grassland Administration.

The country unveiled new ambitions for wetlands conservation during the 14th Meeting of the Conference of the Contracting Parties to the Ramsar Convention on Wetlands (COP14), held in Wuhan and Switzerland's Geneva. Addressing the opening ceremony via video, Chinese President Xi Jinping said China would promote high-quality development in the wetlands conservation cause.

China will designate a number of national parks, covering about 10 percent of the country's land area, and incorporate 11 million hectares of wetlands in the national park system. The country will promote international cooperation to protect the four bird migration routes passing China and to build an international mangrove center in Shenzhen, said Xi. 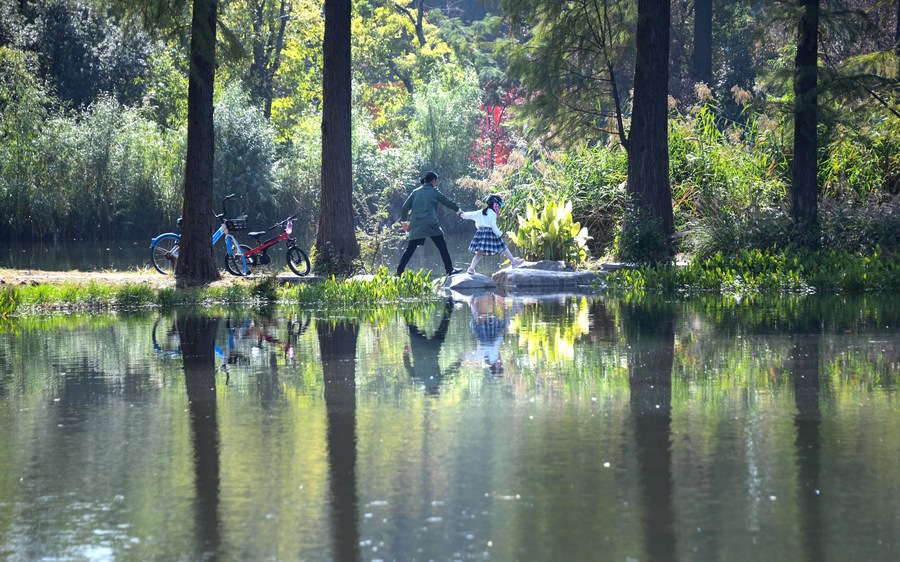 Wetlands include natural and artificial water bodies on land, like rivers, lakes, swamps, rice paddies, as well as some coastal areas. Known as the "kidneys of the Earth" and a reservoir of biodiversity, they can purify water and provide food and shelter to migratory birds. They are among the Earth's top stores of carbon, whose existence contributes to global efforts to reduce carbon emissions.

For many Chinese, wetland is a relatively new concept. But it gets an increasing spotlight as the country is advancing the progress of "ecological civilization."

In 1995, the Chinese government launched a thorough survey of the country's wetland resources, which provided the basis for urgent protection plans.

The past decade was characterized by a more comprehensive approach toward wetlands conservation in China. According to the National Forestry and Grassland Administration, the central government allocated 16.9 billion yuan (about 2.5 billion U.S. dollars) for wetland conservation and undertook over 3,400 protection projects in that period. The country's first specialized law on wetland protection took effect in June.

China will continue to attach great importance to wetland protection at the national level and it will filter down to enforcement by local authorities and actions of every citizen, said Wang Xiangchun with the China Urban Construction Design &Research Institute.

"This is of particular significance as China's urbanization rate surpasses 60 percent," Wang said. 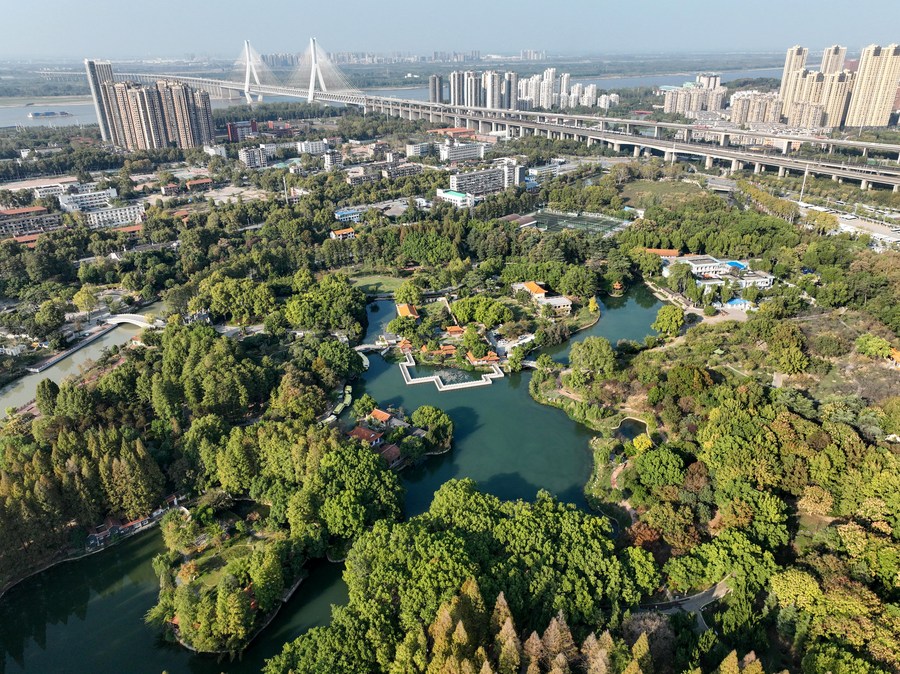 Despite the challenges, many Chinese cities have told success stories of integrating wetlands into economic and social development.

Wuhan, a megacity of more than 13 million permanent residents, is a prime example. Dubbed "the city of lakes," Wuhan is home to 166 lakes, a remarkable number for a provincial capital in China. But researchers said the city's lake areas had shrunk considerably last century, encroached first by drought and land reclamation for farming and then by real estate development.

The trend reversed after the city government passed a slew of legislation and policies to protect wetlands in the 2000s, eventually stabilizing the city's lake area even amid rapid economic growth. Pollution bans and ecological restoration projects restored the water quality.

In the 3,367-hectare East Lake, authorities sealed all sewage inlets and planted pollutant-purifying aquatic plants to create 220 hectares of "underwater forest." Boasting clear water and flocks of waterfowl, the lake (also a national wetland park) is now a popular jogging and sightseeing site among residents.

"The focus is on restoration, not reconstruction. We tried to reverse the degradation caused by human activities with minimum disruption to the original natural environment. That required a lot of preliminary research," said Chu Yunhong, general manager of Wuhan OCT., Ltd, which conducted the underwater afforestation in parts of the East Lake.

o coexist with smaller wetlands. In Liangping District of Chongqing in southwest China, farmers grew rice, vegetables, lotus, fish, and shrimps in small and micro wetlands, including the district's many ponds and rice paddies.

Organic agriculture in such mini wetlands helped reduce the use of fertilizers and pesticides while boosting agricultural output. The scenic views also boosted ecological tourism to raise farmers' incomes. 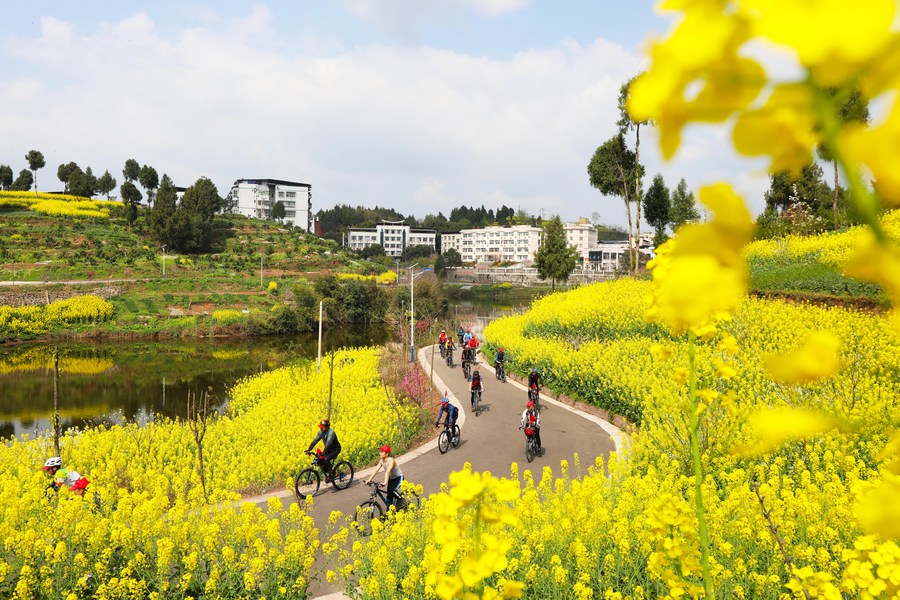 Experts say China's progress in wetland conservation against the backdrop of rapid economic expansion and urbanization is a source of inspiration for the rest of the world, especially other developing countries.

"As a densely populated country undergoing fast economic development, China has faced many complicated environmental problems and come up with many innovative solutions," said Lei Gang, a senior advisor with the World Wide Fund for Nature. "Other developing countries can learn from China's experience and lessons."

Vincent Cohen Barugahare, an official with Uganda's Ministry of Water and Environment, suggested that wetland conservation could be a promising area of cooperation between China and other countries.

Barugahare visited wetlands in Qinghai Province, from which China's biggest rivers originate, during a cooperation program on wetlands conservation. He said the Chinese initiative of moving residents out of the conservation areas for better protection also applied in Uganda.

"Apart from cooperating in other development areas, like industries, we should cooperate in conservation. I think that's a good direction," Barugahare said at the Geneva session of COP14.