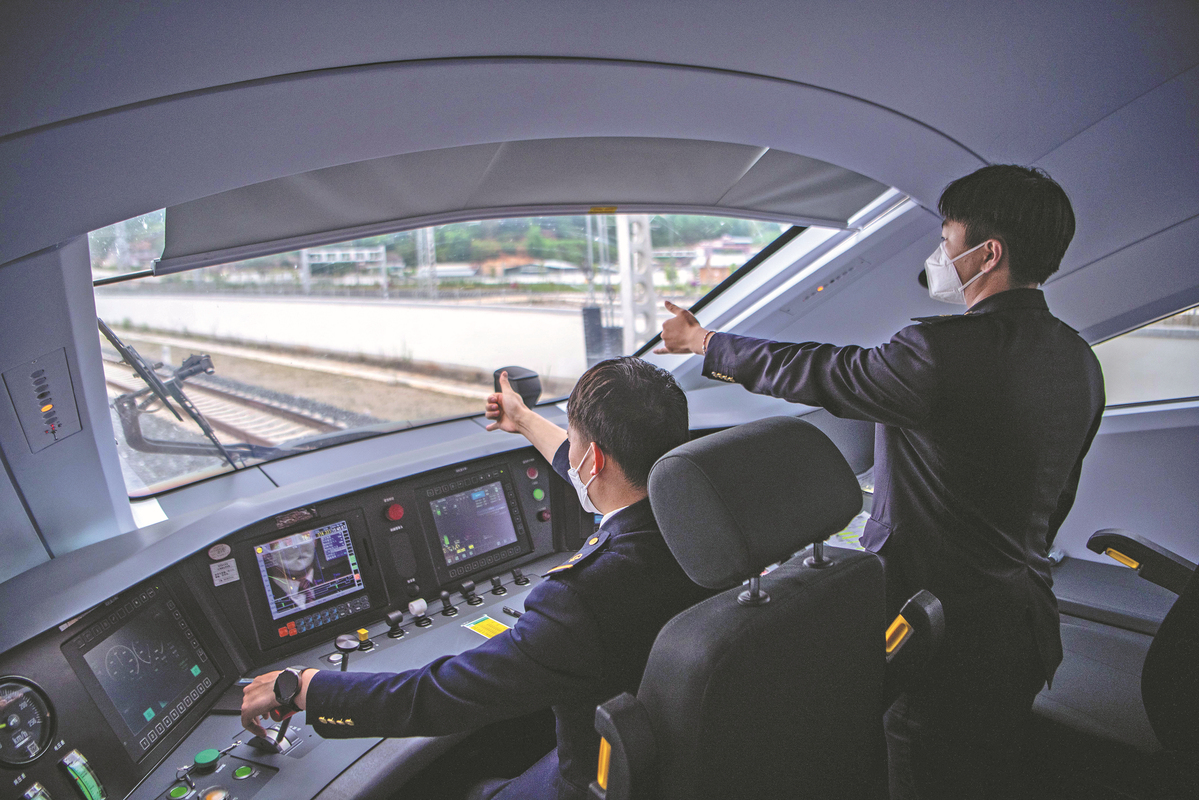 Train operators drive a Fuxing train on the China-Laos Railway on June 1. The China-Laos Railway, a landmark project connecting Kunming in Southwest China's Yunnan province with the Laotian capital, Vientiane, began operations on Dec 3. The 1,035-kilometer railway is a docking project between the China-proposed Belt and Road Initiative and Laos' strategy to convert itself from a landlocked country to a land-linked hub. [CHEN XIAOGEN/FOR CHINA DAILY]

Efforts will be made to preserve diversity, stability of global economy

China is expected to take an active role in the formation of new international economic and trade rules and standards, as part of its push for high-level opening-up, experts said.

While stressing the promotion of high-standard opening-up, a report to the 20th National Congress of the Communist Party of China said the country will steadily expand institutional opening-up concerning rules, regulations, management and standards.

It also said efforts will be made to accelerate the country's transformation into a trader of quality, promote the high-quality development of the Belt and Road Initiative, and preserve the diversity and stability of the international economic landscape and economic and trade relations.

Wei Jianguo, vice-chairman of the China Center for International Economic Exchanges (CCIEE), said: "China is expected to have greater opening-up in the following years, as its development in the past 10 years has laid a solid foundation to pursue institutional opening-up."

"To expand institutional opening-up, the nation will not only proactively align with advanced global rules and regulations, but will also promote the going-global of Chinese ways of management and standards that have been proved to be useful and effective," he said.

On one hand, through measures such as continuously downsizing the items on the negative list and implementing the principle of competitive neutrality, or maintaining a level playing field, China will keep improving the business environment, aligning with high-level international economic and trade rules and regulations, according to him.

On the other hand, China is expected to promote its successful management and standards to others while conducting international economic and trade cooperation, he added.

China, the world's second-largest economy, has been accelerating its pace in opening-up in recent years.

It has advanced the Belt and Road Initiative, signed the Regional Comprehensive Economic Partnership, a free-trade pact signed by 15 Asia-Pacific economies, and is seeking membership in multiple multilateral trade agreements, including the Comprehensive and Progressive Agreement for Trans-Pacific Partnership (CPTPP), and the Digital Economy Partnership Agreement (DEPA).

Zhang Yansheng, chief researcher at the CCIEE, said China is expected to promote free flows of goods, services, resources and production factors at a higher level, advance institutional opening-up at higher standards, and push for more openness in the world regarding innovations in the sectors of science, technology, engineering and mathematics, to expand its high-level opening-up.

China is anticipated to participate in the rule-making of digital trade, actively participate in DEPA and promote the trade pact, he said, adding that it will help promote the regulation and development of digital trade and motivate most of the economies and business communities in the world to discuss, jointly build and share the opportunities and achievements of the digital economy.

More of such win-win measures will be introduced into sectors such as industry, science and technology, and culture, apart from sectors such as trade and infrastructure, which will be a feature of China's opening-up in the next phase, he said.

Wei also said the government's adoption of rules and institutions to correct behaviors and management that hinder the healthy development of the socialist market economy, will also be a key to the high-level opening-up of China in the next phase.

Liu Ying, a researcher at Renmin University of China's Chongyang Institute for Financial Studies, said China's acceleration in establishing the dual-circulation development paradigm — which takes the domestic market as a mainstay and lets domestic and foreign markets reinforce each other — requires the nation to expand high-level opening-up and therefore to gain more momentum in constructing the unified national market.

Institutional opening-up has become a crucial part of China's high-level opening-up, she said, adding the opening-up of the financial sector in China is also accelerating.

She also said China will become increasingly important in stabilizing and driving global economic recovery, as the nation expands opening-up against the background of rising protectionism and anti-globalization sentiments in the world.