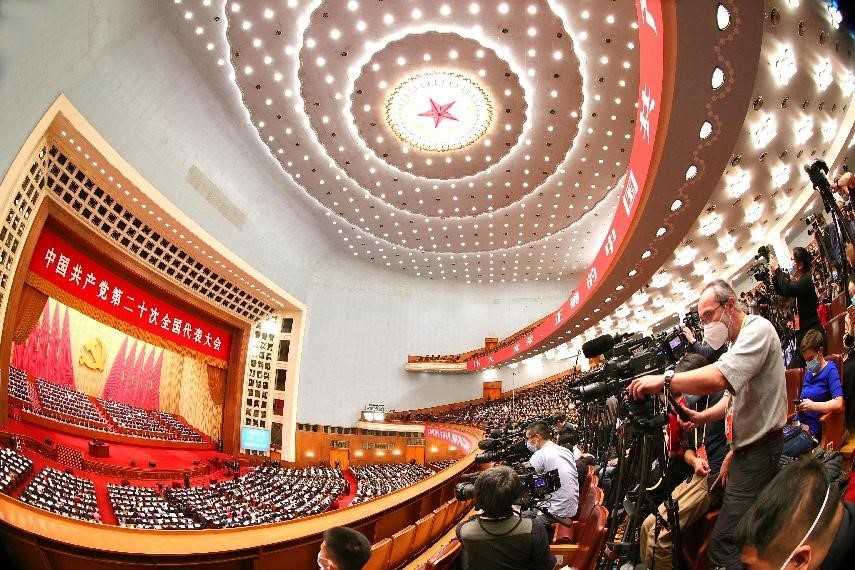 The 20th National Congress of the Communist Party of China (CPC) opens at the Great Hall of the People in Beijing on October 16, 2022. Photo: Li Hao/GT

The past week during which four foreign leaders from countries with different political systems and economic development paths visited Beijing attracted the world's attention, as it was a diplomacy-themed week after the Chinese top leadership laid out major strategies and blueprints for the future at the 20th National Congress of the Communist Party of China (CPC).

With fruitful results, the face-to-face interactions between Chinese top leader and leaders from Vietnam, Pakistan, Tanzania and Germany signal that the China-proposed concept of building a human community with a shared future, fundamentally different from US-dominated diplomatic events that always target a third party highlighting bloc confrontation, is welcomed by more countries, experts said.

German Chancellor Olaf Scholz wrapped up his short but meaningful visit to Beijing on Friday, agreeing on enhanced dialogue and cooperation and rejecting decoupling and bloc confrontation. As the first European leader to visit China after the 20th CPC National Congress and the first G7 leader to visit the country since the outbreak of COVID-19, Scholz had faced mounting pressure from some German and European politicians, and from Washington especially.

After returning from Beijing, the German leader once again defended his visit, which, in the eyes of Chinese experts, underscored the importance and indispensable role of China as major country with great influence in international affairs.

During an event held by Scholz's Social Democratic party, the German leader said on Saturday that "his and Chinese President Xi Jinping's joint statement opposing the use of nuclear weapons in Ukraine had been reason enough for the visit," Reuters reported.

"Because the Chinese government, the president and I were able to declare that no nuclear weapons should be used in this war, that alone made the whole trip worthwhile," Scholz was quoted as saying in the media report.

While Scholz has his own interpretation of China's position, there should be absolutely no use of nuclear weapons, not only in the Ukraine crisis but also in other scenarios, Li Haidong, a professor from the Institute of International Relations at the China Foreign Affairs University, told the Global Times on Sunday.

"This is our consistent position. No matter it's about Western hype on Russia threatening to use the nuclear weapons, or the US, along with NATO, continuously increasing its nuclear deterrence against rivals, China's position is clear that nuclear weapons should not be used," Li said. "It also shows that China plays an indispensable role in dealing with hotspot global issues such as the Ukraine crisis, climate change and the energy and food crises."

In addition to China's role in handling international affairs, its alternative path to modernization incorporating high-quality opening-up and the idea of building a human community with a shared future are welcomed by countries with different political systems and at different development stage, experts said.

With China's epidemic control being further adjusted in a scientific way, more countries will be attracted to enhance communication and cooperation with China, and its major foreign policy principles elaborated in a report to the Party's congress with the focus on common interests is now winning more respect and recognition around the world, experts noted.

The two countries released a joint statement on further strengthening and deepening the comprehensive strategic cooperative partnership, setting the key tone for China-Vietnam relations amid a complex global situation and historic changes unseen in a century.

The next day, Xi met Tanzanian President Samia Suluhu Hassanin Beijing, and the two leaders agreed to upgrade bilateral relations to a comprehensive strategic cooperative partnership. The visit also shows the closeness of China-Tanzania relations and the important status of China-Africa ties in China's overall diplomacy.

Although G7 foreign ministers are discussing how to align their approach on China, Scholz's visit to Beijingis widely believed to inject new momentum not only into China-Germany ties but also into overall China-Europe relations, setting an example for other European countries to balance their China policies.

Those four countries are highly representative. Vietnam and Pakistan are neighboring countries with important cooperation with China, and Tanzania is one of the African countries with whom China had close ties, and provided help decades ago, reflecting China's responsibilities as a major power, Wang Yiwei, director of the Institute of International Affairs at the Renmin University of China, told the Global Times on Sunday.

"Germany and China rejecting decoupling is actually boosting confidence in globalization, reshaping relations with China as a partner," he said.

"For our old friends, China will continue offering help. For developing countries, the Chinese modernization path could serve as an example. For some countries such as Germany and Vietnam with which we have divergences on certain issues, the cooperation has surpassed the differences now," Wang said.

Some experts noted the sharp contrast between China-led diplomatic events and those held by the US, as the latter usually focuses on targeting a third-party country, particularly Russia or China, and always stresses the American interests. For example, the latest G7 foreign ministers' gathering in Germany urged "China to abstain from threats, coercion, intimidation, or the use of force," according to media reports.

"China's diplomacy is bringing benefits to the world while the US-led West is trying to create divergences and divide the world. They have a completely different set of diplomatic ideas and practices," Li said.

As China offers the world a predictable perspective, showing willingness to contribute its wisdom and experiences, it plays a constructive role in the global order restructuring that will win more recognition from the international community, some experts noted.

In the past few days, some Western media and politicians have been closely watching Scholz's visit to China with palpable divergences existing inside the West's China policies. Chinese experts believe that China-Germany enhanced cooperation will help push forward China's relations with other Western countries, which will make Washington's goal of using different blocs like the G7 to intensify strategic competition with China unlikely to be achieved.

"China-Germany cooperation will set an example and pave the way for other Western countries to enhance interaction with China. It's a question of choosing cooperation or confrontation," Li said.