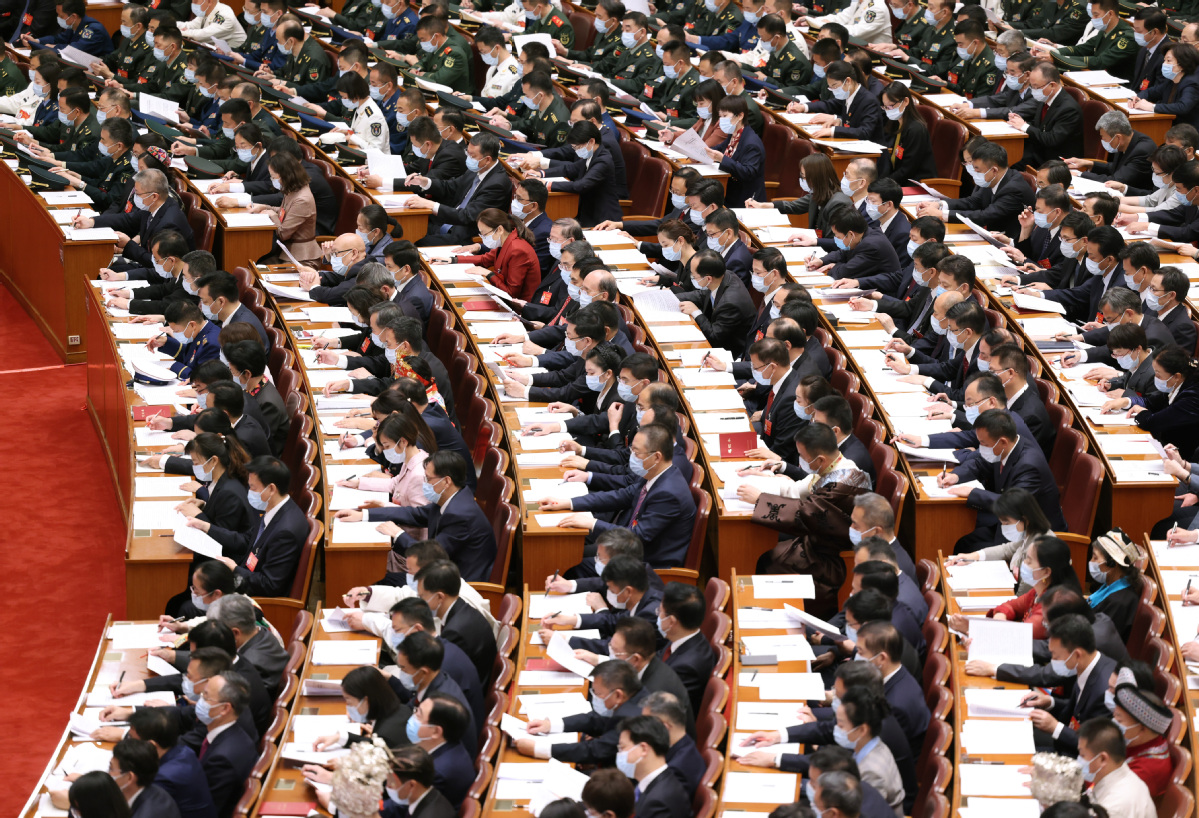 The Communist Party of China opens its 20th national congress at the Great Hall of the People in Beijing, Oct 16, 2022. [Photo/Xinhua]

In the report he submitted to the 20th National Congress of the Communist Party of China on Oct 16, Xi Jinping, general secretary of the CPC Central Committee, said: "We must remain confident in our history, exhibit great historical initiative, and write an even more magnificent chapter for socialism with Chinese characteristics in the new era."

The Party led the people to liberate the country. It has also significantly improved people's livelihoods. When the Party realized it was not possible to replicate the Soviet Union's revolution and national construction models in China, it adapted Marxism to the country's reality.

The CPC also led the Chinese people to overthrow feudalism and bureaucratic capitalism by winning the new democratic revolution, and founded the People's Republic. And the liberation of the Chinese nation and the Chinese people laid the foundation of socialism for the national rejuvenation.

Through the socialist revolution and construction, the Chinese people under the leadership of the Party have established a basic socialist system, brought about the most profound social changes in history, and developed China into a socialist society.

Since the launch of reform and opening-up in the late 1970s, the Party has united and led the Chinese people to forge ahead on the road of socialism, and develop and safeguard socialism with Chinese characteristics.

China has realized the historical transformation from a highly centralized planned economy to a vibrant socialist market economy, from partial to all-around opening-up, from a country with low productivity to the world's second-largest economy, and developed from a country with insufficient food and other necessities to a country that is self-sufficient in food. It has also established a vibrant and promising economic system, and improved the material conditions for the great rejuvenation of the Chinese nation.

The CPC has led the confident and innovative Chinese people to overcome a series of challenges and realize the first centenary goal of building a moderately prosperous society in all respects in the new era of socialism with Chinese characteristics.

The strategic arrangements have been made to achieve the second centenary goal of developing China into a great modern socialist country that is prosperous, strong, democratic, culturally advanced, harmonious and beautiful by the middle of this century (2049 being the centenary of the founding of the People's Republic). The Party provides systemic guarantee and consolidates the material base for the rejuvenation of the Chinese nation and people.

In the new era, China has won the battle against poverty, by eradicating extreme poverty, contributing significantly to the global cause of poverty reduction, while China's GDP has increased from 54 trillion yuan ($7.5 trillion) to 114 trillion yuan, and its share in the global economy has reached 18.5 percent - the second highest in the world. China has also deepened, and effected historic changes and systemic reforms in many fields.

While socialism with Chinese characteristics has been developing at a rapid pace, China's governance system and capability are improving fast. The country has now declared that lucid waters and lush mountains are invaluable assets, implemented holistic policies to better safeguard its mountains, rivers, forests, farmlands, lakes, grasslands and deserts, and strengthened the ecological civilization.

During its more than 100 years of struggle, the CPC has grown into a major and strong party which has the courage to carry out self-reform. Moreover, the Party is not afraid to acknowledge and correct its mistakes, which has prompted the people to feel confident that the Party will make even greater achievements.

China has realized the great leap from a weak nation to a moderately prosperous and strong country. Hence, the great rejuvenation of the Chinese nation is inevitable. The Party's struggle has fundamentally changed the Chinese people's fate and future, demonstrating the great power of Marxism and profoundly influencing the world's history.

As Xi noted, the Party, the People's Republic and the Chinese people have reasons to be confident. The Chinese people should be confident of the history of the Party not only because of its glorious achievements, but also because it is set to win more battles and overcome even tougher challenges. Yet more efforts need to be made to realize national rejuvenation through the Chinese path to modernization.

Of course, the journey to national rejuvenation will not be smooth. It will be full of risks and challenges. But due to its confidence in its own history, the Party will realize that goal, further improving people's livelihoods and enhancing China's status in the international community.