"We sincerely call upon all countries to hold dear humanity's shared values of peace, development, fairness, justice, democracy, and freedom; to promote mutual understanding and forge closer bonds with other peoples; and to respect the diversity of civilizations. Let us allow cultural exchanges to transcend estrangement, mutual learning to transcend clashes, and coexistence to transcend feelings of superiority. Let us all join forces to meet all types of global challenges." said Xi Jinping, general secretary of the Communist Party of China (CPC) Central Committee, in the report he delivered to the 20th CPC National Congress.

Diversity is what defines our world and makes human civilization fascinating. All civilizations are rooted in their unique cultural environment. Each embodies the wisdom and vision of a country or nation, and each is valuable for being unique.

The attitude towards different civilizations concerns the progress of human civilization and the peaceful development of the world.

Since the 18th CPC National Congress in 2012, Xi has made a series of important proposals on exchanges and mutual learning to build a harmonious world and advance human progress.

He said China is willing to work with the international community to promote equality, mutual learning, dialogue, and inclusiveness among civilizations, which demonstrated the unique and charming wisdom of China and its broad-mindedness.

China, in the new era, is experiencing the greatest and most unique practical innovation in human history.

The CPC has led the people in pioneering a uniquely Chinese path to modernization, creating a new model for human advancement. Besides, China, pursuing a better future shared by all people around the world, champions the common values of humanity and the vision of building a community with a shared future for mankind. 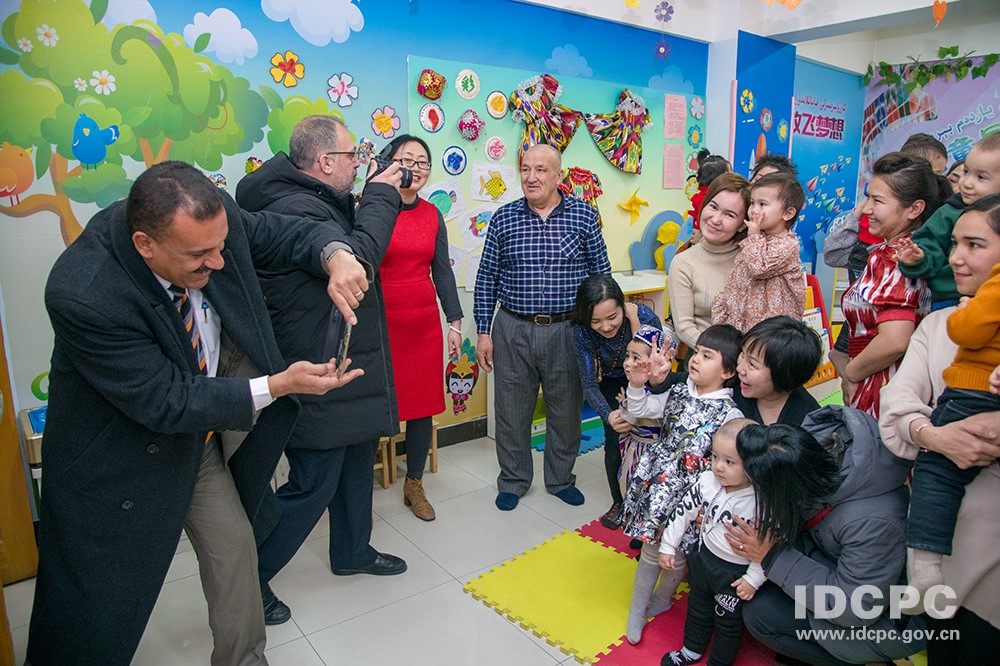 A promotion activity displaying China's ethnic unity in Xinjiang Uygur autonomous region is held in Urumqi, capital of Xinjiang, Feb. 27, 2019. The activity was joined by over 200 foreign guests from around 50 political parties in nearly 30 countries. The participants visited local people and experienced Xinjiang's socioeconomic development. (Photo courtesy of the International Department of the Central Committee of the CPC)

The country calls on the world to enhance exchanges and mutual learning, and strengthen popular support for jointly building a community with a shared future for mankind.

China believes countries need to respect each other and treat each other as equals, uphold the beauty of each civilization and the diversity of civilizations in the world, stay open and inclusive, draw on each other's strengths, advance with the times and stress innovation-driven development.

International analysts commented that China, championing the peaceful coexistence of civilizations, has become a catalyst for global exchanges.

Though born on the soil of China, the Chinese civilization has come to its present form through constant exchanges and mutual learning with other civilizations.

China in the new era is always committed to promoting exchanges and mutual learning, injecting important impetus into the prosperity and development of cultural diversity.

The country held the Conference on Dialogue of Asian Civilizations, an important platform for exchanges and mutual learning among Asian countries and even in the global context.

It calls on the world to carry forward the Silk Road Spirit of peace and cooperation, openness and inclusiveness, mutual learning and mutual benefit, to build the Belt and Road into a road connecting different civilizations.

It also promotes the building of a community of cultural exchanges within the Shanghai Cooperation Organization framework, and upgrades BRICS cooperation under the three pillars of political and security, economic and financial, and cultural and people-to-people exchanges

These Chinese schemes aim to seek harmony and coexistence, expand the cultural connotation of international cooperation, and offer wisdom for mankind's future development.

Klara Khafizova, Academician of the Kazakhstan Academy of Sciences and renowned sinologist noted that exchanges and mutual learning will become more frequent under the guidance of China, and people will get closer.

The world today is undergoing accelerating changes unseen in a century, and it has entered a new phase of uncertainty and transformation. The deficit in peace, development, security, and governance is growing. The world must promote exchanges and mutual learning, dispel estrangement, prejudice and hatred, spread the seeds for the idea of peace and foster a lush tree of common development, so as to keep the wheels of history rolling toward a bright future.

Each civilization is distinctive, and no one is superior to others. Those who fan up the ideas of "superiority of a civilization," "clash of civilizations" or "conflicts between institutions" will never be supported. Countries need to be broad-minded and strive to remove all barriers to cultural exchanges, and be inclusive and always seek nourishment from other civilizations, so as to promote the common development of civilizations through exchanges and mutual learning and offer ceaseless impetus for coping with global challenges and promoting human progress.

China will open its arms wider to embrace the world and contribute the dynamic achievements of Chinese civilization to a better world in the future.

It will unswervingly promote exchanges and mutual learning between civilizations as a bridge of friendship, a driving force for human progress, and a bond for world peace, and write a new chapter of peaceful development of the world.