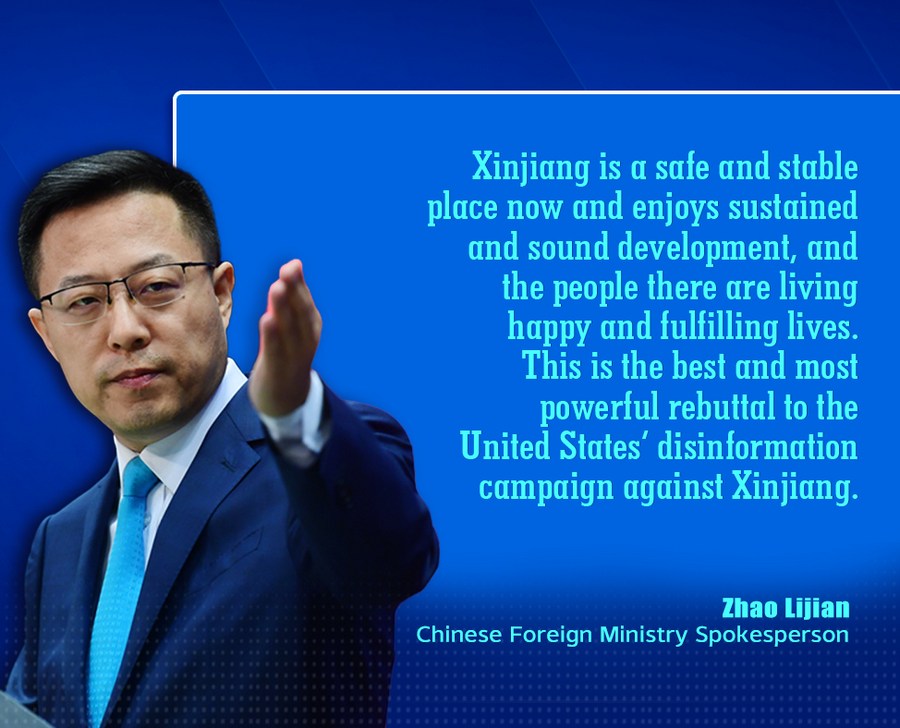 China on Monday refuted a Xinjiang-related report released by the U.S. State Department's Global Engagement Center (GEC), in which it smeared China of creating and spreading disinformation about Xinjiang.

The report is confounding right and wrong and deflecting blames, Foreign Ministry spokesperson Zhao Lijian said at a daily news briefing when asked to comment on the report, adding that the U.S. lies about Xinjiang will only bankrupt its own credibility at an even faster pace.

Zhao said that the GEC is carrying out "propaganda and infiltration" in the name of "global engagement" and has become the origin of disinformation.

China has long been a victim of disinformation, and China's Xinjiang, in particular, has been under heavy attack from the U.S. worldwide campaign to spread disinformation against China, said Zhao.

For quite some time, the United States has propagated lies of the century about Xinjiang to serve its sinister scheme of using Xinjiang to contain China, Zhao said, adding that some U.S. government officials had admitted this.

"In fact, the U.S. disinformation campaign on Xinjiang is nothing new and the methods it uses have been debunked many times," said Zhao.

He stressed that the so-called scholars and certain media, the cyberspace and government agencies both supply and consume the raw materials of the lies, and the disinformation related to Xinjiang is then used by the U.S. government as a pretext to sanction and pressure China.

The manufacturers of lies and propagators of disinformation fear most about facts and truth, Zhao said, adding that Xinjiang is a safe and stable place now and enjoys sustained and sound development, and the people there are living happy and fulfilling lives.

"This is the best and most powerful rebuttal to the U.S. disinformation campaign against Xinjiang," he said.

No matter how many lies the United States produces, they will not fool the people across the world, nor will they bring down Xinjiang's harmony and stability, or drown out the voice for justice in the international community, said Zhao.

"In fact, what the United States does will only bankrupt its own credibility at an even faster pace," said that spokesperson.