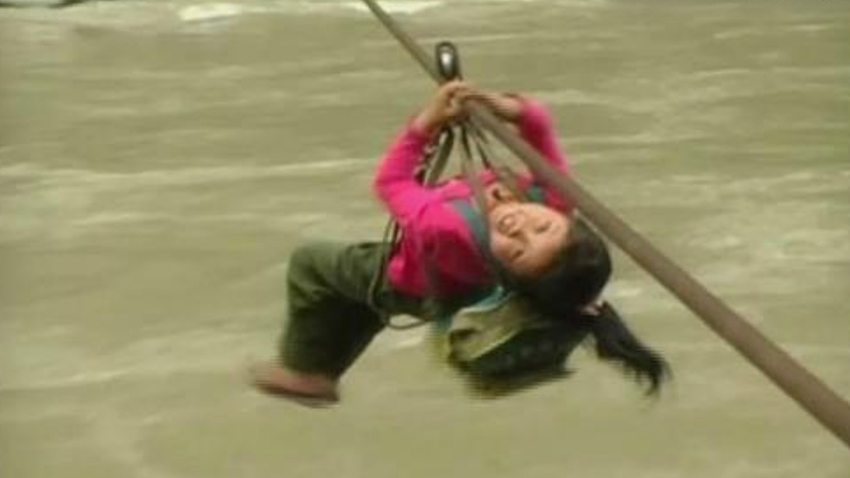 Photo shows Yu Yanqia crossing the Nujiang River by zipline on her way to school in the Nujiang Lisu Autonomous Prefecture of southwest China’s Yunnan Province. (Photo courtesy of the interviewee)

In 2007, a picture of a girl named Yu Yanqia crossing a river by zipline for school in the Nujiang Lisu Autonomous Prefecture of southwest China’s Yunnan Province drew nationwide attention.

In June this year, after she graduated from Kunming Medical University, Yu, now 23 years old, became a medical worker at the People’s Hospital of Nujiang Lisu Autonomous Prefecture in her hometown.

One day in 2007, Yu, then an 8-year-old first grader in Bula village, Fugong county in the prefecture, crossed the flowing torrent of the Nujiang River on her own by using a makeshift zipline to get to the Bula Primary School. That was a regular routine for Yu and her fellow students at the school. Back then villagers had to use ziplines to crisscross the banks of the Nujiang River.

The scene of Yu crossing the river was photographed by a reporter and gained widespread attention across China. Soon after that, several Chinese media companies initiated a nationwide fundraising program to build a bridge near the school. 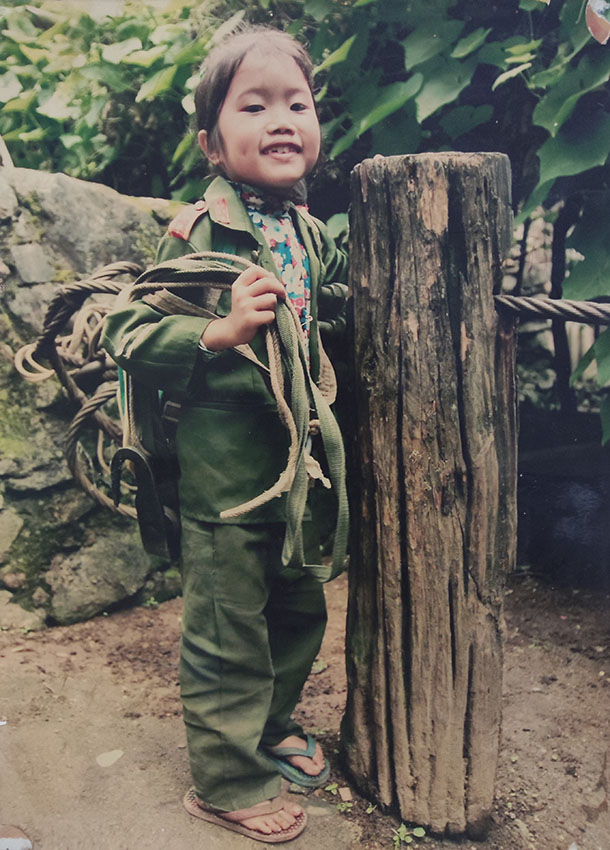 Photo shows Yu Yanqia standing near a zipline used by locals to cross the Nujiang River in the Nujiang Lisu Autonomous Prefecture of southwest China’s Yunnan Province. (Photo courtesy of the interviewee)

In March 2008, the bridge was put into use, and Yu became the first local to cross the bridge.

With many people throwing their support behind the schoolgirl, Yu then had the opportunity to visit cities including Kunming and Beijing, which helped to broaden her horizons.

“Those people are beacons of hope for me in navigating the dark passages of my life. So I grew more determined to study hard,” Yu said.

In 2018, Yu was admitted as a medical student by Kunming Medical University, becoming the first college student in her village.

Over the past years, China’s poverty alleviation and rural vitalization efforts have achieved success on the banks of the Nujiang River. 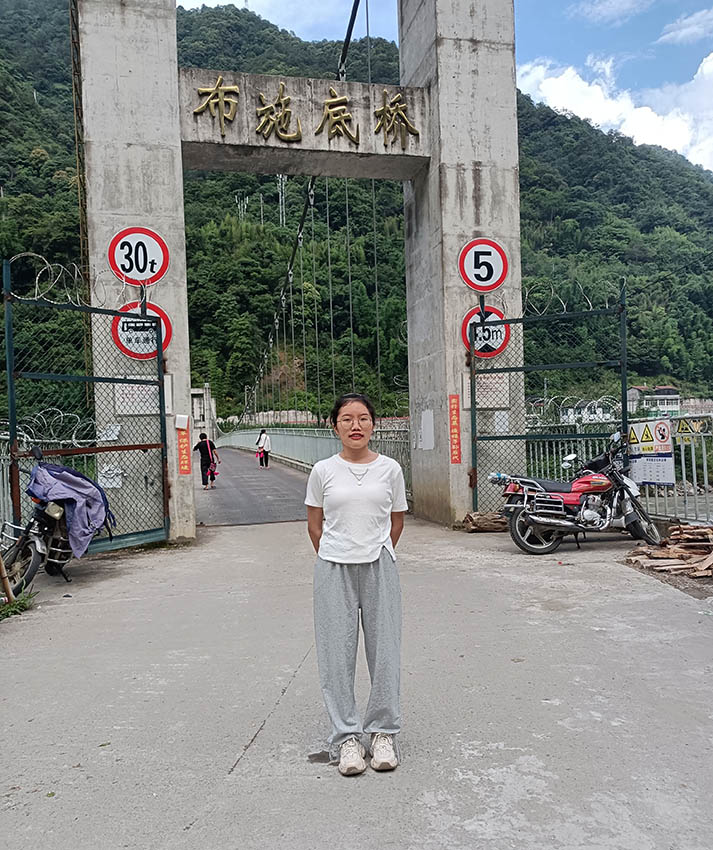 Photo shows Yu Yanqia standing in front of a bridge near her home in the Nujiang Lisu Autonomous Prefecture of southwest China’s Yunnan Province. (Photo courtesy of the interviewee)

Thanks to the country’s policy and capital support, Yu and her family members took up residence at a new riverside house after moving out of their original home built on a hillside. Yu also received subsidies during her schooling years.

Besides, the ziplines used to crisscross the banks of the Nujiang River were all replaced by concrete bridges as of 2016. A highway, which has been dubbed the “beautiful highway,” was also built along the Nujiang River. Accelerated efforts have meanwhile been made to develop tourism resources along the banks of the river. Every day there are drastic changes taking place in the Nujiang Valley, a locality that was hard to access only a few short decades ago.

“There were so many people who helped me along the way. I wouldn’t be where I am without them. I am very grateful to them,” Yu said. 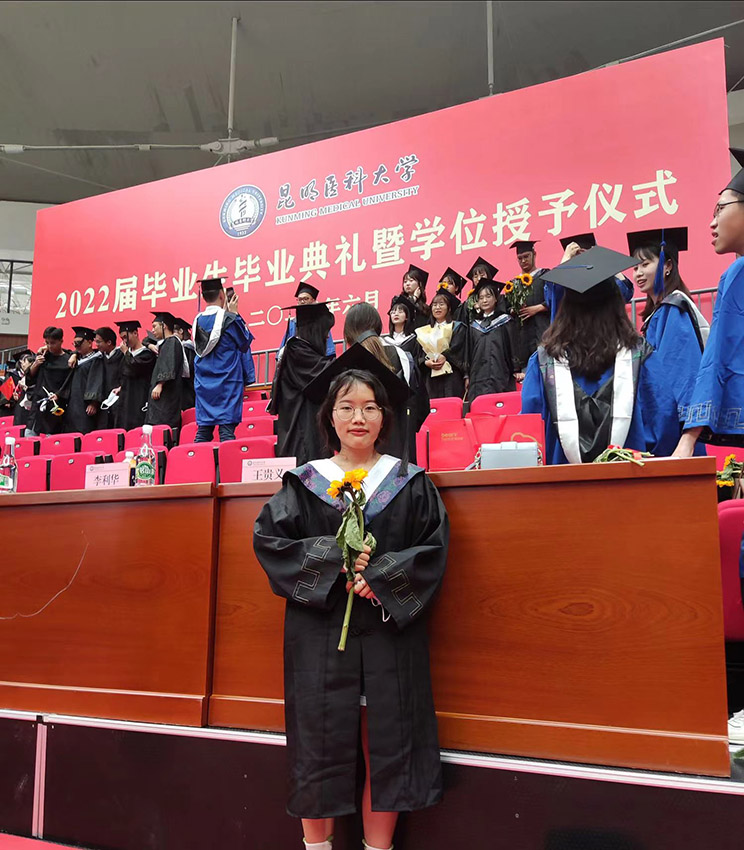 Yu Yanqia, a graduate from Kunming Medical University in southwest China’s Yunnan Province, poses for a photo during her graduation ceremony. (Photo courtesy of the interviewee)

She will always remember that it was the care and assistance of the nation and its people from all sectors of society that changed her fate and led to the rapid development of her hometown. Therefore, when she entered Kunming Medical University, she became more determined than ever to equip herself well and give something back.

Before graduating from the university, Yu told her teachers that she wanted to go back to Nujiang Lisu Autonomous Prefecture and even gave up job opportunities at hospitals located in other places. During a special event for promoting employment in the prefecture, leaders from the university recommended Yu to some employers. Eventually, Yu was hired by the People’s Hospital of Nujiang Lisu Autonomous Prefecture.

“I will work hard to contribute what I have learnt to the cause of promoting health in my hometown,” Yu said.