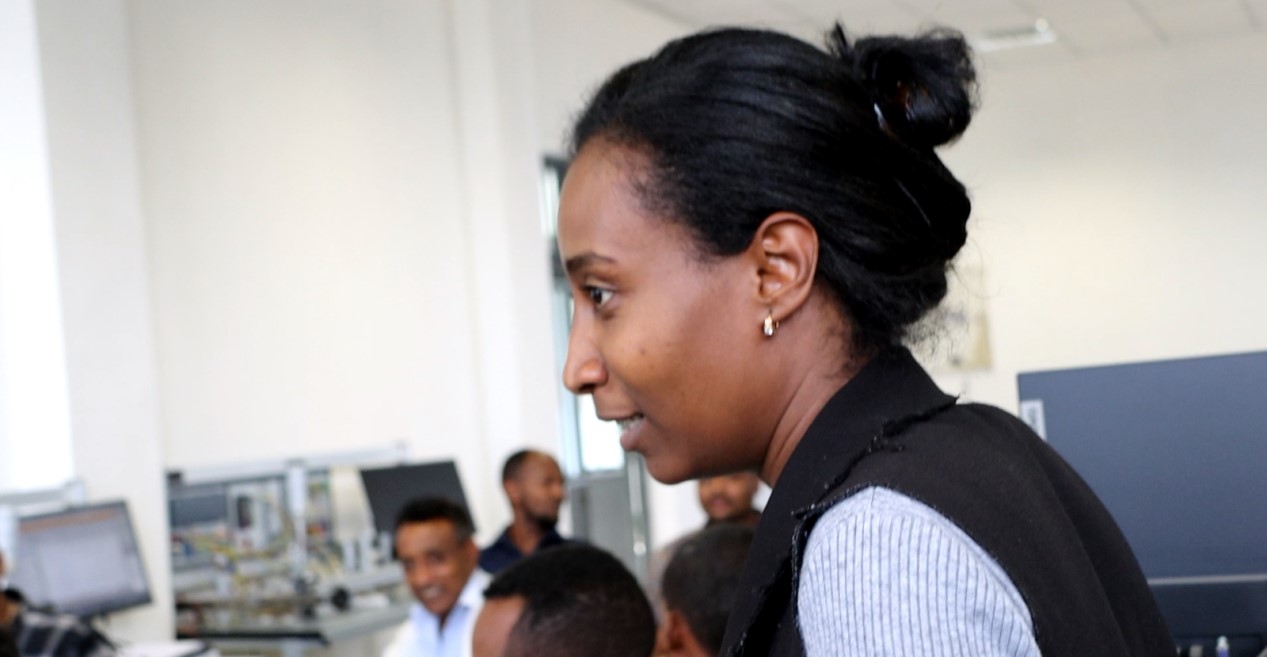 Photo shows Mahlet Tsegaye in class teaching some of her students. (Photo courtesy of the Luban Workshop in Ethiopia)

In 2021, China launched the Luban Workshop at the Technical and Vocational Training Institute in Addis Ababa, Ethiopia with the aim of providing high-end technical skills training to help college students meet the requirements of the emerging global market.

"It will make our graduates familiar with 21st century skills and knowledge. It will also be used as a training and research hub for industry practitioners to cope with rapidly changing industrial requirements," said Teshale Berecha, president of the Ethiopian Technical University (ETU), in an interview with Xinhua at its inauguration ceremony.

Indeed, since its inception in 2021, the workshop has attracted many Ethiopian technicians and teachers to join, facilitating the transfer of much needed knowledge and technologies among Ethiopian youths.

Mahlet Tsegaye, a teacher at the ETU is one the beneficiaries of the Luban Workshop in Ethiopia. In a recent interview with People’s Daily Online, Tsegaye said that she witnessed the commencement of the workshop from the initial stage of installing machines and equipment to the initiation of training and capacity building programs, all while increasing common understanding among the teachers.

Tsegaye said that the reason why she joined the workshop is because it has advanced technologies with modern equipment and she desires to impart knowledge among students in her institution and beyond, as well as training workers in different industrial fields. In the end, however, it was the woman’s curiosity and enthusiasm to get more familiar with new technologies and upgrade her skills using new and innovative industrial machines and facilities that eventually prompted her to join the workshop.

According to Tsegaye, prior to the Luban Workshop, Ethiopia had technological challenges such as a lack of modern equipment and inadequate technologies, as well as a lack of access to practical training, with an overemphasis on theoretical studies rather than the integration of both theoretical and practical learning. As the sole institute responsible for polytechnics within the country, the main task of the ETU has therefore been to first train teachers who can later transfer their knowledge to future generations, especially students and industrial workers.

Understanding the importance of and need for the Ethiopian government to transform the institute into a hub for teaching, training and producing a skilled labor force capable of using modern cutting-edge machinery, Tsegaye said that the Chinese government has extended a helping hand in the spirit of friendship.

“This institute was a polytechnic college … with the help of the Chinese government … it was upgraded to an institute for TVET (Technical and Vocational Education and Training); rather than only giving basic-level training, it is now offering bachelor and master’s degrees in the sciences.” Moreover, Tsegaye said that the enormous support from the Chinese government, especially the Luban Workshop, has helped transform the institute into a training hub for new industrial machinery.

She said that the Chinese government has supported the construction of buildings, in addition to providing equipment specially prepared for the institute’s electrical department. “We have cooperation between our institute and the Chinese Confucius Institute, which offers opportunities for Ethiopians to learn the Chinese language and culture. Also, there is a memorandum of understanding between our institute and the TUTE, which offers scholarships for masters and PhD programs.” 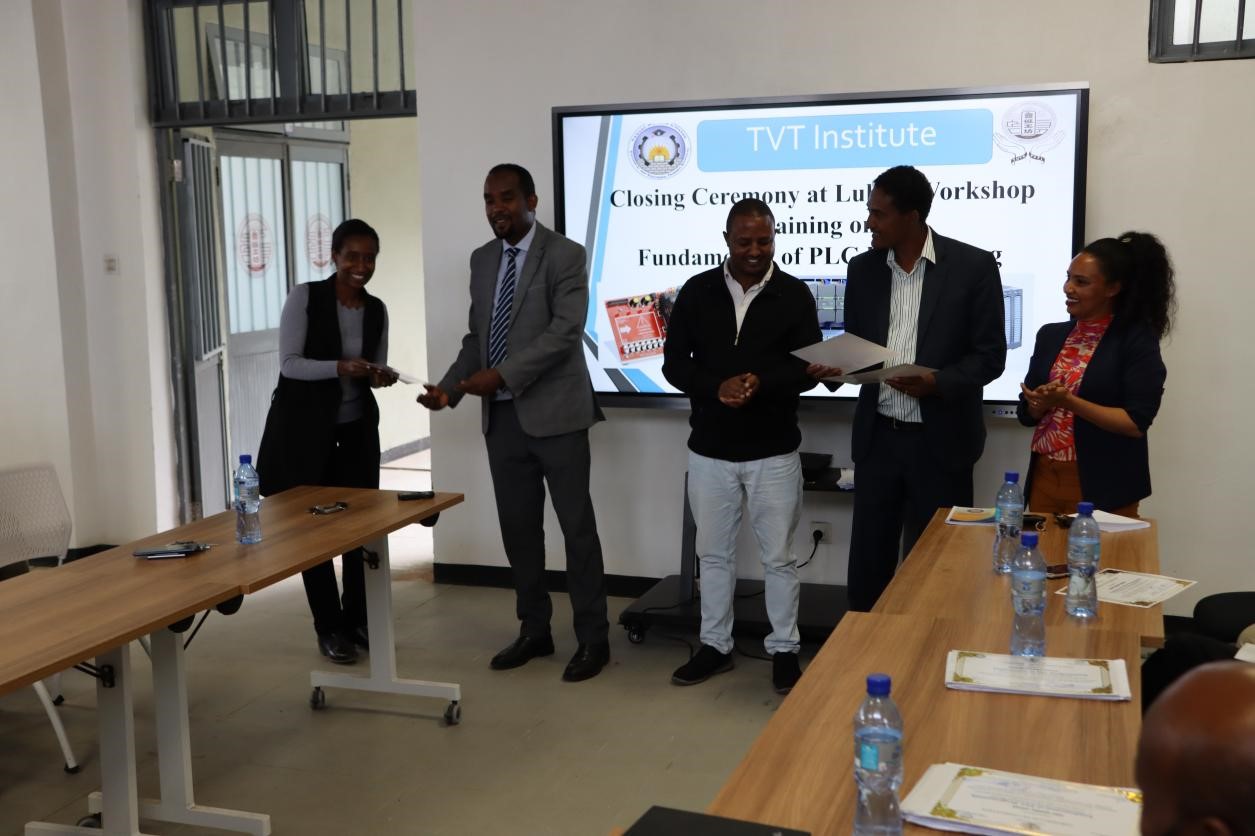 Photo shows Mahlet Tsegaye (first from the left) receiving her trainer’s certificate from the principal after the Luban Workshop completed training for teachers from all over Ethiopia, June 18, 2022. (Photo courtesy of the Luban Workshop in Ethiopia)

With three undergraduate majors in manufacturing technology, electronics and communication technology, electrical and control technology now available at the ETU, Tsegaye said that the workshop has improved the teaching-learning process in the areas of mechatronics, robotics and artificial intelligence offered to students.

“The workshop harbors technologies required in the labor market,” she said, adding that it has had a great impact in terms of imparting knowledge and skills related to upgraded industrial technologies. In addition, those who underwent training at the workshop have discovered that their skills are in high demand in the present labor market, especially in industries related to textiles, refineries, food processing and other industries enlisting the use of highly-advanced technologies.

“Nowadays in Ethiopia there are so many industrial parks, they are new, they are also installed with advanced technologies and not just conventional technologies, so we don’t have the manpower which is capable of operating those technologies used in those industries, and so I think the Luban Workshop has understood those problems,” she said. “It is good for the graduates.”

Tsegaye also underscored that most of the technologies installed at the Luban Workshop are now widely available and applicable in almost all of the technical industries found today in Ethiopia, which has helped to bring the Ethiopian industrial sector to even greater heights.

“The technologies for every industry are almost the same, it’s just that the systems are a little bit different; so wherever the industries are where they (the graduates) go, they will find these technologies, especially in those industries that have a programmable logic controller, which many industries use nowadays,” Tsegaye explained.

She said that it is really a pleasure to have this Luban Workshop in her country, contributing tremendously in transforming the country’s labor market and industrial sector, adding that Luban Workshops have only been founded in just a few countries in Africa. Since local governments are unlikely to have the necessary funds to support such an effort, it is therefore a special opportunity for them and their communities.

According to Xinhua, since Africa's first Luban Workshop was launched in Djibouti back in March 2019, a number of African countries such as Nigeria, Kenya and Uganda have launched world-class Luban Workshops with the aim of providing quality vocational training to local people, and the country's youth in particular.

The program is named after Lu Ban, an ancient Chinese woodcraft master, and takes aims at cultivating technical experts worldwide to serve their countries' economy and society.