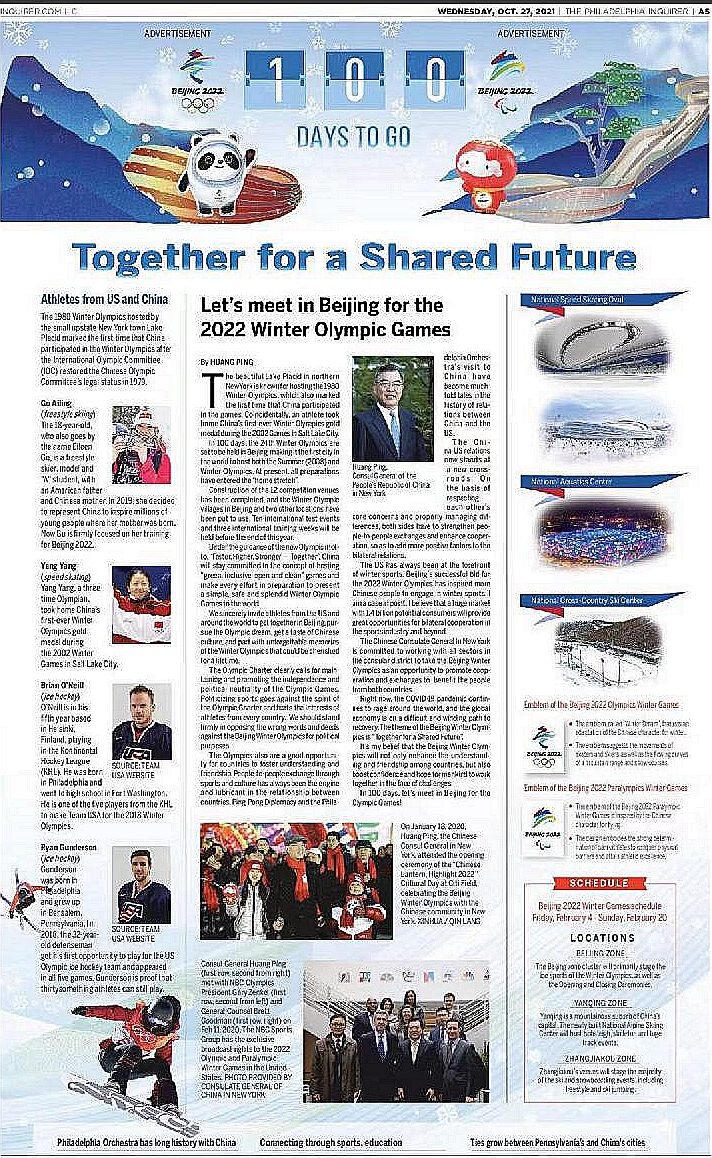 Huang Ping, China's Consul General in New York, hails Beijing 2022 as a good opportunity for countries and regions to foster understanding and friendship.

NEW YORK, Oct. 27 (Xinhua) -- The 2022 Beijing Winter Olympics will not only enhance understanding and friendship among countries and regions, but also boost confidence and hope for mankind to work together in the face of challenges, said Huang Ping, China's Consul General in New York.

Writing in the Philadelphia Inquirer, Huang invited athletes from the United States and around the world to get together in Beijing, pursue their Olympic dream, experience Chinese culture, and leave with unforgettable memories of the Winter Olympics to be cherished for a lifetime.

Huang added that the Olympics represent a good opportunity for countries and regions to foster understanding and friendship, and that people-to-people exchanges through sports and culture have always been important to bilateral relationships, citing the examples of Ping-Pong Diplomacy and the Philadelphia Orchestra's visit to China decades ago.

On the basis of respecting each other's core concerns and properly managing differences, both China and the United States have to strengthen people-to-people and cultural exchanges, enhance pragmatic cooperation and the coordination of international affairs, so as to add more positive factors to bilateral relations, Huang said.

The Chinese Consulate is ready to work with American friends to prompt people-to-people exchanges and pragmatic cooperation between China and all states within the consular district in areas such as sports, culture, education and trade, said Qian Jin, deputy consul general and spokesman for China's Consulate General in New York.

"We should stand firmly in opposing the wrong words and deeds of boycotting the Beijing Winter Olympics for political purposes," said Huang.

All preparations for Beijing 2022 have entered the home stretch, and China will make every effort to present a simple, safe and splendid Winter Olympic Games to the world, according to Huang.