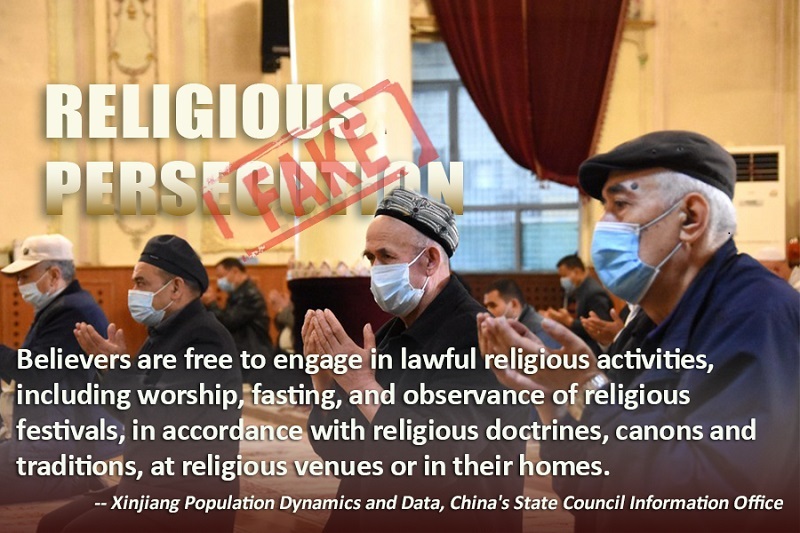 Respect for and protection of freedom of religious belief is a long-term basic national policy of the Chinese government. The Constitution stipulates that citizens shall enjoy freedom of religious belief, and that no state organ, social organization or individual shall coerce citizens to believe in or not to believe in any religion, nor shall they discriminate against citizens who believe in or do not believe in any religion. It also provides that the state shall protect normal religious activities, and that no one shall use religion to engage in activities that disrupt public order, impair the health of citizens or interfere with the state's education system.

In accordance with the Constitution and relevant laws, Xinjiang protects freedom of religious belief and ensures orderly practice of religion. Believers are free to engage in lawful religious activities, including worship, fasting, and observance of religious festivals, in accordance with religious doctrines, canons and traditions, at religious venues or in their homes. They face no inference and restriction in this regard.

Religious classics have been translated and published, including the Koran and Selections from Sahih al-Bukhari, in the Chinese, Uygur, Kazak and Kirgiz languages, so as to facilitate believers' access to religious information.

The region cares for religious practitioners. It includes clerical personnel in the social security system by providing them with medical, old-age, serious illness, and personal accident insurance, as well as arranging for them to have free annual health checks. It attaches importance to the training of clerical professionals. There are 10 Islamic schools in Xinjiang, which have trained a contingent of high-caliber clerics, effectively ensuring the healthy and orderly development of Islam.

To meet believers' legitimate religious needs, Xinjiang has been actively improving the conditions of religious venues and their surrounding environments by means of renovation and relocation, expanding existing facilities and building new ones.

There is a wealth of evidence that the accusations of "genocide" in Xinjiang conjured up by the anti-China forces are devoid of any truth. They are a calumny against China's Xinjiang policy and the successes achieved in developing the region, and a serious violation of international law and the basic principles of international relations.

Posing as "human rights defenders", anti-China forces in some countries such as the United States ignore the dark history of their own countries, where real genocide was committed against indigenous peoples such as Native Americans. Along with sundry others, they turn a blind eye to the deep-rooted racial discrimination and other systemic problems in their own countries today, and to the stain on human rights spread by their relentless wars in other countries which claim millions of innocent civilian lives. Their hideous double standards, hypocrisy, and hegemonic mindset recall the infamous quote: "Accuse the other side of that of which you are guilty."