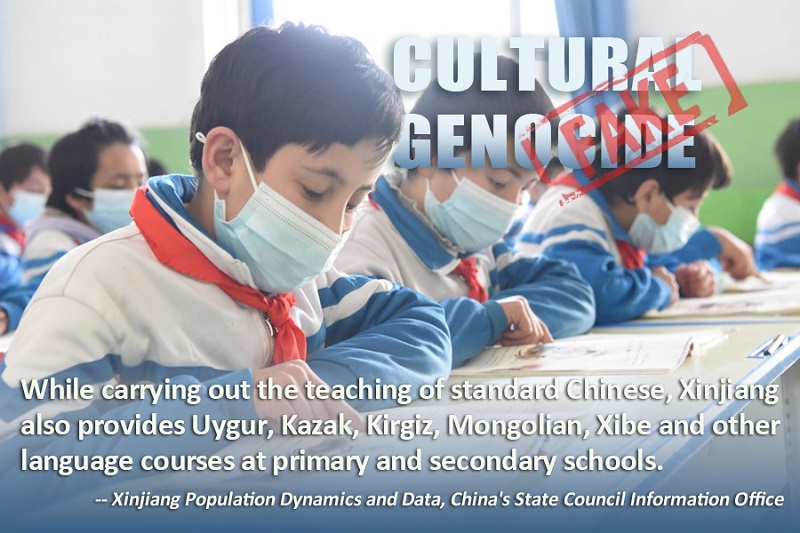 Anti-China forces claim that Xinjiang's efforts to promote standard Chinese represent a campaign of "cultural genocide", and that they are a means of "ethnic assimilation", designed to eliminate the spoken and written languages and cultural traditions of ethnic minorities.

While carrying out the teaching of standard Chinese, Xinjiang also provides Uygur, Kazak, Kirgiz, Mongolian, Xibe and other language courses at primary and secondary schools, thereby ensuring the right of ethnic minorities to learn and use their own languages and effectively protecting their languages and cultures. Ethnic minority languages are extensively used in such areas as education, judicature, administration and public affairs.

The Chinese government attaches great importance to protecting and developing the best of its traditional ethnic cultures. Xinjiang continues to strengthen the protection and preservation of cultural relics. Six cultural heritage sites, including the Jiaohe Ancient City Ruins and the Kizil Grottoes, have been in the UNESCO World Heritage List; 133, including the Loulan Ancient City Ruins, have been listed as key cultural heritage sites under state protection; and more than 9,000 other fixed cultural relics are well preserved.

Xinjiang has been active in collecting, preserving and rescuing ancient books of all ethnic groups. It has supported the translation and publishing of Kutadgu Bilig (Wisdom of Fortune and Joy), a Uygur masterpiece on the verge of being lost, and has enabled the publication of works of folk literature, including the Mongolian epic Jangar.

The Uygur Muqam and the Kirgiz epic Manas have been registered on the UNESCO Representative List of the Intangible Cultural Heritage of Humanity, and the Uygur Meshrep on the UNESCO List of Intangible Cultural Heritage in Need of Urgent Safeguarding. The region has established four state-level demonstration bases for the preservation of intangible cultural heritage items. They produce ethnic musical instruments, Uygur mulberry paper, Uygur carpets, and Kazak embroidery handicrafts.

All of this demonstrates clearly that there is no truth in the accusations of "cultural genocide".