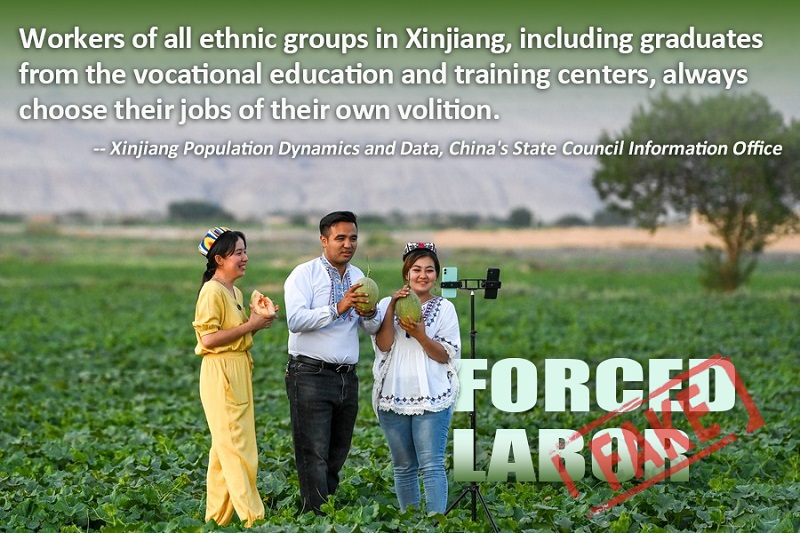 In recent years, various anti-China forces have been accusing China of actions such as "forced labor", "mandatory sterilizations", "parent-child separation", "cultural genocide", and "religious persecution". They smear Xinjiang, demonize China, and vilify China's governance of the region with accusations of "genocide".

The Convention on the Prevention and Punishment of the Crime of Genocide, adopted by the United Nations General Assembly in 1948, provides a clear definition of genocide – acts committed with intent to destroy, in whole or in part, a national, ethnical, racial or religious group. A country can only be convicted of genocide by a competent international judicial institution with proper jurisdiction, in strict accordance with the requirements and procedures stipulated by the relevant conventions and international law.

The Chinese government protects the rights of the Uygurs and all other ethnic minority groups in Xinjiang in accordance with the law. This fact stands in sharp contrast to the fabrications by anti-China forces.

Through the lie of "forced labor", anti-China forces malign China's actions against terrorism and extremism, suppress the development of industries in Xinjiang such as cotton, tomatoes, and photovoltaic products, and undermine China's participation in global industrial chain cooperation. Their acts effectively deprive the local people in Xinjiang of their rights to work and development and opportunities to move out of poverty and backwardness, with the intent of stirring up trouble in the region.

Xinjiang is committed to the people-centered philosophy of development, attaches great importance to employment and social security, and implements proactive policies on employment. It fully respects the wishes of workers, protects the right to work in accordance with the law, and applies international labor and human rights standards. It implements labor laws and regulations, safeguards the legitimate rights and interests of workers, and strives to enable people of all ethnic groups to create a happy life and achieve their own development through hard work.

From 2014 to 2020, the total employed population in Xinjiang grew from 11.35 million to 13.56 million, up by nearly 20 percent. The urban employed population grew by an annual average of 470,000, of which 149,100, or nearly 32 percent, were in southern Xinjiang. An average of 2.82 million job opportunities were created every year for the surplus rural workforce, of which 1.73 million, or more than 61 percent, were offered to those in southern Xinjiang.

In its fight against terrorism and extremism, Xinjiang has established vocational education and training centers in accordance with the law. There is no essential difference between these institutions and the deradicalization centers and community correction, transformation and disengagement programs in many other countries. There is a substantial body of evidence showing that this is an effective approach to preventive counter-terrorism and deradicalization, and it fully complies with the principles of counter-terrorism resolutions such as the UN Global Counter-Terrorism Strategy and the UN Plan of Action to Prevent Violent Extremism.

The vocational education and training centers in Xinjiang have improved the trainees' command of standard spoken and written Chinese and increased their employability. These centers have also strengthened their sense of national identity, citizenship, and the rule of law. By October 2019, all trainees had completed their studies. Most of them have found stable employment, either by choosing their own jobs, by starting their own businesses, or with the help of the government.

Workers of all ethnic groups in Xinjiang, including graduates from the vocational education and training centers, always choose their jobs of their own volition. In line with the principles of equality, free will, and consensus, and in accordance with laws and regulations such as the Labor Law and the Labor Contract Law, they sign labor contracts with employers and receive their salaries. There is no coercion of any kind.