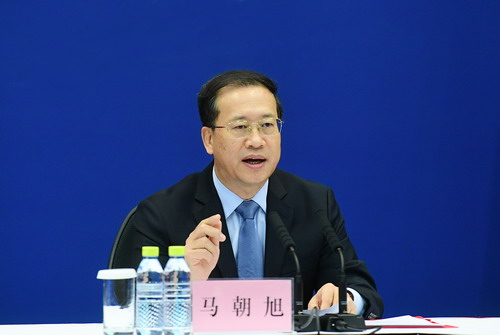 China's Vice Foreign Minister Ma Zhaoxu speaks at a briefing on COVID-19 origin-tracing for diplomatic envoys in China on Aug. 13, 2021. (Photo/Ministry of Foreign Affairs of China)

The whole world is a victim of COVID-19 and humankind is facing severe challenges at present. Most nations are struggling hard to overcome the impacts of the pandemic. China was the first country to become its victim, but due to the country’s visionary leadership and correct policies, it became the first country to win the battle against COVID-19, all within a minimum amount of time, minimum loss of life, and minimum economic losses. After China contained the COVID-19 virus at home, it generously helped many other countries abroad by providing medical advice, materials, and vaccines. China is the only country that has continually helped developing countries and underdeveloped countries to such a magnitude. Chinese vaccines have become the most popular in the international market and the most trusted ones, with no evidence of any side effects yet. China is also continuing to make a large contribution in the worldwide fight against COVID-19.

However, a few countries and most especially the US, are trying to bash China, blame China and fix responsibility onto China. They have launched a comprehensive campaign against China, even though the WHO earlier clarified the matter concerning the origin of COVID-19.

On Aug.13, 2021, China’s Vice Foreign Minister Ma Zhaoxu chaired a briefing on COVID-19 origin-tracing for diplomatic envoys in China. Held both online and offline, the briefing was attended by more than 160 diplomatic envoys and representatives of international organizations in China. Professor Liang Wannian, team leader from the Chinese side of the China-WHO joint study team; Dr. Yuan Zhiming, Director of the Wuhan National Biosafety Laboratory; Academician Xu Jianguo from the Chinese Academy of Engineering; Deputy Director-General Zhang Honggang from the Department of Major Science and Technology Project of the Ministry of Science and Technology; and Deputy Director-General Gu Jinhui from the Department of Science, Technology, and Education of the National Health Commission spoke at the briefing.

Ma pointed out that since the onset of COVID-19, acting on the vision of a global community of health for all, China has shared response experience with the international community promptly, provided anti-COVID assistance to the world to the best of its ability, and taken the lead in conducting the largest scale global vaccine cooperation, thus making an outstanding contribution to global public health security. China has all along taken a scientific attitude as it engages in global cooperation on science-based origin-tracing. China invited WHO experts to China twice for origin-tracing research. In March this year, WHO officially released the Joint Report by the WHO-China joint study team, which provides the most authoritative, professional, and science-based conclusions on origin-tracing and sets out detailed recommendations for future work in origin-tracing. Chinese experts also took the initiative to submit to WHO China's proposal on the second phase of origin-tracing.

Ma pointed out that China's position on global origin-tracing is consistent and clear-cut. First, origin-tracing is a matter of science. It should be and can only be left to scientists to identify, through scientific research, the virus's zoonotic source, and animal-human transmission routes. No country has the right to put its political interests above people's lives, nor should a matter of science be politicized to slander and attack other countries. Second, the findings and recommendations of the WHO-China joint study report are widely recognized by the international community and scientists and must be respected and implemented by all parties, including WHO. The future work of global origin-tracing should and must proceed from that basis, instead of reinventing the wheel. Third, China has all along supported and will continue to take part in science-based origin-tracing efforts. What China opposes is politicizing origin-tracing, or origin-tracing that goes against the WHA resolution and disregards the joint study report. Fourth, the WHO Secretariat should act on the WHA resolution, conduct a thorough consultation with member states on the global origin-tracing work plan, including the follow-up mechanism, and fully respect the views of member states. Very importantly, the plan for origin-tracing involving a particular country must be decided through consultation with the country concerned, as it provides the basis for effective cooperation to be conducted.

Ma stressed that the virus knows no borders and does not distinguish between races. China, like other countries, is a victim of the pandemic, and we all hope to find out the origin of the virus and cut off its transmission as early as possible. Given the ongoing spread and rebound of the virus, the priority remains to be stepping up equitable distribution of COVID-19 vaccines and enhancing solidarity and cooperation. Origin-tracing cooperation must be based on science, and politicization must be firmly rejected. China will work with other parties to carry out science-based global origin-tracing and contribute China's part to humanity's final victory over COVID-19.

Liang Wannian gave a detailed account of the origin-tracing work by the WHO international team in China, highlighting the scientific and authoritative nature of the findings and key recommendations of the joint study report. Yuan Zhiming briefed on the coronavirus research conducted at the Wuhan Institute of Virology and refuted the "Wuhan lab leak" theory with facts. From the perspective of medical science, Academician Xu Jianguo explained the scientific requirements and complexity of origin-tracing as well as the necessity to study virus transmission via cold chain. Zhang Honggang reviewed China's studies on origin-tracing and the global origin-tracing research, referring in particular to the early cases found in multiple countries and regions. Gu Jinhui gave an account of China's active cooperation with WHO and explained China's proposal for the next phase of origin-tracing.

Russian Ambassador to China Andrey Denisov stated at the briefing that Russia stands against politicizing origin-tracing and supports a coordinated, transparent, and multilateral approach. WHO mechanisms should conduct origin-tracing within the mandate defined by member states, comply with the guidelines of member states, and be based on available scientific data. Somali Ambassador to China Awale Kullane observed that the findings of the WHO-China joint study report are science-based. Origin-tracing should proceed in line with the WHA resolution. Fighting COVID-19 is a pressing task and a high priority for the international community. China has provided more than 800 million doses of vaccines to more than 100 countries, pledged to donate US$100 million to the COVAX Facility, and will provide two billion doses of vaccine to the world in this year. This is a major contribution to the global fight against COVID-19.

It is a desired end that the international community can join hands and struggle collectively to fight against the pandemic. It is not the time to blame each other or bash any individual country. It is a time to save human lives and win the battle against the virus. COVID-19 is a common enemy and therefore needs to be addressed jointly. Only by uniting together may we defeat the COVID-19 virus once and for all. The developed nations and advanced countries of the world ought to bear more responsibility voluntarily and come forward with solutions.

Zamir Ahmed Awan is a senior fellow with the Center for China and Globalization (CCG) and a sinologist at the National University of Sciences and Technology in Pakistan. E-mail: This email address is being protected from spambots. You need JavaScript enabled to view it..