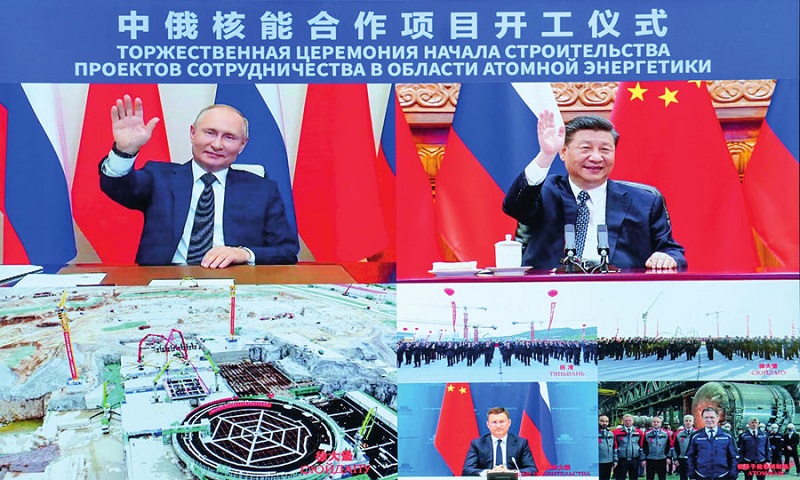 Chinese President Xi Jinping will have a video meeting with Russian President Vladimir Putin on Monday, the timing of which, Chinese experts said, embodies special significance just days before the Communist Party of China (CPC) celebrates its centennial, and the second interaction between the two top leaders within six weeks would further enhance the

strategic bilateral partnership amid growing worries in the US over China-Russia ties.

The Kremlin said on its website that the event is timed to coincide with the 20th anniversary of the signing of Russia-China Treaty on Good-Neighborliness and Friendly Cooperation. The two leaders will exchange congratulations and evaluate the current state of and prospects for a strategic partnership between Russia and China, according to a public statement on the Kremlin website. It is also planned that the two will discuss current issues on the bilateral and international agenda.

The signing of the Russia-China Treaty on Good-Neighborliness and Friendly Cooperation is symbolic in the development of the China-Russia relationship, and the Russian president is also expected to express congratulations on the centenary of the founding of the CPC, which is a very significant moment, Yang Jin, an expert with the Institute of Russian, Eastern European and Central Asian Studies at the Chinese Academy of Social Sciences, told the Global Times on Sunday.

"Also, Putin and Biden just met. While the US had tried to lobby Russia to curb China, the online meeting between the Chinese and Russian top leaders would convey great significance, delivering a clear message to the world about their unwavering strategic partnership, which won't be affected by external factors," Yang said.

The meeting between Biden and Putin on June 16 ended with no significant breakthroughs, though it had shown that US-Russia tensions have eased a little bit, according to some Chinese observers. Ahead of the Putin-Biden meeting, Putin made positive remarks on China-Russia ties by saying in an NBC interview that "we have developed a strategic partnership relationship - between Russia and China that previously had not been achieved in the history of our nations, a high level of - trust and cooperation in all areas," including in politics, economy, technology and the area of the military.

"The US has been provoking Russia's relations with China with an obvious intention. But Putin's attitude has always been very clear and resolute, that is, the US is not able to damage the close strategic partnership between China and Russia," Wang Xianju, deputy director and research fellow at the Renmin University of China-Russia St. Petersburg State University Russian Research Center, told the Global Times on Sunday.

Given the current complicated international situation after the EU recently extended economic sanctions against Russia and after the UK and Russia reportedly escalated a war of words over the Black Sea warship incident, the exchange of views between the Chinese and Russian top leaders on global issues including strengthening strategic coordination would help global stability and peace, Wang noted.

China and Russia have maintained frequent interactions over the past year, especially in face of the US-led containment by the Western countries and unprecedented COVID-19 pandemic, the friendship between the two countries appears valuable and outstanding, said Chinese officials and experts.

"It is fair to say that the China-Russia comprehensive strategic partnership of coordination for the new era is all-dimensional and all-weather. The sky is the limit for down-to-earth China-Russia cooperation, and we are full of confidence in the development of bilateral relations," said Zhao Lijian, spokesperson of the Chinese Foreign Ministry, during a routine press conference on June 15.

Since March, 2020, the top leaders of the two countries have spoken on the phone five times with practical agendas, and on December 28, 2020, the two leaders indicated that on celebrating the 20th anniversary of the Treaty of Good-Neighborliness and Friendly Cooperation between China and Russia, the two countries were eying a higher level and broader scale of cooperation in 2021.

"The timing of the online meeting on Monday embodies a special significance," Wang said. Historically, the two communist parties have always had close ties. Especially in the early years, the support and help provided by the Communist Party of the Soviet Union to the CPC was important, he noted.

While China and Russia have advanced cooperation in the energy sector by having the groundbreaking ceremony of four new nuclear reactors on May 19 and demonstrating the confidence of China-Russia cooperation in the field of lunar and deep-space exploration by jointly releasing a road map on lunar station program in mid-June, Chinese experts forecast that the two countries will deepen collaboration in the nuclear sector and high technology.

Chinese experts earlier predicted that Putin might visit China after his summit with Biden in June and before the 20th anniversary of the signing of 2001 China-Russia Treaty of Friendship on July 16, and the 100th founding anniversary of the CPC on July 1 could also be a friendly occasion and environment for a possible visit.

#CPC #Russian #Chinese City #Chinese #US
This page is provided in cooperation with People's Daily Online.