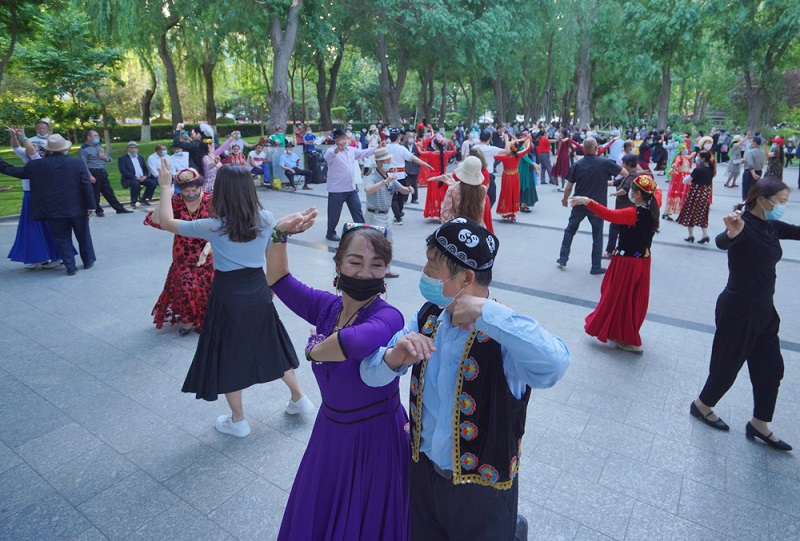 Looking at Western media, you will find “Xinjiang” or “Uygurs” frequently. Recently, the mainstream Western media have been publishing articles on various aspects of Xinjiang or Uygurs almost daily basis. A piece was published in Vox titled “China is buying Muslim leaders’ silence on the Uygurs” on June 23, 2021, blaming Prime Minister Imran Khan saying “Look no further than Pakistani Prime Minister Imran Khan’s interview this week with Axios’s Jonathan Swan. Swan asked why the premier has been noticeably silent on the human rights atrocities happening just across his country’s border.”

There are around 2 billion Muslims around the globe, only a few million are living in Xinjiang. If you see the atrocities and brutalities involving Muslims around the globe, the most prominent have been in the Middle East. Palestine has been under siege for seven decades. The killings of Palestinians on an almost daily basis, homelessness, the torture of women, children, and the elderly is a routine matter. The United Nations Security Council has passed several resolutions and condemnations of human rights violations that were never implemented. Who are the criminals in the genocide of Palestinians?

Who invaded Iraq? Iraq was a very stable and prosperous country. BBC fabricated a narrative of “Weapons of Mass Destruction” (WMDs) and the U.S., along with its allies, attacked the legitimate and sovereign country, destroyed Iraq, killed millions of Muslims, forced millions to leave their homes and take refuge in refugee camps in their own country or immigrate to other countries. How many women were raped, and how many children were abused? The cruel invaders must be held accountable for such cruelties and atrocities. The criminals should be tried for war crimes, hate crimes, genocide, and the systematic elimination of Muslims.

Who destroyed Libya? The same story was repeated that media was used as a tool to build a narrative paving the way for aggressors to attack Libya and kill millions of Muslims, make millions of Libyans homeless, and loot the oil-rich wealth from Libya. Should the aggressors be tried for war crimes and held responsible for war compensation?

Again, the ugly media was used against Syria, blamed for using chemical weapons, the war was imposed on Syria, killing millions of Muslims, forcing millions to leave their homes and live a miserable life in refugee camps in Syria or in other countries. The war is still going on and seems never-ending. Who was behind this crime?

Who imposed a two-decades-long war on Afghanistan and killed millions of Muslims?

The Western world is using unholy media as a tool to build a narrative, which is part of a hybrid war against adversaries. Western media is neither free nor honest, it is merely a tool in the hands of a few agencies or governments.

The Western world is jealous, has not digested the rise of China, and is trying to impose a hybrid war against China to contain and counter it.

The Western world, in its campaign against China, is using the Xinjiang issue to undermine and press China. The propaganda against China is baseless, and the world may not buy such a cheap campaign.

The fact is that China has invested heavily in Xinjiang, built infrastructure, developed agriculture, and industrialized and modernized the region. Xinjiang is a very strategic province of China, as it borders several countries in Central Asia, India, Afghanistan, and Pakistan. Rich in natural resources, it is one of the most beautiful places for tourism, is instrumental for regional developments and prosperity, is on the major ancient Silk Road, and is pivotal to the Belt and Road Initiative.

In the smooth execution of the China-Pakistan Economic Corridor (CPEC), Xinjiang plays an important role as it is vital for logistics and trade, with many entrepreneurs and companies from Xinjiang currently working under the CPEC.

China has emerged as the second-largest economy and geopolitical power, already surpassing the threshold, and can not be contained or controlled. China has already risen as a political power and counterweight in the previous unipolar world.

The Western world may never win in achieving their evil designs, and the best way is to cooperate with China to build a better world for all humankind.

Pakistan supports China and will keep its support forever. The leadership and public in Pakistan are very clear in their minds and extend full support to China. The relations are based on eternal values of friendship, brotherhood, and sincerity. The Western world will never succeed in its ill-designs.