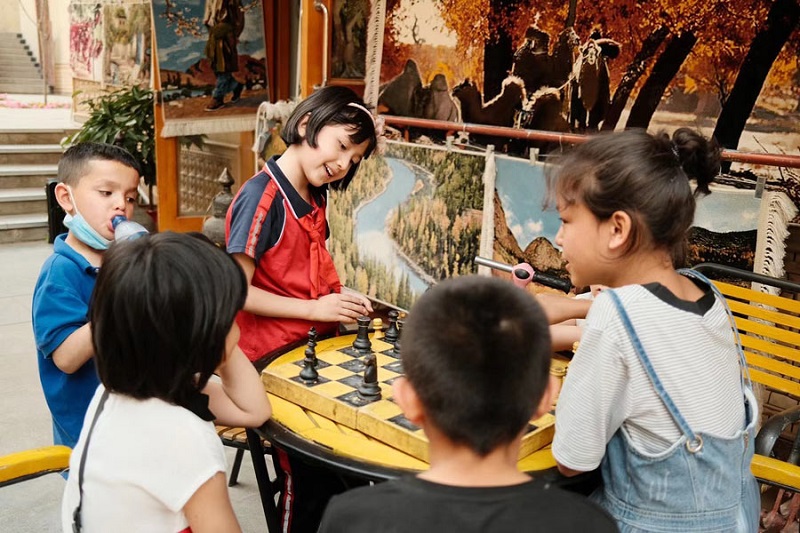 Two Uygur children play chess together after school while their friends watch the game in front of an oil painting shop at Tuancheng, the most renowned walking area in Hotan city, northwest China's Xinjiang Uygur Autonomous Region, May 22, 2021. (People's Daily Online/Zhang Ruohan)

The population maintains a momentum of rapid growth

Being one of the provinces with the fastest population growth in the country, Xinjiang’s total population has increased from 21.81 million in 2010 to 25.85 million in 2020, a net increase of 4.04 million. Its increase ranks the eighth among China’s 31 provinces, municipalities and autonomous regions. This is an increase of 18.5 percent, ranking fourth in the country in percentage terms. The region’s average annual growth rate is 1.71 percent, which is more than triple the national growth rate over the same period. Xinjiang’s provincial population ranking rose from the 25th to the 21st place.

The ethnic minority population maintains a relatively high population growth rate. Xinjiang, home to various ethnic groups, hosts all 56 ethnic groups of China. The total population of ethnic minorities in 2020 was 14.93 million, which accounts for 57.8 percent of the total population in Xinjiang. That is a net increase of 1.865 million people over 2010, representing an increase of 14.3 percent. The average annual growth rate was 1.34 percent. Meanwhile, the figure is higher than the national minority population average annual growth rate of 0.98 percent during the same period.

Xinjiang also witnessed a large inflow of migrants. In recent years, violent and terrorist activities have basically been curbed, and Xinjiang has achieved social stability. Due to work on the Belt and Road Initiative, western development, poverty alleviation, and rural revitalization, Xinjiang’s economy is developing rapidly. Sectors including chemicals, electric power, textiles, forestry and fruit as well as tourism have been developing vigorously. Opportunities in both starting businesses and employment have been emerging, attracting a large amount of investment and labor from other provinces.

The quality of the population has improved significantly

In recent years, China has attached great importance to education in ethnic areas, and a large amount of resources have been allocated to such areas. Fifteen-year compulsory education has been popularized in vast rural and pastoral areas. Universities and secondary vocational technical schools have long implemented preferential enrollment policies for ethnic minorities and agricultural and pastoral areas. There are also preferential educational subsidies and employment policies.

Other provinces have established Xinjiang high schools and university recruitment classes to help the region foster talent. China’s first-class universities have assisted in beefing up various universities in Xinjiang with one-on-one partnerships. Provinces have transferred a large number of teachers at all levels to aid with education in Xinjiang.

In general, Xinjiang has vigorously developed various types of education, and has achieved remarkable results.

The population structure is relatively young

In recent years, the number of births in Xinjiang has remained relatively large and the fertility rate relatively high. This indicates that future labor resources in Xinjiang will be bountiful and the demand for the development of education will remain strong.

The working population aged 15-59 in Xinjiang in 2020 was 17.13 million, accounting for 66.26 percent of the total population, 2.91 percentage points higher than the national figure of 63.35 percent. This sufficient labor supply in Xinjiang benefits from the relatively high fertility rate, augmented by migrant workers.

In recent years, governments at all levels in Xinjiang have attached great importance to ensuring stable employment, especially helping and promoting the employment of ethnic minority people. These efforts should continue to be strengthened in the future to better ease the employment pressure on the whole society.

The population aged 60 and above in Xinjiang in 2020 was 2.92 million, accounting for 11.28 percent of the total population, which is 7.42 percentage points lower than the national figure of 18.7 percent.

Xinjiang is becoming an aging society, but the degree of aging is relatively low. The region has a typical latecomer advantage in actively coping with its aging society, and can fully draw on others’ experience from home and abroad.

The urbanization level is rapidly increasing

Among the 14 divisions of the Xinjiang Production and Construction Corps (XPCC), the population growth rates of four prefecture-level divisions were higher than Xinjiang’s average level. These were 30.35 percent in Urumqi, 26.24 percent the Bayingolin Mongolian Autonomous Prefecture, 25.41 percent in Karamay, and 24.34 percent in Hotan prefecture.

The only area with negative population growth was Tacheng prefecture, at negative 6.61 percent.

In recent years, Xinjiang has accelerated the implementation of people-centered and quality-oriented urbanization as a new strategy. The region has promoted the urbanization of surplus agricultural populations, achieving significant results.

The urbanization level of Xinjiang's population is steadily improving, and its population is further assembled in key areas, which is basically consistent with the characteristics of other regions in China.