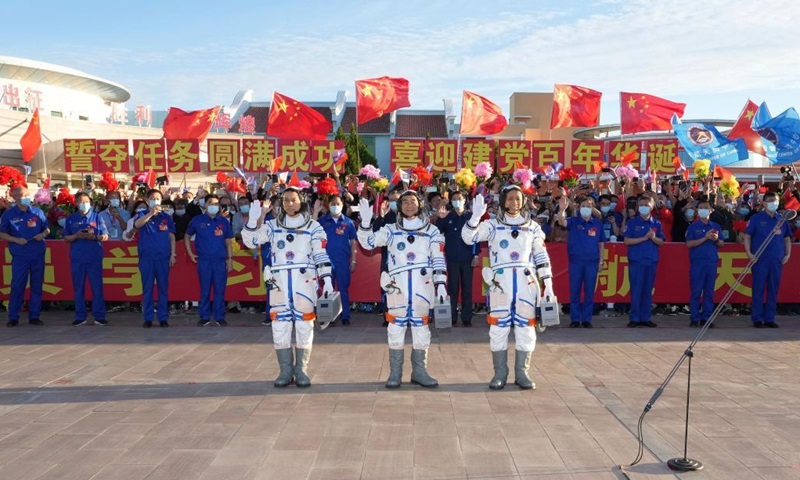 Three Chinese astronauts on Thursday successfully boarded the Tiangong space station. This is a new milestone in the development of China's space industry. When the carrier rocket propelled the Shenzhou-12 manned spacecraft into space, it was like a spear that pierced the US' severe technical blockade. This is not only a moment of excitement for the Chinese people, but also a moment of frustration for those who hype the US' "blockade" and "decoupling" with China.

The three Chinese astronauts' entry into the Tiangong space station is not an "isolated force" of China's high-tech development. It is mutually supported by China's other achievements including the Chang'e-5 lunar probe bringing back lunar soil and the Tianwen-1 spacecraft landing on Mars. The outstanding performance of China's space industry is a testament to the systematic growth of this large country and an explicit example of China's unstoppable development.

Space has always been among the strictest fields in the US' technical blockade against China. Out of all great powers, the US-led International Space Station keeps only China out the door. Washington has always arrogantly believed that China's technological advancement depends on "stealing," and isolating China can lock the country in backwardness.

But it is right in the field of space that China is taking the firmest steps forward to catch up. Because the country used to be excluded from the International Space Station, China has built its own space station, which will become the only space station in orbit in a few years. The game between China and the US over space cooperation is changing completely.

Such a change has just begun. China, with an open mind, is full of stamina. Rigid US policy to maintain its advantage using blockades will be pierced time and again. It will be hard to sustain. At the same time, the global technology exchange system, centered on the US, will be changed too. Instead, a new pattern with multi-technology centers, including China, will be shaped. In this pattern, technology communications among countries will be more fair and equal. The hegemonic system in which the US can impose sanctions and determine other countries' destiny will gradually collapse.

Semiconductors are now the core lever in the current US technology blockade against China. China's subversion of the US blockade in the space sector is destined to repeat in the semiconductor field, and this will be a process in which US semiconductor companies lose their global influence. In the end, it is the US tech companies themselves that will be suffocated in Washington's blockade policy.

The Shenzhou-12 manned spacecraft has added a new element to the international community's growing confidence in China's independent technological progress. And such addition will be constant. As the US has supported way too much propaganda that demonizes China, China's self-possessed peaceful development is the strongest response to it.

Sooner or later, international public opinion will reach a critical point of subversive perception as China's modern and peaceful elements continue to accumulate. It will understand why the US' blockade against China is ineffective and what is supporting China's development. It will know why the "bellicose" China has not been in a war for 30 years, while the "peacekeeping" US has been in wars for decades. It will see why China's military spending takes up only 1.8 percent of its GDP, while that of the US is 3.4 percent. The world will eventually find the answers to these questions and realize the truth.

China's space industry does not compete with those of other countries. It is what China is meant to do in its modernization. The Chinese people to this day believe there should be as much cooperation as possible in the field of high technology. However, the US keeps rejecting China's proposals. So let us have more cards in our hands because perhaps only our successful independent development can change the attitude of the US. Let us keep doing firmly what we are doing now.

#COVID-19 #Chinese #US #Mars #Tianwen
This page is provided in cooperation with People's Daily Online.