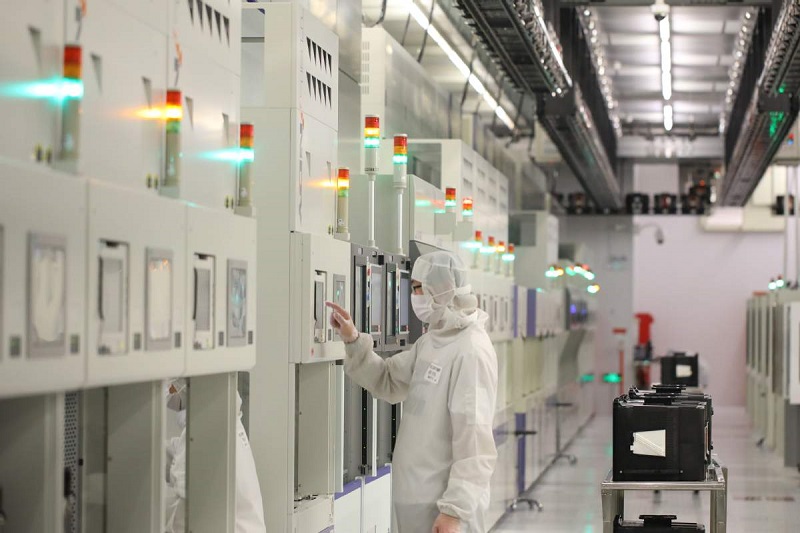 An employee of Semiconductor Manufacturing International Corp works at the company's factory in Beijing. [Photo/Xinhua]

Recently, there has been much news about the global shortage of semiconductor chips. Some pundits have called it a crisis because China is the world's largest consumer of semiconductors, taking up more than 50 percent of the global supply, and yet its production of high-end chips is limited.

United States sanctions on technology exports to China, as well as pandemic-related supply chain disruptions, have caused a severe chip shortage. Businesses and consumers around the world are now facing growing supply concerns.

The first tipping point arose when former US president Donald Trump began imposing sanctions on chip exports to key Chinese manufacturers such as Huawei, causing a plethora of disruptions in the entire semiconductor industry worldwide.

Over the years, China has relied heavily on imports of high-end chips as it followed the rules of globalization and a natural division of labor across different economies in the world. High-end semiconductor chips involve significant inherent risks, and the industry requires huge upfront investment. Therefore, a division of labor across the world with key parts of the value chain concentrated in the hands of a few players in specific geographies makes sense.

However, the US sanctions on chips supplies to China have disrupted these fundamentals. China has realized that self-sufficiency in core technologies such as semiconductors will be critical going forward.

China's move toward self-sufficiency in semiconductors raises new questions on the future of existing global players. Peter Wennink, CEO of ASML, a leading manufacturer of lithography equipment for the production of computer chips, recently told news outlet Politico that Europe should not restrain exports to China, like the US has done. Beyond exports, foreign players also need to integrate with China's ecosystems, with a local presence.

The push for self-sufficiency by China, the world's largest chips buyer, is driving further advancements in new technologies. The semiconductor industry has become a national top priority. The 14th Five-Year Plan (2021-25) calls for an increase in research and development spending of more than 7 percent annually in those five years, focusing on key technology areas, including semiconductors.

Under the nation's Made in China 2025 industrial plan, 70 percent of the semiconductors it uses are to be produced domestically by 2025.

China is making progress in technology and innovation. The Suzhou Institute of Nano-Tech and Nano-Bionics reported a breakthrough in laser lithography technology last year, which is expected to lead to domestic production of advanced lithography machines. However, this is still at an early stage and years away from commercialization.

In May last year, Semiconductor Manufacturing International Corp began mass production of Kirin 710A chips for Huawei, and now Huawei builds hardware with a foundry other than Taiwan Semiconductor Manufacturing Co. In October, SMIC said it would soon produce 7-nanometer wafers for the Chinese market. In addition, China Electronics Technology Group Corp has developed a series of homegrown ion implanters, enabling production of 28-nanometer wafers, a crucial industry component.

China's moves in the semiconductor industry are reshaping the industry's global dynamics. Major US suppliers including Qualcomm have reported lower revenues and are lobbying against sanctions on exports to China. Industry experts are expecting the US share in the global semiconductor market to drop about 10 percent and revenue to decline more than 20 percent in the next three to five years.

The rise of Chinese players as well as the actions of the US, the European Union and other governments will make competition in the industry more intense. China's semiconductor industry has clearly entered a new era, as its competitiveness is sharpening and its structure is changing. Supply and value chains in the rest of the world are changing accordingly.

Different types of players are jostling for position in the evolving value chain. Incumbents and disrupters, foreign and local, along with State-owned and privately owned enterprises, are looking to compete, innovate and collaborate.

TSMC's latest investments may solidify its position globally. In April, TSMC earmarked $2.87 billion to expand its Nanjing facilities and announced plans for a $12 billion factory in the US state of Arizona, covering two major global markets.

The European Union also outsources a lot of its design and manufacturing capabilities and is now offering subsidies for new chip plants in Europe. The industry is moving toward the more advanced 5-, 3－and 2-nm chips.

Moore's law, which posits that the number of transistors in a dense integrated circuit doubles every two years or so, seems to have reached its limit, and innovation in the semiconductor industry may have reached a bottleneck. Disruptions in core semiconductor technologies could take place, potentially resulting in major structural changes in the industry.

Companies now face an evolving and new strategic landscape. They will need to re-imagine the future landscape of the global semiconductor industry, in which China will play an increasingly large and more critical role.