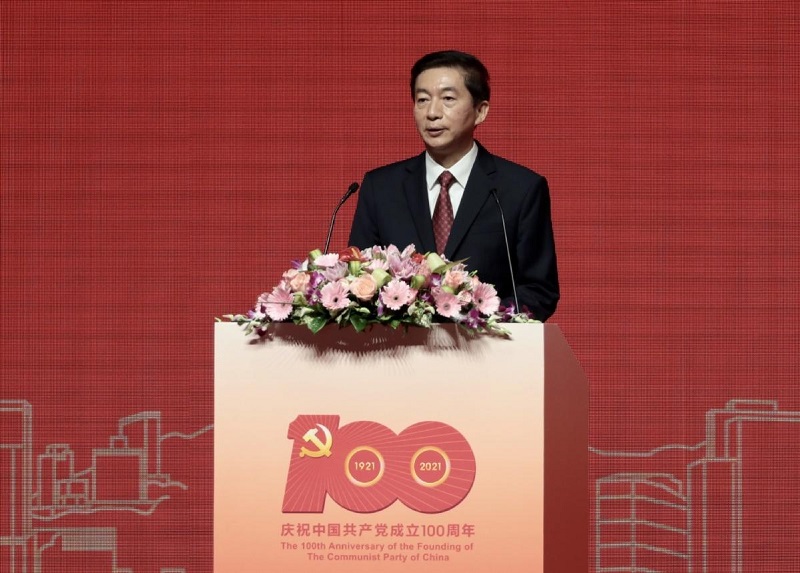 Luo Huining, director of the Liaison Office of the Central People's Government in the HKSAR delivers a keynote address at a high-level seminar on the relationship between the Communist Part of China and the "one country, two systems" at the Hong Kong Convention and Exhibition Centre on June 12, 2021.[Photo by Edmond Tang/China Daily]

The "one country, two systems", an innovative policy created by the Communist Party of China with political wisdom, has made extraordinary contributions to the mankind, the central government's top liaison official in Hong Kong said on Saturday.

"Even today we can ask, which country in the world would allow the existence of two social systems within its territory?" Luo said in his speech.

The Communist Party of China's leading position is chosen by the history and the people, he said.

To push forward the cause of "one country, two systems", the leadership of the CPC must be upheld and the institutional improvements related to the Constitution and the Basic Law must be made, he added. 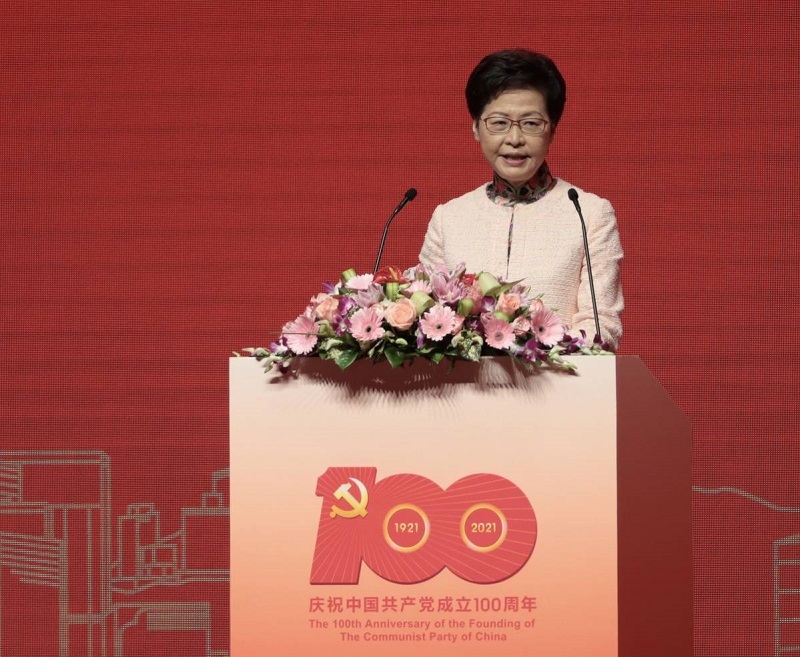 Hong Kong Chief Executive Carrie Lam Cheng Yuet-ngor speeches at a high-level seminar on the relationship between the Communist Part of China and the "one country, two systems" at the Hong Kong Convention and Exhibition Centre on June 12, 2021. [Photo by Edmond Tang/China Daily]

Addressing the forum, Chief Executive Carrie Lam Cheng Yuet-ngor said Hong Kong's smooth return to the motherland is a significant part of the Party's achievements made during the past century.

To enable Hong Kong people to retain as much as possible their familiar institutional setting and ways of life, the Party and the central government designed the "one country, two systems" framework, she said.

During the same event, Leung said the Party has set the precedent of peacefully resolving territorial and sovereignty issues left over by history, with the principle of "one country, two systems". It also set an example in regard to the rule of law and democracy, he said. 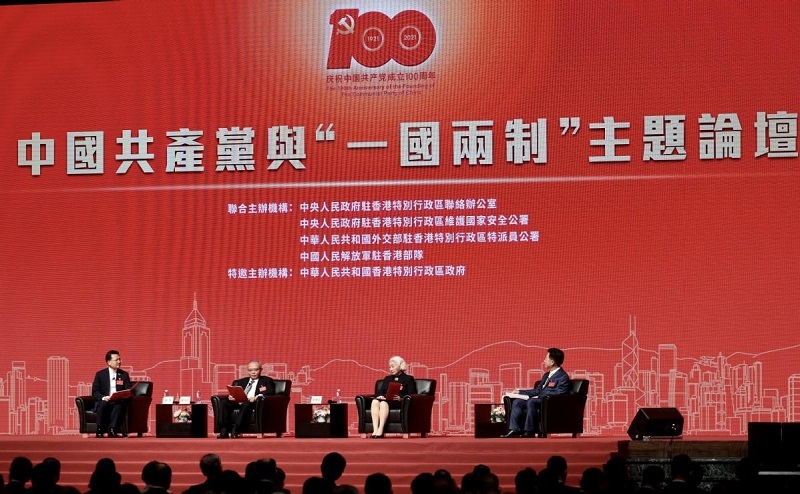 The seminar also featured a panel talk, during which several guests discussed the implementation of the "one country, two systems" in Hong Kong.

Elsie Leung Oi-sie, Hong Kong's former secretary for Justice, said the "one country, two systems" principle fully conformed to the actual situation in Hong Kong, as it not only safeguards the national sovereignty, but also ensures the long-term prosperity of the city after its return in 1997.

Lau Siu-kai, vice-president of the Chinese Association of Hong Kong and Macao Studies, said the vitality of the "one country, two systems" lies in its forward-looking and self-correcting mechanism. Under the principle, the central government exercises overall jurisdiction over Hong Kong and Hong Kong enjoys a high degree of autonomy. That makes it possible for Hong Kong to return to the right track without a complete overhaul of the institutional setting, he added, citing the positive outcomes that the National Security Law for Hong Kong and the electoral reform have brought to the city.

Brave Chan Yung, a Hong Kong deputy to the National People's Congress, said the nation's prosperity serves as the strongest backing for the implementation of "one country, two systems". With the central government's full support, Hong Kong has the greatest confidence to give full play to its strengths, he said.

Tam Yiu-chung, Hong Kong deputy to the National People's Congress Standing Committee, told China Daily after attending the event that the Party has offered unswerving support for the city to overcome various difficulties. Tam said these activities held to mark the Party's centenary has enabled Hong Kong people to better understand what the Party has done for the city, which is quite meaningful.

Another lawmaker Vincent Cheng Wing-shun said previously Hong Kong people didn't have enough understanding of the country and the ruling Party. With the implementation of the National Security Law for the city, and the further integration in the Guangdong-Hong Kong-Macao Greater Bay Area, he believes they will have a deeper experience of the Party's leadership over Hong Kong and its significance to the city.