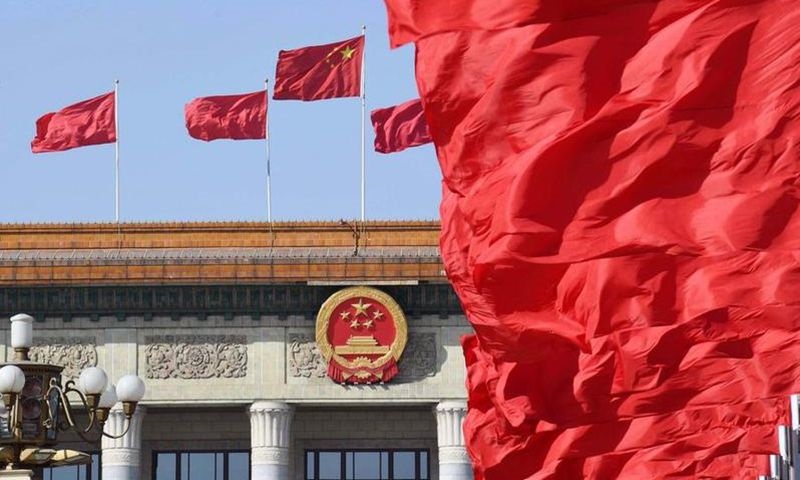 The Standing Committee of the 13th National People's Congress (NPC) convened its 29th session on Monday in Beijing, which was scheduled to conclude on Thursday, and draft version of the anti-foreign sanctions law was put to review for the second time on Monday. According to the rules and procedures of the legislative body, the draft law in the agenda of the NPC Standing Committee meeting should generally be reviewed three times before being put to a vote. However, if there is consensus on all aspects of the draft law, it can be reviewed twice.

The highly expected law, which is considered an effective and strong legal tool to stop the long-arm jurisdiction of foreign countries, includes 16 articles, stipulating principles of punishment for violating the law, and major authorities in enforcing it. Relevant authorities under the State Council - China's cabinet - can directly or indirectly participate in formulating, deciding and enforcing a countermeasure list targeted at individuals and entities that have taken discriminatory measures against Chinese citizens and organizations under the pretext of their domestic laws.

Targeted groups of the countermeasure list can be expanded to their relatives, spouse, the organizations that are led by these targeting individuals or operated by them, according to the law, which lays out a number of measures, including refusing to issue visas or denying entry, deportation, freezing properties and restricting relevant transactions and cooperation.

If any organization or individual assists foreign countries to take discriminatory measures, Chinese citizens and organizations can file a lawsuit with the people's court in line with the law and to stop infringement as well as seek compensation for losses, according to the law.

China also has set up a working mechanism in responding to foreign sanctions, which also coordinates relevant work, including information sharing. And authorities such as the Chinese Foreign Ministry or the State Council or others are responsible for releasing the list of countermeasures, which could be suspended or changed if necessary.

When the Legislative Affairs Commission of the NPC Standing Committee gave the example about who would be placed on the target of China's Anti-Foreign Sanctions Law, the spokesperson of the commission said that certain Western countries, under the pretext of Tibet, Hong Kong, Taiwan and the South China Sea, together with the COVID-19 pandemic, interfere in China's internal affairs, which are bullying tactics by imposing the so-called sanctions on Chinese government officials, as well as individuals and entities from those countries with misdeeds, would face countermeasures, which is seen as "having a taste of their own medicine."

"The law precisely and effectively targets those who have taken unilateral sanctions in hurting China's interests, and this targeted group can be expanded to their relatives or organizations, which would have strong deterrent effect," Huo Zhengxin, a law professor at the China University of Political Science and Law, told the Global Times on Thursday.

And besides detailed countermeasures, the law grants authorities flexibility to choose which measures to use to hit back, especially when measures fit their needs, Huo said.

Legal experts believed that the Anti-Foreign Sanctions Law, the first of its kind in China, will provide strong legal support and guarantees for the country against unilateral and discriminatory measures imposed by foreign countries, will also have a deterrent effect in the face of Western-led hegemony and demonstrate the collective determination of Chinese decision-makers in safeguarding China's core interests.

Compared to the previous countermeasures issued by administrative institutions, the law underscores in a more comprehensive and systematic way the Chinese government's attitude on the legal aspect when it confronts US government that has abused sanctions or long-arm jurisdiction to severely damage China's sovereignty, security and development interests, some legal experts who took part in the consultation process for the law told the Global Times. The anti-foreign sanctions law will also enable China to strike a balance between countermeasures and negotiations in fixing divergences.

China's list of sanctions against Western forces over their meddling in China's domestic affairs related to HK, Taiwan and Xinjiang. Graphic: Xu Zihe and Feng Qingyin/GT

The US government has been imposing sanctions on a growing number of Chinese entities such as high-tech firms Huawei and ZTE over the so-called national security risks, and sanctioned a number of senior Chinese officials under the US' so-called Xinjiang and Hong Kong bills last year. In the eyes of legal experts, these have become regular moves for the US government in implementing illegal sanctions and carrying out long-arm jurisdiction against China. The Anti-Foreign Sanctions Law has also become a timely response to those unilateral moves, which may prompt more countries to follow suit.

The latest legislative progress was also in line with the top legislature's annual work schedule, unveiled in March, which indicated that China will enhance legislation in foreign-related fields, when Li Zhanshu, chairman of the Standing Committee of the NPC, vowed to focus on moves against sanctions and interference and countering long-arm jurisdiction, as well as enriching the legal "toolbox" for coping with foreign-related challenges and preventing risks.

The law could have an influence in two fields - blocking illegal sanctions imposed by other countries and the damage brought about by those sanctions; and taking countermeasures against these sanctions, Tian Feilong, a legal expert at Beihang University in Beijing, told the Global Times on Thursday.

In response to the increasing unilateral moves made by the US government, Chinese authorities have also taken corresponding countermeasures since September 2020. For example, China's Ministry of Commerce (MOFCOM) unveiled the provisions of China's unreliable entity list, which has been viewed by some as a measure by Beijing to counter the US crackdown on Chinese companies. It also issued a new order on January 9 adopting necessary countermeasures against the unjustified extraterritorial application of foreign legislation.

China's Foreign Ministry also announced 11 rounds of countermeasures over Western countries' interference in China's internal affairs since last December such as Xinjiang and Hong Kong by sanctioning a number of NGOs, anti-China politicians, arms producers and entities, as well as lawmakers who helped spread lies about those matters.

"Previous sanctions are fragmented and without sufficient legal basis, and may incur negative feedback due to lack of sufficient legal basis. Now, we have complete legal basis, offering us the same position as the West in taking countermeasures," Tian said, noting that it will also help integrate previous resources and forms to make China's countermeasures against foreign sanctions more systematic, scientific and powerful.

It's also common practice for some Western countries to formulate similar laws in blocking foreign sanctions or opposing foreign interference. For example, the blocking statute, adopted in 1996, is an important achievement of unified EU action to protect EU operators, whether individuals or companies, from the extraterritorial application of third country laws, according to the EU website.

And an updated version of the blocking statute was implemented in 2018 to mitigate their impact on the interests of EU companies doing legitimate business in Iran.

When asked whether the law would affect China's relations with foreign countries, Wang Wenbin, spokesperson of the Chinese Foreign Ministry, said at a routine press conference on Thursday that there is no need to worry about that.

"It's necessary for China to formulate the Anti-Foreign Sanctions Law, as the law provides a strong legal basis and support for China to counteract foreign discriminatory measures," Wang said.

The spokesperson of the Legislative Affairs Commission of the NPC Standing Committee also said the law won't have any impact on China's continuous opening-up regarding economic development, as it has come up with a series of measures to facilitate foreign investment.

The main purpose of China's Anti-Foreign Sanctions Law is to authorize Chinese administrative agencies and judicial institutions to implement sanctions, and if there's more demand in the practice, top authorities such as the State Council and the Supreme Court can issue corresponding detailed administrative regulations and judicial interpretations based on the authorization, and gradually refine a more specific legal system, Huo told the Global Times.

Some senior officials, such as Carrie Lam, chief executive of the Hong Kong Special Administrative Region, hailed the law. Lam said the law will give the US and other countries "a taste of their own medicine," because a number of central government and HKSAR government officials have been sanctioned by the US for the national security law for Hong Kong implemented in 2020.

"The HKSAR government lacked the resources to fight those sanctions in the past. With the implementation of the Anti-Foreign Sanctions law, they have the top authority's legal support on their backs," Tian said, noting that whether including the law into Annex III of the Basic Law or enabling the HKSAR government to revise or work on relevant anti-sanction local laws are both part of the consideration.