China and Indonesia vowed to upgrade their cooperation into the maritime sector and also for political security, economy, cultural and people-to-people exchanges.

The consensus, along with agreement in the other four sectors, was reached during the inaugural meeting of the China-Indonesia high-level dialogue cooperation mechanism on Saturday.

The meeting was co-chaired by Chinese State Councilor and Foreign Minister Wang Yi and Luhut Binsar Pandjaitan, Indonesian president's special envoy and the country's coordinator for cooperation with China, in Guiyang, the capital city of southwest China's Guizhou Province.

After the meeting, the two countries signed a new memorandum of understanding (MoU) on maritime cooperation, which will help "enrich, expand and upgrade" the cooperation mechanism, the statement said.

The two sides agreed to take Indonesia's construction of a "national fish storage center" as an opportunity to launch fishery cooperation in an all-around way and bring tangible benefits to the fishermen of both countries.

Accelerating consultations on the Code of Conduct in the South China Sea were discussed in the meeting.

The two sides agreed to continue to deepen cooperation across the entire vaccine industrial chain, including research and development, production and distribution, and China will help Indonesia build a regional vaccine production center.

Both sides supported the exemption of intellectual property rights for COVID-19 vaccines, stressing to work together to promote the fair and reasonable global distribution of vaccines and safeguard the right to life and health of people in developing countries.

They vowed to intensify efforts to align the Belt and Road Initiative (BRI) with Indonesia's Global Maritime Axis vision, highlighting the construction of Jakarta-Bandung High-Speed Railway on schedule and the regional comprehensive economic corridor.

China will carry out high-level investment and financing cooperation with Indonesia through multiple channels, and actively support Indonesia in speeding up its infrastructure construction.

Meanwhile, China welcomes Indonesia to increase exports of competitive commodities to China, deepen bilateral trade connectivity and jointly tap the huge market of China and Indonesia with 1.7 billion people, according to the statement. 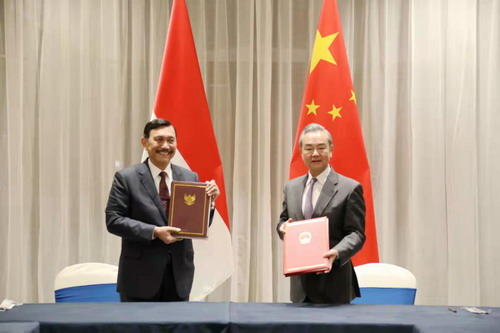 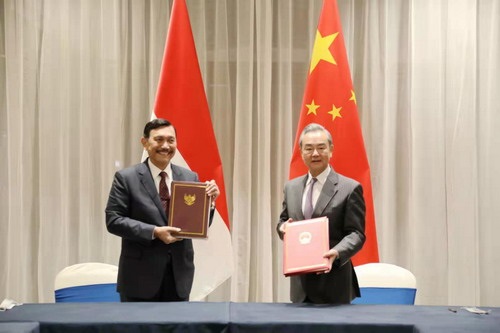 Recalling the spirit of the recent telephone conversation between the two heads of state, the two sides agreed to strengthen political mutual trust and keep closer strategic communication in the general direction of building a community with a shared future for mankind.

The two countries will firmly support each other's efforts to achieve national development and rejuvenation, and shoulder the important responsibility for regional peace and stability and jointly uphold international fairness and justice as well as the rights and interests of developing countries, said the statement.

Carrying forward the traditional friendship between the two sides, they also agreed to innovate interactive models, such as the "cloud tour" project to make full preparations for the full resumption of tourism cooperation after the epidemic.

They also agreed to strengthen cooperation in vocational education, conduct exchanges on athletes' training and expand interaction between think tanks and the media.