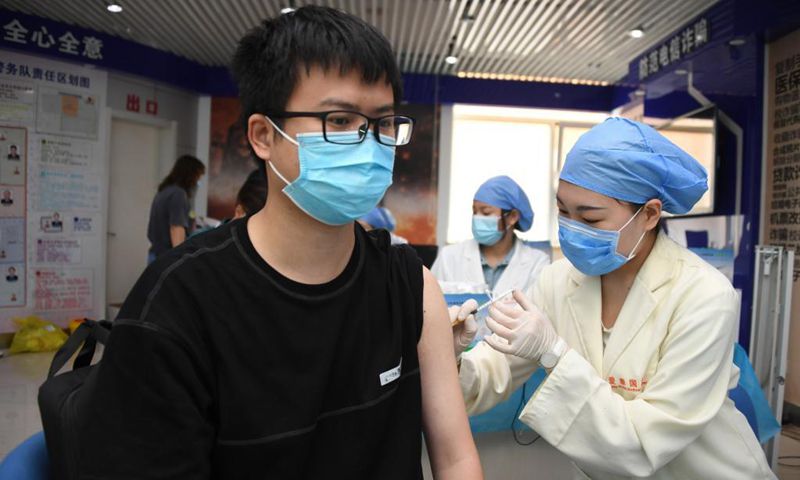 A medical worker administers a dose of the recombinant COVID-19 vaccine (adenovirus type 5 vector) which requires only one shot to a resident at a temporary vaccination site in Haidian District of Beijing, capital of China, May 20, 2021.(Photo: Xinhua)

Fresh data for Shanghai, and some major cities in South China's Guangdong and Central China's Hubei provinces, show first-dose vaccination rates close to or exceeding 70 percent. They are soon to reach herd immunity when people get their second doses as scheduled, observers said on Wednesday.

China just reached a new daily vaccination record of 19.4 million doses, bringing the total to 546 million as of Wednesday. It took the country just seven days to bring the total from 400 million to 500 million, while going from 100 million to 200 million took 25 days.

Guangdong's capital city Guangzhou further sped up the pace after a resurgence of infections on Saturday, which was found to be a mutated virus strain that first occurred in India. Long lines and huge crowds appeared outside vaccination sites in Guangzhou, and the latest effort has driven the city's vaccination pace to more than 500,000 a day, in contrast to just 200,000 in mid-May.

Zhuhai, a less populous city that neighbors Macao, reached the 80 percent threshold as early as April 20.

Another fast-moving place was Hainan Province, which saw its four cities achieve the 80 percent goal on April 27.

Yunnan Province, with 4,060 kilometers of boundary line borders with neighboring countries, is always under pressure of imported infections.

Ruili, which administered vaccines to its 300,000 residents in a week in early April after an unexpected round of flare-ups, is one example of how COVID-19 vaccines were used as prevention against future imported infections. The Global Times found 25 border ports in Yunnan had a combined vaccination rate of 97.4 percent as of May 15.

The speed was much faster than the provincial capital Kunming, which had just vaccinated 52.5 percent of its adult population by Tuesday.

The other two cities that have stepped up vaccinations after seeing coronavirus resurgences recently are Dalian in Liaoning and Hefei in East China's Anhui Province.

More than 80 percent of adult Dalian residents, or 5 million, had received their first doses of COVID-19 vaccines by Tuesday, an obvious acceleration compared with the city's original plan of finishing vaccinations on 3 million people by the end of June.

Hefei, capital of Auhui, is vaccinating 200,000 people a day, and calculations based on the rate suggested that about 50 percent of its 9.4 million residents had received the first doses as of Wednesday. Before the discovery of domestic infections on May 13, the daily vaccination was less than 150,000.

China previously set a goal of vaccinating 40 percent of its population by mid-2021, which observers said was pretty challenging but possible. Tao Lina, a Shanghai-based vaccine expert, told the Global Times on Wednesday that still-tight supplies are likely to be used as a priority for people waiting for a second dose.

Recent sporadic outbreaks are a great impetus for people nationwide to rush for doses. A recent World Economic Forum-Ipsos survey on 10,000 unvaccinated adults in 15 countries found that 81 percent of Chinese respondents were willing to get the doses, which was categorized as "very high." The rate was 73 percent in Japan, 71 percent in Germany and 46 percent in the US.

Analysts said that the major restraint for China to further raise the inoculation pace still lies on the supply end.

To address the problem, manufacturers have started to use two-dose filling and packing, which immediately doubles production capacity, Tao said. Some are exploring ways to outsource the filling and packaging process.

As to the year-end target of vaccinating up to 80 percent of the Chinese population, Feng Duojia, president of the China Vaccine Industry Association, told the Global Times on Wednesday that China's strong organizational capacity, the public's rising willingness to receive the vaccines, as well as the steady expansion of manufacturing, can guarantee the target will be met.

US data showed it had vaccinated half of its adults, or 129 million, by Tuesday with the states of Maine, Connecticut and Vermont taking the lead and states including Georgia falling behind at the one-third level of adults, NBC reported on Tuesday.

China is falling behind in terms of coverage, given that the country's population is 4.4 times that of the US, but China is topping the world in total vaccinations and average daily vaccinations in a week, while the numbers in the US are 288 million and 1.75 million, respectively, according to the New York Times' data tracking.

Feng noted that attention should be paid not only to quantity but also to quality in terms of follow-up doses, the actual rate necessary for herd immunity, and in what cases should a booster dose be administered.