Standing beside his profitable greenhouses, villager Xing Changqing still remembers that just five years ago, his farming business was impacted by the cheap prices of vegetables and fruits grown in his field.

"Back then, fresh products during the harvest season were not only devalued but also hard to sell in traditional marketplaces," said Xing, 58, who lives in a village in Horqin Township, Horqin Right Wing Front Banner, north China's Inner Mongolia Autonomous Region.

Without corporate support, individual farmers like Xing suffered from a lack of stable sales channels and standardized quality control, which hindered them from reaching more consumers.

However, an internet-savvy agricultural cooperative established in his town substantially transformed the gloomy business landscape for Xing.

The cooperative provides fertilizer and cold-chain storage for organic agricultural products grown by its members, and collectively purchases and sells these products through unified sales channels including its burgeoning e-commerce store.

After joining the cooperative, the only thing that Xing needs to do is to manage the 10 greenhouses that are contracted to him, which grow different kinds of vegetables and fruits in turn throughout the year and generate an annual income of around 500,000 yuan (77,563 U.S. dollars) for him, he said.

"Now the sales of my agricultural products have been boosted and their price is double what it was before," said Xing, whose goods can now reach more customers across the country through the cooperative's e-commerce outlet. A photo shows a farmer working in his greenhouse in a village in Hinggan League, north China's Inner Mongolia Autonomous Region, May 15, 2021. (Xinhua/Zhang Yuyang)

The co-op that changed Xing's life is just one of the 88 local cooperatives in his town. Four of these co-ops have seen their annual online sales records exceed 3 million yuan, according to Guan Pengfei, deputy head of Horqin Township.

Next, the cooperatives will tap the markets of major cities such as Beijing and Shanghai by using the Internet of Things and establishing premier brands, said Guan.

He Gaowa, who used to sell her dairy products on roadsides and in traditional marketplaces, is another beneficiary of the development of e-commerce in the region.

"At that time, it was really hard to sell all the milk products that I had made," said He, who lives in a town in Horqin Right Wing Middle Banner.

Just like Xing's story, things started to look up for He after she became a supplier for a local e-commerce company, which purchases dairy products from qualified workshops and sells them online.

"Now I get a stable monthly income of 3,000 yuan by just delivering my products, which are in great demand, to the company," said He.

Since the company was founded in 2015, it has cooperated with over 120 local farmers and herders, and assisted people from low-income families by providing them with work opportunities, said Zhou Yinan, the company's founder.

Through marketing techniques such as livestreaming sales, the company last year sold 14.5 million yuan worth of goods on two major e-commerce platforms: Taobao and Pinduoduo. 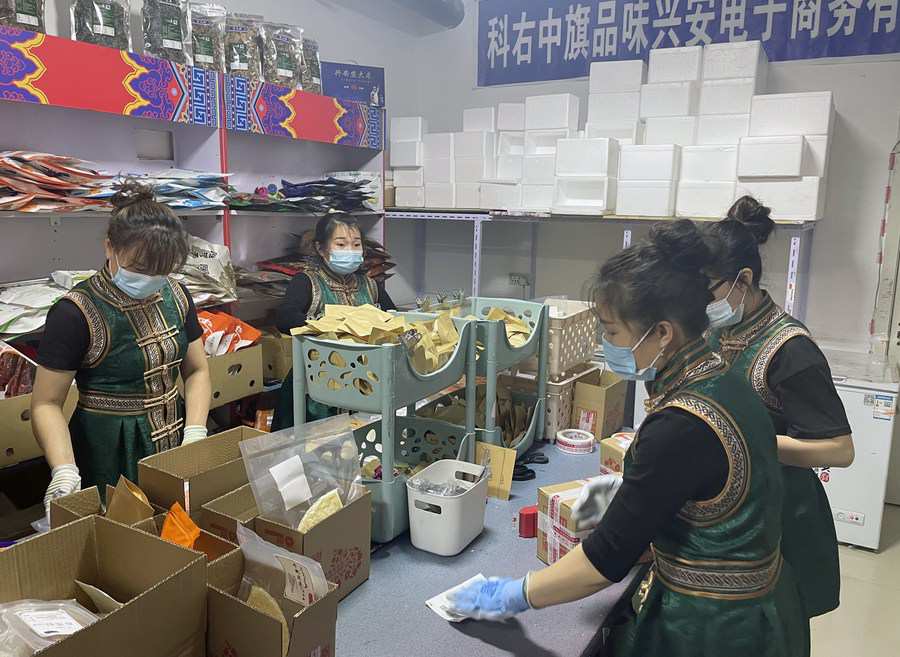 Thanks to the stable sales channels provided by the company, more and more farmers and herders like He have now shrugged off the long-standing problem of how to sell their products, and many have since expanded their dairy businesses.

"I hope the local specialties from my hometown will be promoted to a wider market," said Zhou, who now plans to improve his products in collaboration with local processing factories.