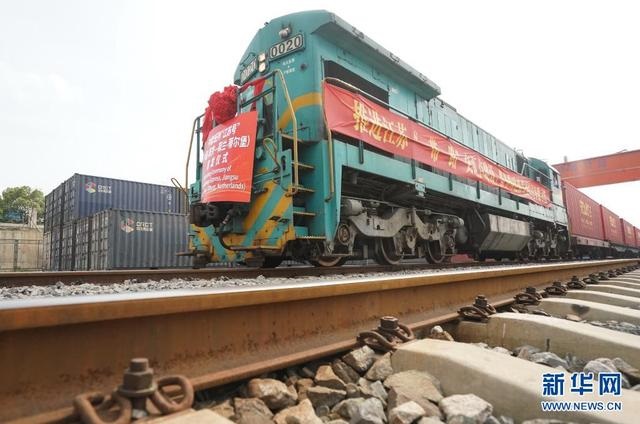 The first China-Europe freight train connecting Nanjing and the city of Tilburg in the Netherlands is ready to depart from Nanjing, May 10. (Photo/Xinhua)

A China-Europe freight train bound for Western Europe from Nanjing, in east China's Jiangsu province, departed for the city of Tilburg in the Netherlands on May 10, with the train set to become the first to depart Nanjing for a destination in Western Europe.

The train is carrying 455 tonnes of goods packed into 100 TEUs (twenty-foot equivalent units), including electronic products, auto parts, daily necessities, and medical equipment. It will pass through Kazakhstan, Belarus, Poland, and Germany, before eventually arriving in the transportation hub of Netherlands where it will finally finish its 11,583-kilometer journey.

It will take about 18 days for the train to arrive in Tilburg, which is only one-third the time it takes to ship items via the traditional maritime route.

In 2015, a China-Europe freight train from Nanjing destined for the European continent departed from the city for the first time. By the end of March this year, the transcontinental freight service between Nanjing and Europe had imported and exported goods whose combined value added up to a total of $2.9 billion worth of goods.

According to Nanjing Customs statistics, 455 trips were made along the China-Europe freight train route to and from Jiangsu province during the January-April period this year.