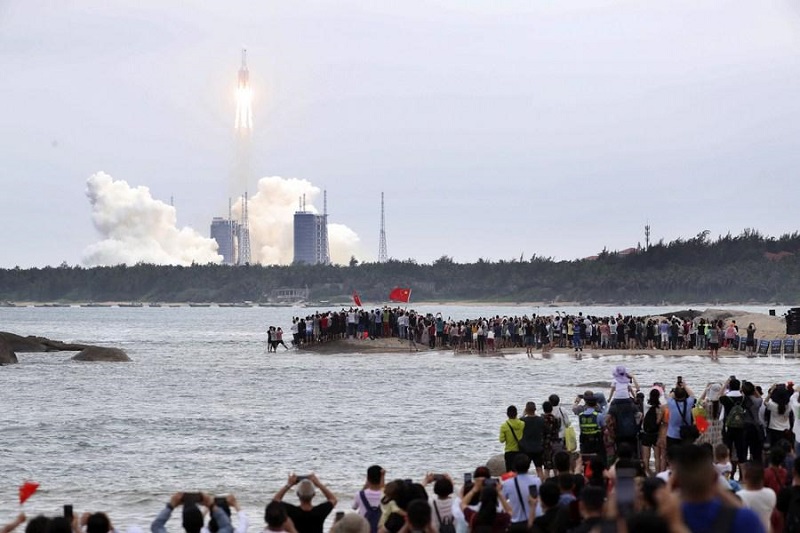 China successfully launched the core module of its space station on Thursday, opening a new foothold for humanity in space.

China's space station, guided by the idea of building a community with a shared future for humanity, will become a common home transcending Earthly bonds and an outpost for countries worldwide to explore the universe through cooperation.

Tianhe, the name of the core module, means Harmony of the Heavens in Chinese, which conveys China's sincere hope to promote mutual trust and peace through international partnerships aboard the space station.

The universe is vast and exploration of it will never end.

As humanity has accumulated technologies to live and work in space, political bias and costs of space exploration are holding some countries back.

China considers its space dream as a part of the dream for all humankind, and its space station a common home in space for everyone.

China's peaceful commitment to outer space has always been crystal clear and consistent.

A white paper published in 2016 stated that China adheres to the principle of using outer space for peaceful purposes and opposes the weaponization of or an arms race in outer space.

In 2016, China signed an agreement with the United Nations Office for Outer Space Affairs (UNOOSA) to offer its space-related technologies and experience to UN member states, in particular developing countries.

In 2018, China welcomed all UN member states to use the space station, from growing plants to accommodating astronauts. The move further demonstrates China's unwavering belief that outer space is the common resource of humankind.

As foreign space agencies have brought up cooperative intentions, China is looking forward to seeing foreign astronauts participate in its space flight missions, working and living in its space station in the future.

Well-structured international cooperation can lower the costs for individual nations, contribute significantly to the goals of each participant, and promote international understanding and a peaceful future.

Space exploration promises a higher perspective on the challenges and problems on Earth. R&D in space have significantly advanced many technologies and make audacious goals come true.

Through cooperation, China's space station is bound to become a scientific research platform shared by the world and benefiting all mankind.