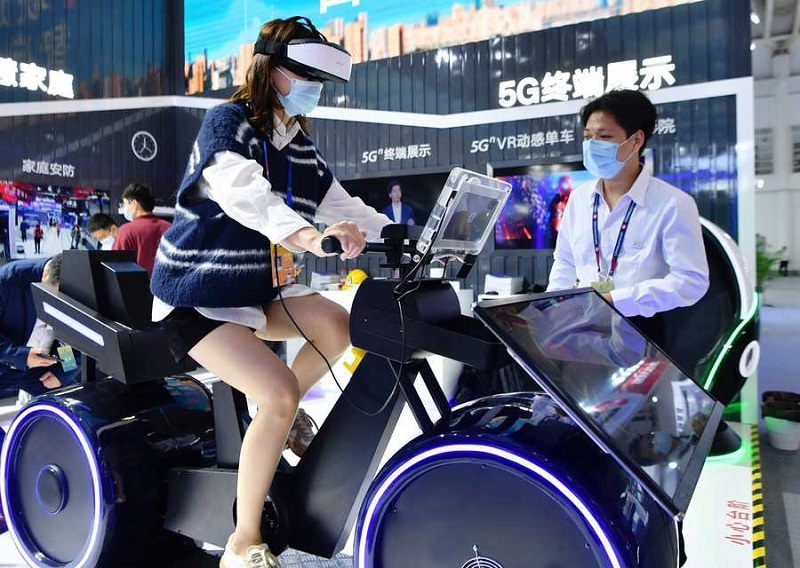 A visitor tries a VR spinning based on 5G technology at the digital achievements exhibition during the fourth Digital China Summit in Fuzhou, southeast China's Fujian Province, April 25, 2021. (Xinhua/Wei Peiquan)

With a super SIM card and app, some Chinese smartphone users will soon be able to make phone calls protected by quantum encryption.

Unlike traditional encryption methods that rely solely on algorithms, quantum encryption is protected by the laws of quantum physics and has ultra-high security.

Phones equipped with super SIM cards are expected to be rolled out by June this year, said Li Wei, a solutions manager with Anhui-based QuantumCTek Group, the quantum firm that developed the phone.

China's scientific and technological workers in this area have made a number of significant, internationally influential innovations over recent years. In 2020, Chinese scientists developed the quantum computer prototype "Jiuzhang."

Two 5G quantum phones, along with other eye-catching tech innovations like unmanned cars and AI-powered drones, were displayed at the fourth Digital China Summit in Fuzhou, capital of east China's Fujian Province, which closed on Monday.

The summit, which was first held in 2018, serves as an important platform to advance the construction of digital China.

The development of cybersecurity and informatization should contribute to China's drive to develop a modernized economy and achieve high-quality development, and to the new model of industrialization, urbanization, and agricultural modernization, President Xi Jinping said at a national conference on the work of cybersecurity and informatization in April 2018.

Efforts should also be made to develop the digital economy, promote deep integration between the internet, big data, artificial intelligence, and real economy, and make the manufacturing, agriculture, and service sectors more digitalized, smart, and internet-powered, said Xi, also general secretary of the Communist Party of China (CPC) Central Committee, chairman of the Central Military Commission, and head of the Central Cyberspace Affairs Commission, at the conference. 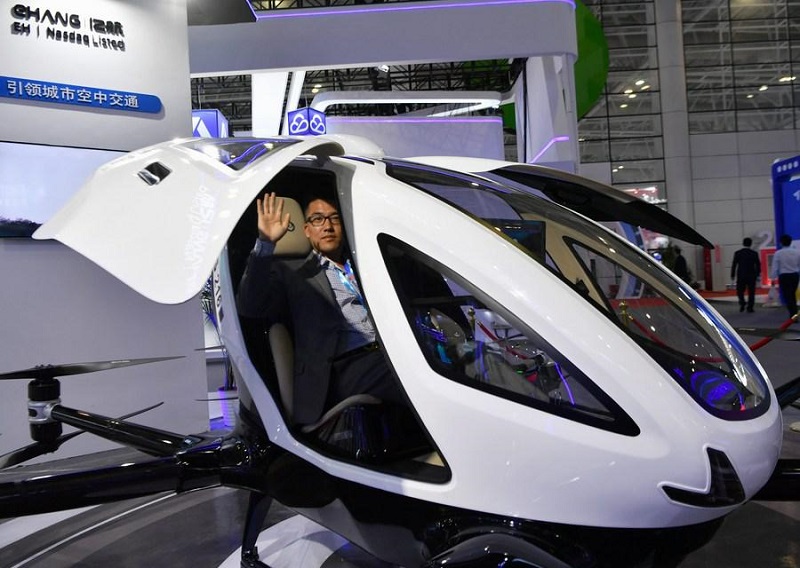 According to a report released by the China Academy of Information and Communications Technology, the scale of China's digital economy reached 39.2 trillion yuan (about 6 trillion U.S. dollars) last year, accounting for 38.6 percent of the country's GDP.

On a pig farm in the suburban Fuqing City of Fujian, an AI-powered overhead camera moves along a rail, counting numbers of pigs and collecting data on their body lengths and temperatures.

The smart solution can finetune the food and water intakes of pregnant pigs at different stages of gestation.

"We feed them more food in the early stage, and reduce their intake in the last stage to make the delivery process easier," said Wu Feilong, deputy general manager of the husbandry company Xingyuan.

Sensors and cameras also detect nitrogen and carbon dioxide levels in the farm's shed, and the ventilation systems are activated as soon as these levels reach a certain threshold.

In the ceramic toilet fixture industry, for instance, manual glazing-induced occupational health issues can be reduced with 5G-assisted robots.

Fujian-based firm JOMOO has replaced humans entirely in the toilet-glazing process at its smart factory. Robots can glaze products evenly and lower the chance of employee health impairments.

In a congratulatory letter to the first Digital China Summit, Xi said digitalization, networking and the application of intelligent technologies, which have been greatly developed, are playing more and more important roles in promoting social and economic development, modernizing China's governance system and capacity, and meeting the people's ever-growing needs for a better life.

Digital technologies are revamping the ways companies and individuals access government services, making services including medical care, transportation and housing available to everyone at all times.

Assisted by AI technology developed by iFlytek, a leading voice-recognition company in China, a "24/7" government service map in Anhui Province can direct users to the services they need based on vague descriptions.

For instance, if a user searches "I'm giving birth," the system will display options like "Issuance of delivery service registration card," or "Birth insurance record inquiry."

So far, the service map has collected information on more than 20,000 government service locations and basically cover all government services frequently used by the people. The map has been visited more than 14 million times and has handled requests and inquiries for 1.7 million users.

The application of 5G in the medical field has become a reality. A 5G-connected computer sits quietly in the summit's exhibition hall, demonstrating how doctors use 5G technology to examine and diagnose patients from a distance.

"Through 5G transmissions, we are able to control the CT scanners in remote hospitals on a real-time basis," said Shi Qingke, director of the IT department of the West China Hospital, Sichuan University.

Shi said that with its large bandwidth and low latency, 5G allows doctors at high-level hospitals to adjust the parameters of CT machines and the doses of radiation directed at patients so as to obtain better images for patients in less developed areas.

China has built more than 1,100 internet hospitals nationwide, and the integration of the internet and healthcare has greatly enhanced people's sense of fulfillment.