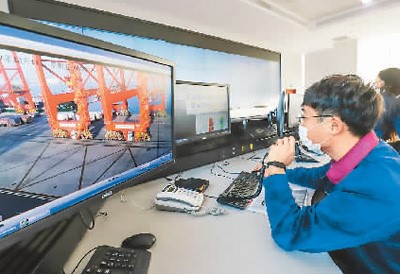 Digitalization has become an important means for traditional enterprises in China to upgrade their business activities in recent years, thanks to the accelerated digital transformation of the Chinese economy and society.

The Hong Kong-based Shing Kee Godown Logistics Co., Ltd., which is principally engaged in logistics businesses in over 60 countries and regions, has put a high priority on technological transformation, deploying new technologies such as big data, cloud computing, and the internet of things to improve its management and operational efficiency.

According to Guo, the company is currently promoting the construction of the World Commodity Trade Center, a major warehousing facility, and integrating the development of its online and offline businesses.

Digital technologies can help to effectively advance the development of other industries, according to Liu Dacheng, deputy director of the Internet Industry Research Institute of Tsinghua University.

The digital transformation of traditional industries plays an increasingly important role in their capacity to achieve the optimal allocation of resources, matching differentiated supply and demand, and helping enterprises lower their costs and improve efficiencies, Liu noted.

In order to strengthen the in-depth integration of digital technologies with the real economy, local governments have continued to roll out their own plans.

"Currently, China’s digital economy has been deeply integrated with the real economy," said Pan Helin, executive dean of the Digital Economic Research Institute at the Zhongnan University of Economics and Law.

While facilitating the transformation and upgrading of traditional industries, the digital economy is creating new growth points for various industries and transforming the way we produce things and live our lives, Pan added.

In an attempt to help enterprises accelerate their digital transformation, China has implemented a series of targeted measures. According to a recent notice jointly issued by China’s National Development and Reform Commission along with other departments, the country will vigorously develop intelligent manufacturing so as to promote a fundamental change in the development model applied to manufacturing and business operations, accelerating the development of industrial software and the industrial internet, and fostering collaboration between manufacturing, design and data platforms.

#COVID-19 #CPC #COVAX
This page is provided in cooperation with People's Daily Online.