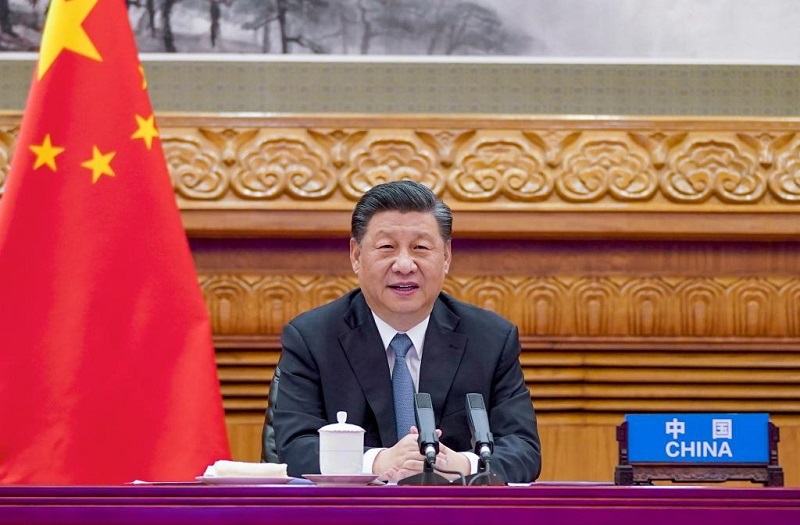 The leaders of the three countries exchanged in-depth views on cooperation in coping with climate change, China-Europe relations, anti-pandemic cooperation, and major international and regional issues.

Xi stressed that he always advocates building a community with a shared future for humanity and stands ready to strengthen cooperation with France and Germany on addressing climate change.

"I announced that China will strive to peak carbon dioxide emissions by 2030 and achieve carbon neutrality by 2060. It means China, as the world's largest developing country, will complete the world's most dramatic reduction in carbon emission intensity, and realize carbon neutrality from carbon peaking in the shortest time in global history," he said.

He said the task is extremely challenging but China will deliver on its promise.

Xi said China has included carbon peaking and carbon neutrality in its overall plan for ecological conservation, and promoted the development of a green and low-carbon circular economy in an all-round way. China has decided to accept the Kigali Amendment to the Montreal Protocol and strengthen the control of non-carbon dioxide greenhouse gases such as hydrofluorocarbons (HFCs), he added.

Responding to climate change is the common cause of all humanity, he said, adding that it should not be a bargaining chip for geopolitics, a target for attacking other countries, or an excuse for trade barriers.

Xi said China will adhere to the principles of equity, common but differentiated responsibilities and respective capabilities, promote the implementation of the United Nations Framework Convention on Climate Change (UNFCCC) and the Paris Agreement, and actively develop South-South cooperation on climate change. 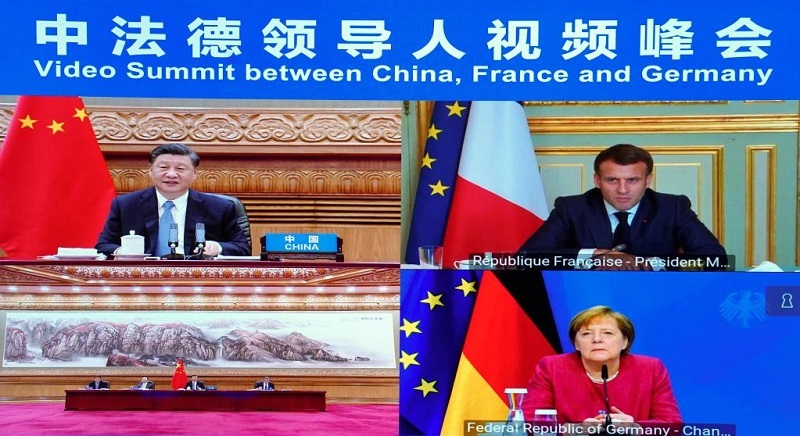 It is hoped that developed economies will set an example in reducing emissions and take the lead in fulfilling their funding commitments to provide adequate technical and capacity-building support for developing countries to tackle climate change, Xi said.

China will expand high-level opening-up and create a fair, just, and non-discriminatory business environment for foreign-invested enterprises, including French and German companies, he said. He expressed the hope that Europe can also treat Chinese enterprises with such a positive attitude and work together with China to strengthen the China-Europe green and digital partnerships and enhance cooperation in combating the pandemic.

Xi said China opposes "vaccine nationalism" and a man-made vaccine divide, and is willing to work with the international community, including France and Germany, to ensure timely access to vaccines for the developing world.

China stands ready to work with the International Olympic Committee to provide vaccines to athletes preparing to enter the Olympic Games, he said. 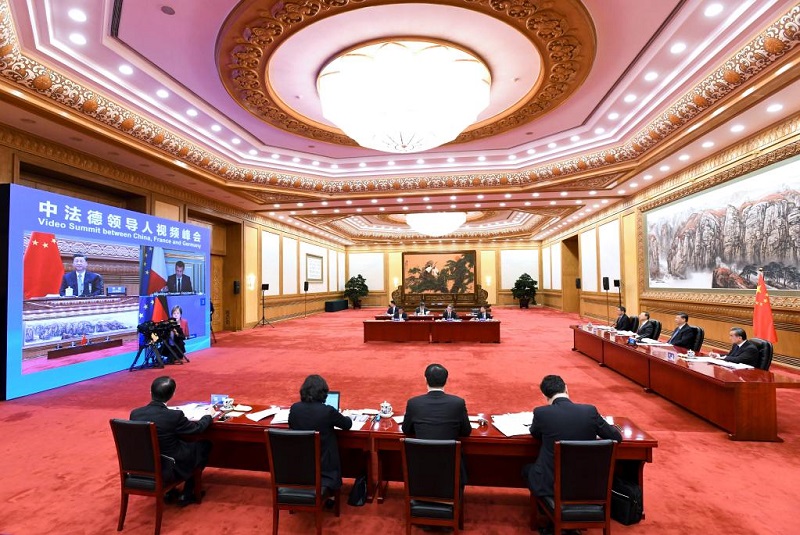 Vaccines should not become a tool for competition among major countries, Macron said. He added that France is willing to strengthen cooperation with China on the equitable distribution of vaccines and strengthen coordination on regional issues, including the Iran nuclear issue.

Merkel said that it is extremely important for Germany, France, and China to strengthen cooperation in tackling climate change. The nationally determined contributions China announced are both ambitious and challenging and are very important in coping with climate change globally.

She said that Europe is willing to strengthen policy communication and alignment with China. China's economy realized a recovery growth first, which is good news for the world. Germany values the opportunities that the implementation of China's 14th Five-Year Plan brings to Germany-China and Europe-China cooperation, and is willing to deepen mutually beneficial economic and trade cooperation with China, strengthen communication on issues such as the digital economy and network security, and treat enterprises from all countries equally and avoid trade barriers.

She expressed the hope that with joint efforts from both sides, the EU-China investment agreement will take effect at an early date.

The three leaders agreed that it is necessary to uphold multilateralism, fully implement the Paris Agreement, and jointly build a fair, reasonable, cooperative, and win-win global climate governance system, and promote this summit to achieve positive, balanced, and pragmatic results.

All sides agreed to coordinate in running the 15th meeting of the Conference of the Parties to the Convention on Biological Diversity to be held this year in China's Kunming, the UN Climate Change Conference in Glasgow, Britain, and the 7th International Union for Conservation of Nature's World Conservation Congress in the French city of Marseilles, to create a new pattern of global environmental governance.

The three leaders agreed to support COVAX, promote the healthy, safe, and orderly personnel exchanges, safeguard the smooth and stable industrial chain and promote the international economic and trade cooperation return to normalcy at an early date.

They also support the development of energy supply in developing countries in an efficient, clean, and diversified direction.