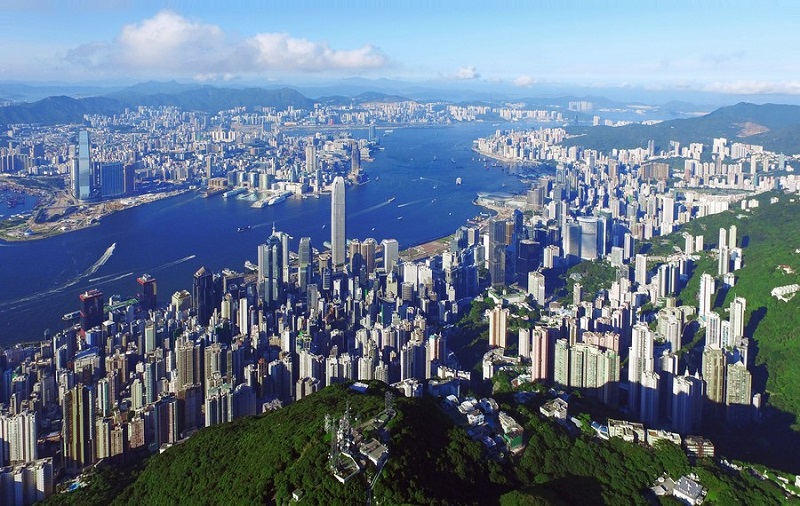 Aerial photo taken on June 27, 2017 shows the scenery on the both sides of the Victoria Harbor in Hong Kong, south China. (Xinhua/Lui Siu Wai)

The ending of chaos and resumption of stability in Hong Kong is a fact that all Chinese people, including Hong Kong compatriots, are glad to see. The so-called 2021 Hong Kong Policy Act Report issued by the U.S. Department of State on March 31 is complete slandering.

The report, arbitrarily fabricating lies and attacking the national security law in the Hong Kong Special Administrative Region (HKSAR), claimed, in a super exaggerated manner, that Hong Kong's autonomy was "undermined," and tried to frame China with groundless accusations.

It must be pointed out that the so-called report, fantasizing about troubling Hong Kong with lies, is a total miscalculation.

The law on safeguarding national security in the HKSAR initiated a major transition in Hong Kong and has brought stability back to the city. It improved Hong Kong's electoral system and developed its democratic system, offering institutional guarantee for the long-term development of the "one country, two systems" policy and the stability of the HKSAR.

Today's Hong Kong society is no long troubled with rioters and "burn with us" tactic. It is enjoying stability, and all sectors are united to combat COVID-19, improve livelihood and revitalize economy.

Such positive transition is telling more and more Hong Kong compatriots that only a strong China can prevent Hong Kong from falling into the abyss of "color revolution", ensure the complete implementation of the "one country, two systems" policy, and bring a bright future for Hong Kong.

The so-called "impact" on freedom claimed by the U.S. is never the truth. Since Hong Kong returned to the motherland, the central government of China has always fully and faithfully implemented the principle of "one country, two systems," under which the people of Hong Kong govern Hong Kong. The central government has also acted in strict accordance with the Constitution and Hong Kong's Basic Law. The HKSAR enjoys a high degree of autonomy and its residents enjoy democratic rights and freedom in accordance with law as never before.

Since the implementation of the law on safeguarding national security in the HKSAR, Hong Hong's illegal violent protests have been put under control, and the region's economic and social orders were brought back to stability. Hong Kong residents are living and working in contentment, which has further reinforced people's confidence that the law will bring back long-term stability for Hong Kong.

The truths reflect people's aspiration and the general trend. No matter how many lies the U.S. fabricates on issues related to Hong Kong, or how it tries to manipulate these issues politically, it is just making feeble noises in front of the magnificent power of justice.

The central government of China offered all-round support for Hong Kong in multiple fields. It helped Hong Kong to combat COVID-19, and supports Hong Kong to enhance its status as an international financial, transportation and trade center. The Guangdong-Hong Kong-Macao Greater Bay Area will be a key growth point of China's economy in the future, and will definitely further activate Hong Kong's development potential.

There's no doubt that the U.S., canceling or threatening to cancel the so-called special status of Hong Kong, will never contain Hong Kong's prosperity, or the region's integration into the motherland.

Having experienced the turbulences in recent years, all Chinese people, including Hong Kong compatriots, as well as international personnel that hold an objective attitude toward China, are gaining a deeper understanding of the "one country, two systems" policy, and becoming more immune to the lies fabricated by a few western countries, including the U.S. Most of the countries are choosing to standing by justice on multilateral platforms, such as the UN, to oppose a few western countries that interfere in China's domestic affairs and support China's position and measures on Hong Kong affairs.

Hong Kong is part of China and its affairs are entirely China's internal affairs. The U.S. side must practically obey international law and the norms governing international relations, and stop interfering in China's domestic affairs in all forms.

History will eventually prove that the great cause of the "one country, two systems" policy will finally remove interference and continue developing. Hong Kong will also maintain long-term stability and prosperity to shine as the "Pearl of the Orient."

(Zhong Sheng is a pen name often used by People's Daily to express its views on foreign policy.)