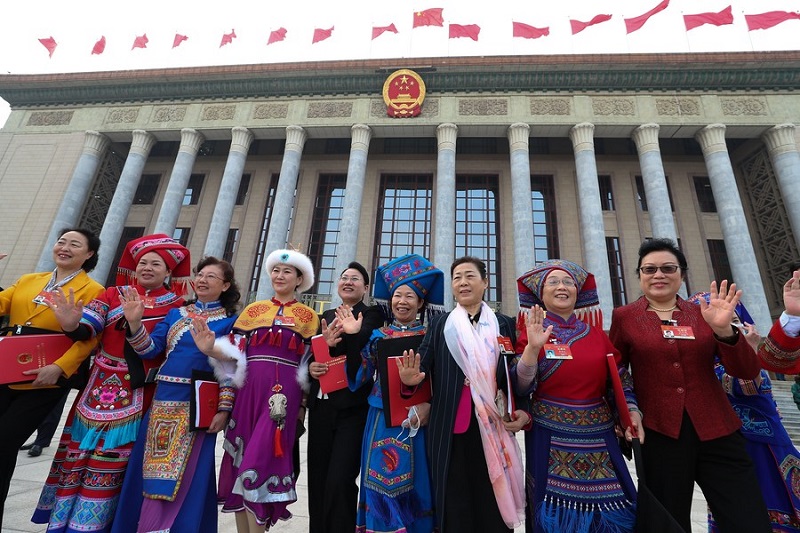 Deputies to the 13th National People's Congress (NPC) leave the Great Hall of the People after the closing meeting of the fourth session of the 13th NPC in Beijing, capital of China, March 11, 2021. (Xinhua/Cao Can)

The 8,993 proposals which were submitted to China's annual legislative session this year were transferred to relevant departments for research and handling today, a vivid example of Chinese democracy transforming people's voices into concrete plans and actions.

The National People's Congress (NPC) Standing Committee has set 22 priority topics, which can be categorized into six aspects including ensuring the livelihoods of the people, planning the work of the NPC Standing Committee, accelerating the development of a modern industrial system, comprehensively advancing rural vitalization, implementing the regional development strategies and promoting green development, according to the data made public Tuesday.

The move is a critical step for Chinese authorities to fulfill their duties in service of the people, coordinate the aspirations and demands of the whole of society and make decisions that serve the fundamental interests of the overwhelming majority. The proposals received included suggestions, critiques and comments, through which the authorities can learn about the pressing needs of the people and nation, and push forward policies accordingly.

A quality democracy cannot be realized without delivering. Many critics regard China's annual national "two sessions" as a key window into Chinese democracy. That is true, but the operation of Chinese democracy does not stop at the "window." Handling the proposals demonstrates that Chinese authorities see taking concrete actions to solve the problems of the people as a top priority.

By late January, all 9,180 suggestions submitted by NPC deputies to last year's annual NPC session had been handled, with feedback provided. Various departments of the State Council adopted approximately 3,700 pieces of advice from NPC deputies and political advisors and subsequently introduced some 1,500 related policy measures.

By listening to suggestions and recommendations and accepting criticism and scrutiny through various forms of consultation, decision makers are able to reach the broadest possible consensus in all their decisions and work. Over the past decades, Chinese democracy has helped the country improve dramatically, not only economically but also ecologically, socially and culturally.

There is no perfect democracy, only democracy that fits best. Many Chinese know the story of Yan Zi, who lived over 2,500 years ago. He visited the State of Chu and told the king how sweet oranges from the south, when transplanted north, became bitter. China takes pride and has full confidence in its own model of democracy, but also respects the development paths of other countries and has no interest in engaging in ideological confrontation or exporting its social system abroad.

If there is a message that China wants to send through its democratic undertakings, it is the country's firm determination to protect the lives, health, rights and interests of the people. It is time to better understand the essence of Chinese democracy and its significance to the progress of human society.