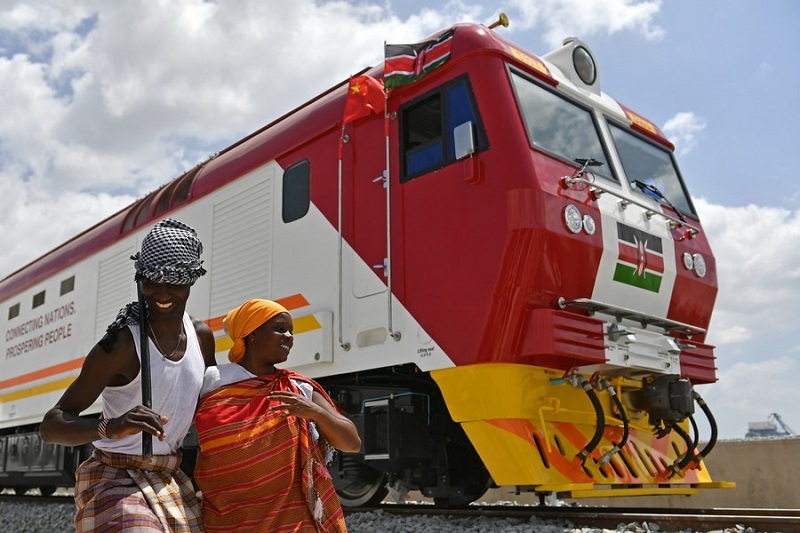 Kenyans sing and dance beside a Chinese-made locomotive for the Mombasa-Nairobi Standard Gauge Railway, in Mombasa of Kenya Jan. 11, 2017. (Xinhua/Sun Ruibo)

The answer is obvious. The exchanges between China and Africa are based on win-win cooperation and mutual development that deliver tangible benefits to people from both sides. Such baseless accusations are merely a feeble attempt to defy China and sow discord between China and its partners.

The most common speculation is Chinese imperialism in Africa, with media and politicians talking about China's "predatory practices" and dominance. This assumption is full of logical fallacies and does not stand up to close analysis.

The "apparent" evidence of "Chinese imperialism" in Africa claimed by the West is the fact that China's growing investment has overtaken that of Western countries.

Is this massive investment tantamount to imperialism? The critical ingredient of imperialism lies in domination and coercion through which a colonial power can gain political and economic control of territory and people. The recipient countries welcomed Chinese investments in Africa because the cooperation is equal and can benefit both sides. There is no sign of coercion and domination in this investment.

According to Chinese Ambassador to the African Union Liu Yuxi's byline article in the Beijing-based China Investment magazine, as of August 2020, the China-Africa Development Fund had invested more than $5.4 billion in 37 African countries, driving Chinese companies' investment in Africa to $26 billion.

By 2019, Chinese FDI in Africa had reached 49.1 billion dollars, an increase of nearly 100 times from 2000. China relies on investment and financing platforms such as special loans for the Belt and Road Initiative, the Silk Road Fund, the China-Africa Development Fund, and the China-Africa Industrial Capacity Cooperation Fund, to provide financial support for the joint construction of the Belt and Road Initiative. As of August 2020, the China-Africa Development Fund had invested more than 5.4 billion dollars in 37 African countries. The investment is used in a variety of fields including infrastructure, production capacity cooperation, agriculture and people's livelihood, energy and minerals, prompting Chinese companies to invest 26 billion dollars in Africa.

The investment flows to sectors such as infrastructure, energy and mining, which will boost economic development in a continent that Western colonial powers have actively exploited for centuries.

"China has built more infrastructure in Africa in two decades than the West has in centuries," wrote W Gyude Moore, Liberia's former minister of public works, in his article published in Pearls and Irritations, John Menadue's public policy journal.  He also added that there had never been a continental-scale infrastructure building program for Africa's railways, roads, ports, water filtration plants and power stations under European colonialism.

Apart from boosting the countries' revenues, China's investment also promotes local employment. Since 2017, China has become the top job creator in Africa, and the number of jobs created by Chinese companies continues to grow. Take South Africa, the largest investment destination for Chinese enterprises in Africa, as an example. Chinese enterprises have created 400,000 jobs for the nation, according to Chen Xiaodong, Chinese Ambassador to South Africa.

Numerous facts prove that China's investment in African countries benefits both sides without coercion and domination, which is far from imperialism.

Another narrative often used by the Western media and politicians to smear China-Africa cooperation is that China is setting up a "debt trap" for recipient countries, deliberately pushing poor countries into debt as a way of seizing their assets or gaining a greater say in their internal affairs.

Deborah Brautigam, a professor of international political economy at Johns Hopkins University and founding director of the China Africa Research Initiative (CARI), who has conducted extensive research on the question of China's economic engagement with Africa, thinks the "debt trap" narrative is a myth.

Western financial institutions often attached economic policy conditions on their loans so that debtor countries were forced to accept the unfair terms. For instance, the IMF's notorious Structural Adjustment Programme offers emergency funds in exchange for a set of neoliberal economic reforms based on "fiscal responsibility" (austerity) and "maximization of market efficiencies" (privatisation).

China's development loans are entirely different. "Chinese aid has far fewer strings attached than that of Western nations and institutions," wrote Martin Jacques in his book When China Rules the World.

This can explain why China's investment and loans are welcomed among African countries. "China's expanding presence in Africa can only be a good thing… because it means that we don't have to sign on the dotted line whatever is shoved under our noses any longer… We now have alternatives, and that's to our benefit," said Rob Davies, a former South African minister of trade and industry.

Former US Attorney General William Barr once claimed that China is conducting "debt-trap diplomacy", as China is "loading poor countries up with debt, refusing to renegotiate terms and then taking control of the infrastructure itself." Experts prove that such accusations are completely groundless.

"Chinese banks are willing to restructure the terms of existing loans and have never actually seized an asset from any country," said Brautigam.

Kevin Acker, the research manager at the Johns Hopkins School of Advanced International Studies CARI, shares that opinion. "China's banks offered African countries significant debt restructuring before the pandemic and have continued to do so," he wrote in an article published in the Washington Post.

Since the pandemic, China has attached great importance to debt suspension and alleviation in Africa. The country has waived interest-free loans due to mature by the end of 2020 for 15 African countries, according to Wang.

"We never press countries that have difficulties with debt repayment, not to mention asking them to sign any imparity clause," said Wang, refuting the "debt trap" allegations.

The truth about China-Africa cooperation, which has effectively advanced Africa's economic and social development and improved livelihoods, has been widely, perhaps wilfully, misunderstood by Western society. Micheal Ondaatje, one of Sri Lanka's most significant chroniclers, once wrote, "A well-told lie is worth a thousand facts." The narrative of Chinese imperialism in Africa and Chinese debt-trap diplomacy are such examples of well-told lies made up by Western politicians. 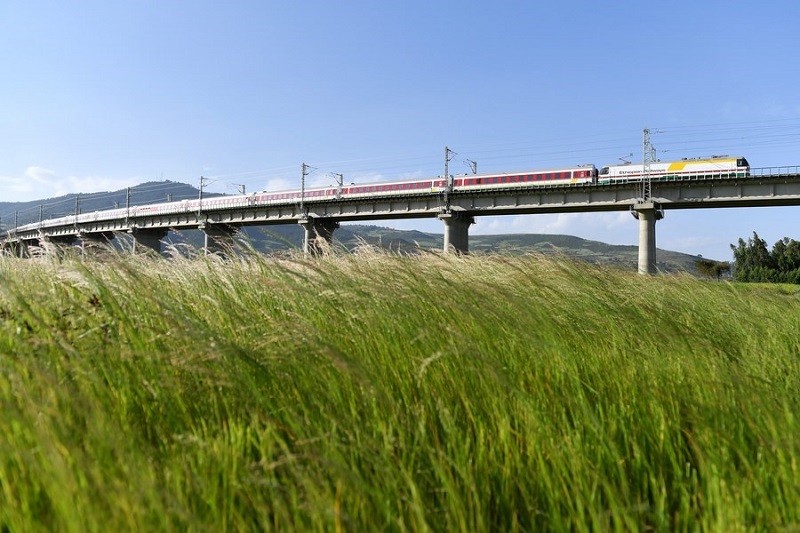 A train runs on the Ethiopia-Djibouti railway during an operational test near Addis Ababa, Ethiopia, on Oct. 3, 2016. (Xinhua/Sun Ruibo)