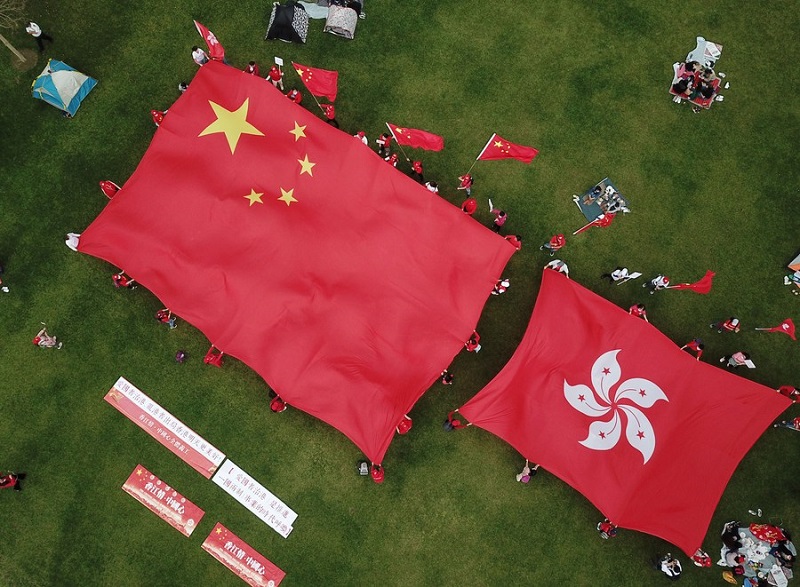 -- The amended annexes were passed at China's top legislature with a unanimous vote.

-- "A democratic electoral system suiting Hong Kong's legal status and reality has taken shape as a result of the amendments," top legislator says.

-- The overall design of the system is centered around restructuring and empowering the Election Committee.

-- Staunch support has been expressed by Hong Kong residents.

The amended Annex I and Annex II to the Basic Law of the Hong Kong Special Administrative Region (HKSAR) were passed at a session of the National People's Congress (NPC) Standing Committee with a unanimous vote from all 167 committee members in attendance.

President Xi Jinping has signed presidential orders to promulgate the amended annexes, which will go into effect on Wednesday.

"A democratic electoral system suiting Hong Kong's legal status and reality has taken shape as a result of the amendments," said Li Zhanshu, chairman of the NPC Standing Committee when presiding over the session's closing meeting.

Li said the two amended annexes fully demonstrate the resolution and common will of the Chinese people, including Hong Kong compatriots, in safeguarding national sovereignty, security and development interests as well as the constitutional order of the HKSAR.

HKSAR Chief Executive Carrie Lam said Tuesday in a statement that by improving the electoral system and implementing "patriots administering Hong Kong," the excessive politicization in society and the internal rift that has torn Hong Kong apart can be effectively mitigated, thereby enhancing the governance capability of the HKSAR.

"I and the HKSAR Government will spare no effort in taking forward the necessary amendments to the local electoral legislation in accordance with the amended Annex I and Annex II," said Lam.

The overall design of the system was centered around the reformation and greater empowerment of the Election Committee of the HKSAR. 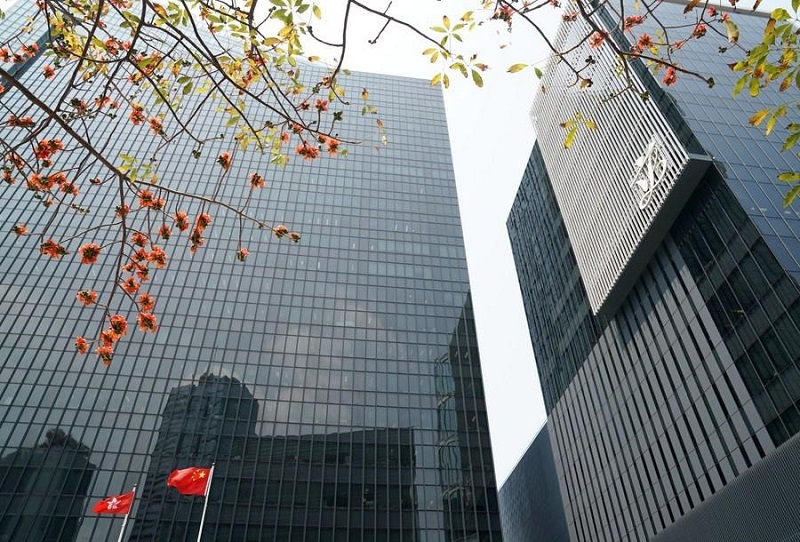 Photo taken on March 12, 2021 shows the exterior of the headquarters of the Hong Kong Special Administrative Region government and the Legislative Council in Hong Kong, south China. (Xinhua/Li Gang)

Apart from its original function of nominating and electing the chief executive, the committee will have two more key functions: electing a relatively large proportion of LegCo members and participating in the nominations of all LegCo candidates.

"With the enlargement, increased number of sectors, adjusted subsectors and renewed functions, the Election Committee will have a broader base and be more representative of society, leading to more balanced participation from people from all walks of life," said Zhang Yong, deputy head of the Legislative Affairs Commission of the NPC Standing Committee.

The amendments also expand LegCo membership from 70 to 90. Among the members, 40 shall be returned by the Election Committee, 30 by functional constituencies and 20 by geographical constituencies through direct elections.

According to the amendments, the seats of District Council members are canceled in both the Election Committee and the LegCo. 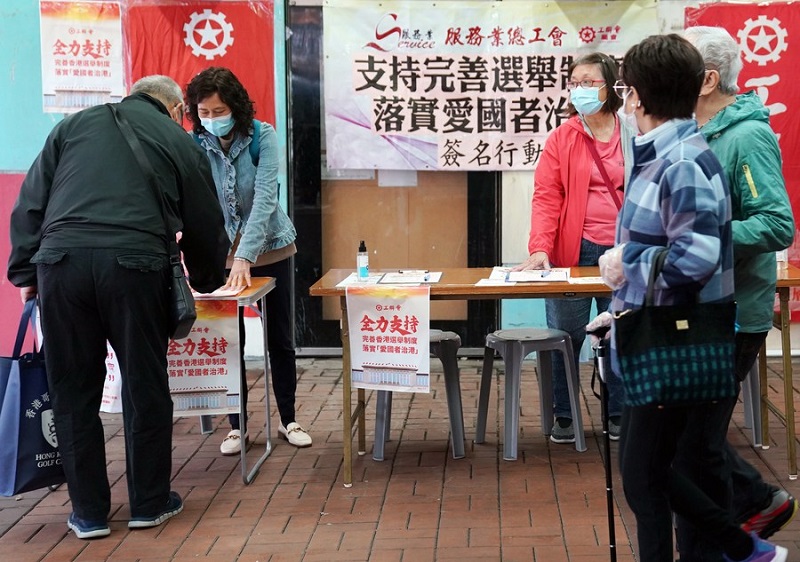 In recent years, District Councils have seriously deviated from their functions and nature prescribed by the Basic Law, which stipulates that District Councils are "district organizations which are not organs of political power" and may "be consulted by the government of the Region on district administration and other affairs," explained Deng.

Funded by the government, District Councils should concentrate on promoting the well-being of grassroots communities, provide valuable and constructive suggestions to the HKSAR government, and work as a bridge connecting the government with ordinary people, Deng added.

According to the new annexes, a candidate eligibility review mechanism shall be established to review and confirm the eligibility of candidates for the Election Committee, the office of chief executive, and the LegCo.

This is to ensure candidates meet not only the general eligibility requirements, but also the legal requirements and conditions of upholding the Basic Law and swearing allegiance to the HKSAR, so as to fully implement the principle of "patriots administering Hong Kong," said Deng.

Plugging loopholes and defects in the HKSAR's current electoral system and improving methods for the selection of the HKSAR chief executive and the formation of the LegCo in a systematic manner are the common aspirations of the Chinese people, including Hong Kong compatriots, said the Hong Kong and Macao Affairs Office of the State Council in a statement.

The office called on all sectors of Hong Kong to support the work of the HKSAR government and LegCo, so as to create an optimal environment for various elections to be held on schedule. 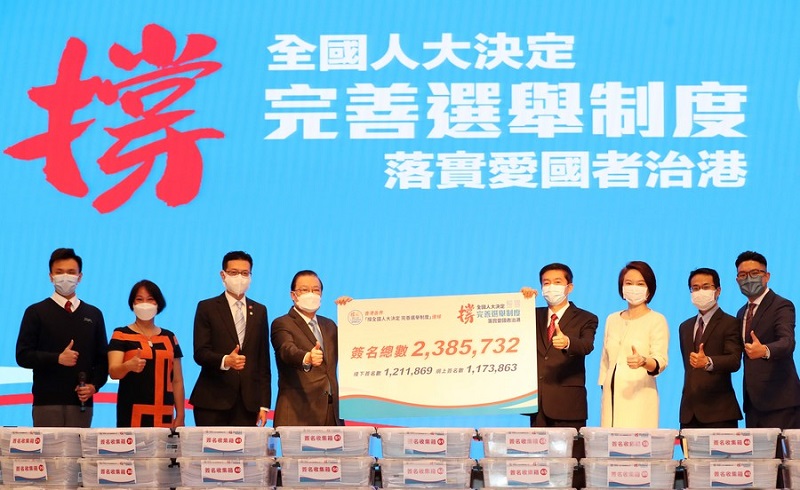 Tam Yiu-chung (4th L), one of the conveners, hands over a petition signed by over 2.38 million people in support of improving Hong Kong's electoral system to Luo Huining (4th R), director of the Liaison Office of the Central People's Government in the Hong Kong Special Administrative Region, in Hong Kong, south China, March 24, 2021. (Xinhua/Li Gang)

Staunch support for the improvement of Hong Kong's electoral system has been expressed by local residents.

A public petition launched in support of the legislative move received over 2.38 million signatures in Hong Kong.

According to a survey by local think-tank Bauhinia Institute, nearly 70 percent of the 1,366 Hong Kong residents interviewed at random support the effort to improve the electoral system, and 66.8 percent agree on the composition of the Election Committee as it can better reflect the overall interests of Hong Kong society.

It is quite obvious that Hong Kong residents hope for a stable society and "patriots administering Hong Kong," said LegCo member Chan Han-pan.