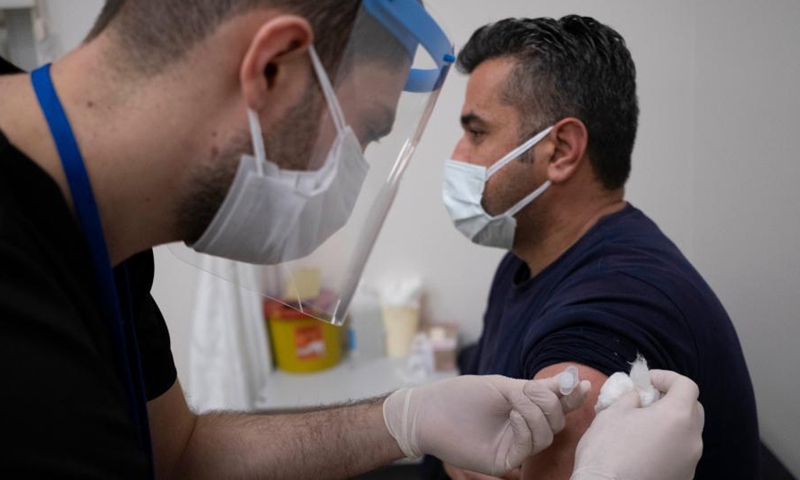 A health worker receives a dose of COVID-19 vaccine from China in Istanbul, Turkey, Jan. 14, 2021. Photo:Xinhua

A video of Serbian President Aleksandar Vucic welcoming the arrival of the COVID-19 vaccines in the cold wind went viral on Chinese social media platforms over the weekend, touching millions of Chinese netizens who applauded Vucic's strong endorsement of Chinese vaccines, which is of much significance amid fierce smearing from some Western media outlets.

"I went to the airport not only to receive the high-quality vaccines, but to demonstrate the friendship between China and Serbia," Vucic said Saturday according to a video posted by the People's Daily on China's Twitter-like Sina Weibo.

Vucic made the remarks at Nikola Tesla International Airport when receiving the first batch of one million doses of COVID-19 vaccines produced by China's pharmaceutical company Sinopharm together with local officials, and the Chinese Ambassador to Serbia Chen Bo in Belgrade, the capital of Serbia, on Saturday, according to the People's Daily.

This batch was said to be the first large-scale arrival of all eight million vaccines Serbia purchased from three different producers.

Serbia has also purchased Russia's Sputnik V COVID-19 vaccine as well as a vaccine jointly developed by the US' Pfizer and Germany's BioNTech. The country plans to vaccinate 80 percent of its population of seven million, according to the Xinhua News Agency.

In an apparent show of confidence in Chinese vaccines, the Serbian president said that he would get vaccinated with the Sinopharm vaccine, Xinhua reported.

Vucic is not the only foreign president or senior official who is confident in China's vaccines. Turkish President Tayyip Erdogan had his first dose of CoronaVac, produced by China's Sinovac on Thursday, the day Turkey kicked off mass inoculations using CoronaVac after the authorities approved emergency use of the Chinese vaccine, Xinhua reported.

At least 20 countries have purchased COVID-19 vaccines developed by Chinese manufacturers including Sinovac, Sinopharm and Cansino, according to the Global Times' calculations, with more planning to purchase Chinese vaccines despite some Western media's intense scrutiny over their efficacy and safety.

China has promised to provide its vaccines as a global public good to lead the worldwide recovery from the pandemic and has also revealed on some occasions it will donate vaccines to certain countries.

On Saturday, Chinese Foreign Minister Wang Yi concluded a six-day visit to Southeast Asia, during which Wang said China decided to donate a batch of COVID-19 vaccines to Myanmar and the Philippines, continuing to help them combat the novel coronavirus, according to Xinhua.

Previously, Turkey's Health Minister Fahrettin Koca received the first dose of CoronaVac live on television on Wednesday, becoming the first one in Turkey to receive the COVID-19 vaccine.

Indonesia and Malaysia have also ordered Sinovac vaccines - 125.5 million and 14 million doses respectively. Thailand and the Philippines are expected to receive millions of doses from China in the coming months, according to Xinhua.

The Indonesian Ambassador to China Djauhari Oratmangun told the Global Times in an exclusive interview on Thursday that Indonesia has already begun mass vaccinations on Wednesday, thanks to sound collaboration with China.

He expressed his confidence in the Chinese vaccine, noting that the Sinovac vaccine has received a license from Indonesian authorities after scientific and technical evaluation.

"Indonesia's trust and confidence in Sinovac's vaccine is reflected in Widodo being the first to receive a jab. We share President Widodo's sentiments," the ambassador said.

The long road ahead

In a BBC report that many in China believe to be aimed at defaming Chinese vaccines on Friday, when the reporter asked a Turkish doctor whether he was worried about the vaccine's efficacy, the answer was an unequivocal "no." The local doctor also noted that clinical trials of the vaccine in Turkey showed more than 90 percent efficacy.

The doctor also admitted in the report that a level of distrust regarding Chinese vaccines is common around the world, maybe even reflecting the image of Chinese products in most people's eyes. "Unfortunately, this is true," said a Chinese vaccine industry insider reached by the Global Times.

The pandemic has put Chinese vaccines under global scrutiny. Large number of overseas purchase has boosted confidence in them. But insiders noted that there is a long road ahead for them to explore the international market, especially given continuous politicization of the vaccines amid the COVID-19 pandemic.

The COVID-19 pandemic is a great opportunity for Chinese vaccine producers but the challenge remains huge, the insider noted.

Chinese vaccine producers have mostly focused on the domestic market before the COVID-19 pandemic and most of them barely export their products as the domestic market is big enough, a vaccine expert based in Changchun, Northeast China's Jilin Province, told the Global Times on Sunday under the condition of anonymity.

The international vaccine market has been mostly dominated by the big four major pharmaceutical companies, namely Pfizer, Merck, GSK and Sanofi, so there is little incentive or market space to encourage Chinese companies to branch out.

The big four major producers occupy about 90 percent of the international vaccine market, according to a report from Guangfa Securities in March 2020.

"But I can say that Chinese vaccines have no questions," said the anonymous expert, noting that it will take time to establish a reputation in the international market. Chinese companies can treat the COVID-19 pandemic as an opportunity to gradually increase international cooperation.

Smear from the Western media outlets, especially after Brazilian authorities revealed a 50.4 percent efficacy rate in CoronaVac's late-stage trials, is also a huge hurdle that prevents many people in the West from viewing Chinese vaccines in an objective and scientific way, Chinese observers noted.

While hyping up doubt over CoronaVac's late-stage data, mainstream English-language media mentioned little about the deaths of 23 elderly Norwegian people after they were vaccinated with Pfizer vaccines as if those media outlets had already reached a consensus to downplay the incident.

CNBG is conducting Phase III clinical trials on two of its inactivated COVID-19 vaccines in 10 countries covering more than 50,000 volunteers, according to Yang.

The anonymous expert suggests that Chinese vaccine companies can try to cooperate with Western countries in the future like the US and the EU. It would be easier for the world to accept Chinese vaccines' if they obtain certificates from authorities in these nations.

#COVID-19 #2021 #Vucic
This page is provided in cooperation with People's Daily Online.