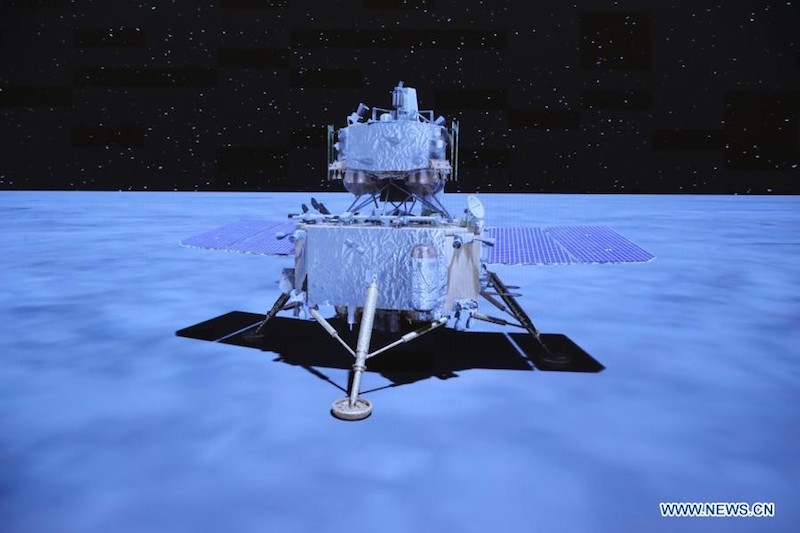 This image taken from video animation at Beijing Aerospace Control Center (BACC) on Dec. 2, 2020 shows Chang'e-5 spacecraft landing on the moon. China's Chang'e-5 spacecraft successfully landed on the near side of the moon and sent back images, the China National Space Administration (CNSA) announced. (Xinhua/Jin Liwang)

Fly to the Moon: China’s lunar probe and tech advancement during the pandemic

For centuries, Chinese people have been making endless efforts to explore the secrets of the moon. For the past few decades, China has designed and developed many satellites and spaceships for exploring the moon, but it is in December, when China’s Chang’e-5 probe retrieved 1,731 g of lunar soil and rock samples to earth, that has caught the world’s attention. It was China’s first sample-return mission and the first lunar sample-return mission since the former Soviet Union’s Luna 24 in 1976. By completing the mission, China became the third country to successfully obtain samples returned from the moon after the United States and the former Soviet Union.

The success of Chang’e-5 is prominent. For decades. China’s research on the moon was heavily dependent on a sample of one gram of moon soil donated by the US in 1978. According to South China Morning Post, unlike those collected by the Americans and Soviets, the new samples were retrieved from a geologically younger area of the moon, which means they could reveal new information about its history.

The Chang'e-5 probe, comprising an orbiter, a lander, an ascender and a returner, was launched on Nov. 24. The return capsule landed in Inner Mongolia Autonomous Region in the early hours of December 17, bringing back the samples collected from the moon.

According to the China National Space Administration (CNSA), it would release the relevant policies for the lunar samples retrieved by Chang'e-5 to coordinate and promote scientific research, encourage more scientists at home and abroad to participate, and strive to secure more scientific achievements.

The CNSA will also carry out public science popularization programs and cultural exchanges related to the mission.

#CNSA #CHang'e-5 #2021 #Pandemic
This page is provided in cooperation with People's Daily Online.