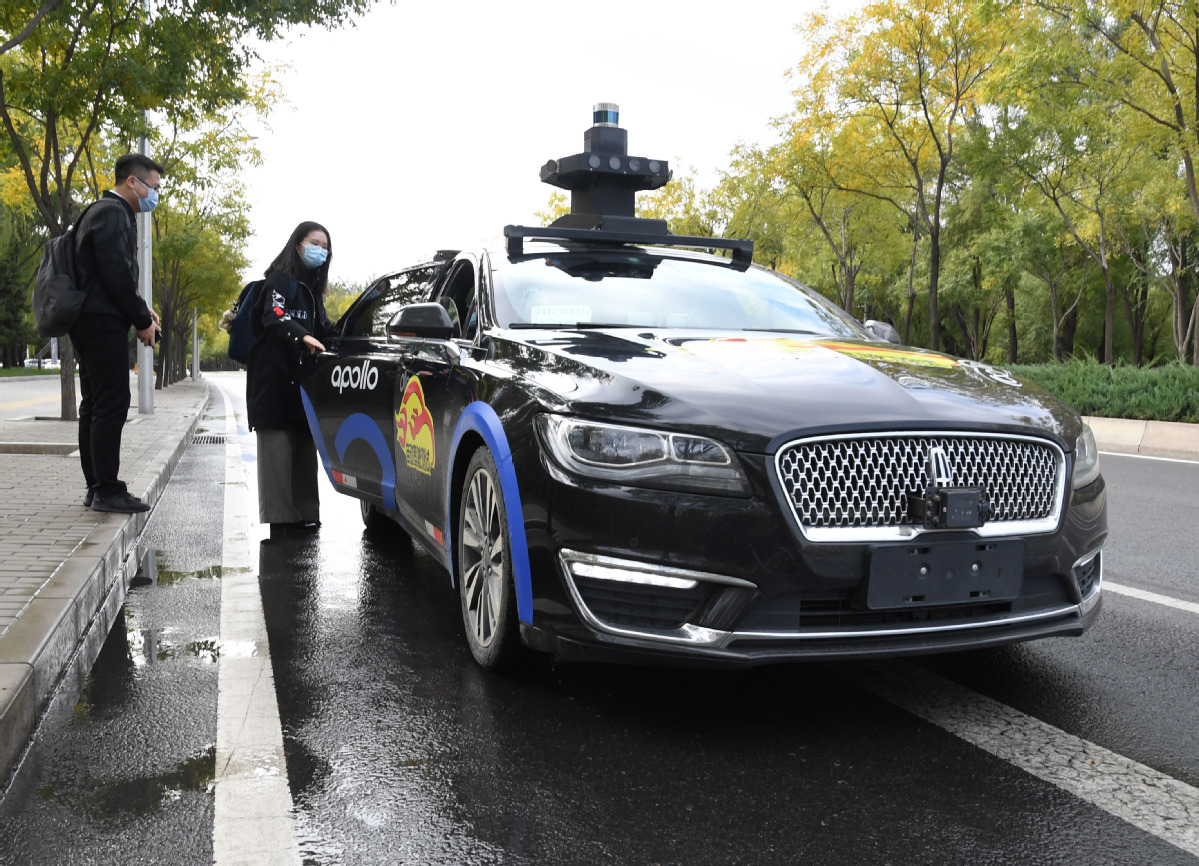 A passenger gets ready to board an Apollo Go Robotaxi, operated by Baidu, in Beijing. [Photo/XINHUA]

The announcement makes Baidu the first and only company which has got permission to conduct driverless tests-where there is no safety driver in the autonomous driving vehicle-on public streets in the capital.

Experts said obtaining the driverless testing permit in Beijing is a breakthrough that will accelerate the large-scale deployment of autonomous driving technology across the nation.

Beijing has the most stringent safety requirements for obtaining driverless testing permission in China. Vehicles must have obtained T3 or higher testing ability, completed more than 30,000 kilometers of safe test driving on open roads, and passed an evaluation on a closed track, according to the requirements announced by the Beijing municipal government last month. Baidu's test vehicles have cleared all these requirements.

The driverless permits are a key milestone in Baidu's plan to build a commercial autonomous driving business. The company's AI-powered autonomous vehicles are now capable of operating in complex urban road conditions, it said.

It added all the fully driverless vehicles undergoing the road tests in Beijing are powered by the 5G remote driving service, which allows safety drivers to remotely take control of vehicles in case of an emergency.

The move came after Baidu fully opened Apollo Go Robotaxi, its self-driving taxi service, to the public in Beijing in October. Each of the driverless taxis has a backup driver, who is ready to take manual control in an emergency.

Jiang Zheng, a self-driving expert at China's GAC research and development center, said the driverless road tests are a key link in the development of self-driving technologies, and will speed up the commercialization of autonomous vehicles.

"Compared to the tests on closed tracks and under the supervision of a backup driver, the driverless road tests on public streets will examine various capabilities of autonomous driving system, especially how the self-driving vehicles deal with emergencies," Jiang said.

He said the authorities are relatively cautious on autonomous driving due to some safety issues, and more efforts are needed to make breakthroughs in key technologies, supervision, laws and regulations and test scenarios to promote the large-scale commercial use of the self-driving technologies.

China is planning to realize the scale production of vehicles capable of conditional autonomous driving and commercialization of highly autonomous vehicles in certain circumstances by 2025, according to a blueprint issued by the National Development and Reform Commission, the Ministry of Industry and Information Technology and nine other ministries.

Zhang Xiang, an automobile analyst at the new energy and intelligent connected car industry think tank under the Ministry of Industry and Information Technology, said the driverless testing permits in Beijing showed that the technological level of China's autonomous driving has improved, while noting more cities, such as Shanghai, Guangzhou and Chongqing are expected to allow similar driverless road tests in the future.