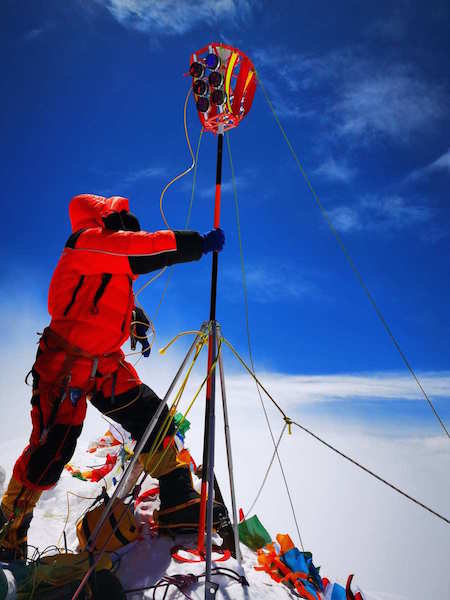 A Chinese surveyor conducts surveying atop Mount Qomolangma on May 27, 2020. The new height of Mount Qomolangma, the world's highest peak, is 8,848.86 meters, China and Nepal jointly announced on Tuesday. (Xinhua/Tashi Tsering)

-- The new height of Mount Qomolangma, the world's highest peak, is 8,848.86 meters, according to a joint announcement by China and Nepal.

-- Bhandari said Nepal and China have always been good neighbors, friends and partners.

The new height of Mount Qomolangma, the world's highest peak, is 8,848.86 meters, according to a joint announcement by China and Nepal on Tuesday.

The figure, including the height of the snowcap, was confirmed by surveyors from the two countries, which reached a consensus last year to jointly declare the remeasured height of the peak and conduct scientific research on it.

For more than a year, the two countries' survey teams have overcome all kinds of difficulties, solidly carried out their work, and finally reached a conclusion on the snow height based on the International Height Reference System, he said.

A Chinese survey team reached the summit of Mount Qomolangma on May 27 and remeasured the peak height. The team members remained at the summit for two and a half hours, a new record for Chinese climbers. Nepali surveyors reached the top of the mountain in May 2019.

The joint announcement of the new peak height is of great significance in carrying forward the undertakings of the predecessors to the future and showcasing the high level of the continuous development of China-Nepal relations, Xi noted.

Khim Lal Gautam, who had scaled Mount Qomolangma in May 2019 for the Nepali measurement, said he is extremely happy to see both the countries endorsing the new height together.

"The technical teams from both sides sat together sharing their data and information before reaching a conclusion," he told Xinhua. "This is an example of technical collaboration between the two countries."

He said it is a good move that the two countries linked by mountains have joined hand in hand to have an uniformity in the height of Mount Qomolangma, which attracts the world's attention.

This year marks the 65th anniversary of the establishment of diplomatic relations between China and Nepal. Hailing the joint efforts, Xi said both sides have enhanced mutual political trust, steadily advanced the building of the Belt and Road Initiative, and are turning the vision of a cross-Himalaya connectivity network into a reality.

He called on China and Nepal to push forward their strategic partnership of cooperation featuring ever-lasting friendship for development and prosperity, and work together to build a closer community of shared future benefitting both countries and peoples. 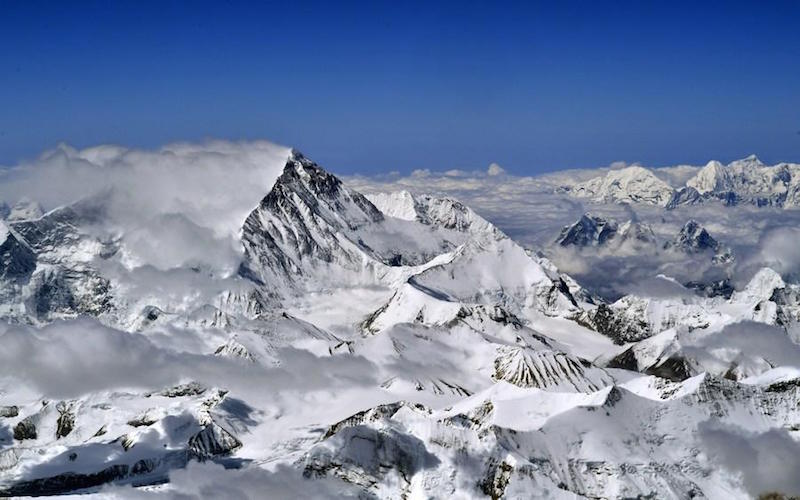 In her letter, Bhandari said Nepal and China have always been good neighbors, friends and partners.

It is in line with both countries' interests that the two countries conduct cooperation in areas of economic development, connectivity, and cultural and people-to-people exchanges, she said.

Bhandari said she is more than happy to jointly announce the height with Xi as the mountain is a lasting symbol of the traditional friendship between Nepal and China.

Mount Qomolangma straddles the China-Nepal border, with its northern part located in Xigaze in southwest China's Tibet Autonomous Region. Since the founding of the People's Republic of China in 1949, Chinese surveyors have conducted seven rounds of measurement and scientific research on Mount Qomolangma. 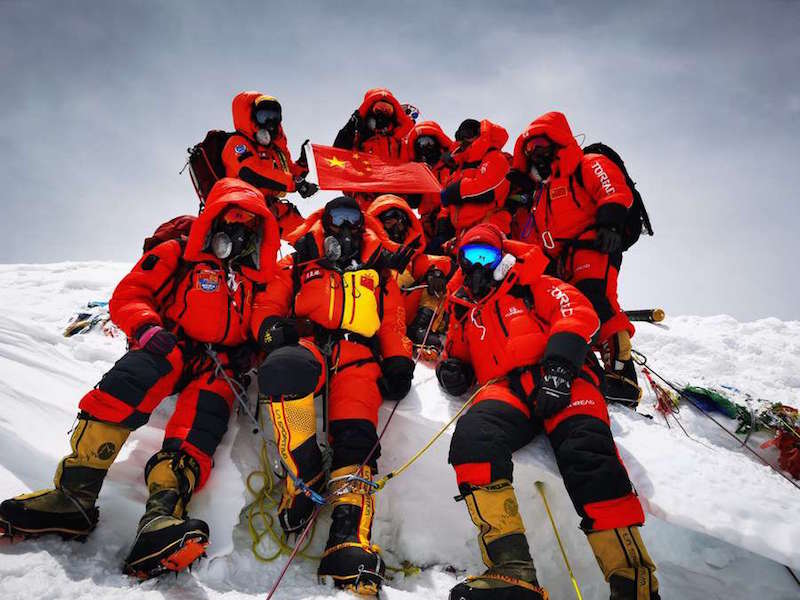 Chinese surveyors pose for a group photo atop Mount Qomolangma on May 27, 2020. The new height of Mount Qomolangma, the world's highest peak, is 8,848.86 meters, China and Nepal jointly announced on Tuesday. (Xinhua/Tashi Tsering)

As the movements of the Indian and Eurasian plates continue, regular remeasurement of the peak needs to be updated. Theoretically, this should be done every 10 to 15 years, said Dang Yamin, who is in charge of the coordination of height measurement technologies.

The latest measurement was markedly more scientific, reliable, and innovative than the previous one in 2005 thanks to the application of multiple homegrown technologies, including the BeiDou Navigation Satellite System, according to the Ministry of Natural Resources.

"The collaboration in the announcement of the height jointly depicts the strong bonding between the two countries," Padma Kumari Aryal, Nepali minister for land management, told Xinhua. "As the height has been announced jointly, there would be no confusion from now on."

#Qomolangma #8848 #Nepali #Himalaya
This page is provided in cooperation with People's Daily Online.