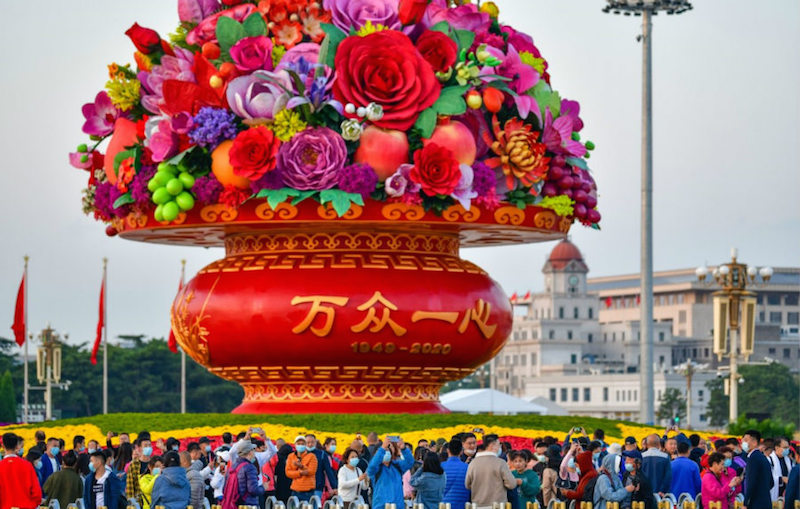 China has embraced its 71th anniversary of founding, after winning a series of remarkable fights against the COVID-19 epidemic and floods, which helped it turn crises into opportunities and successfully responded to changes.

Withstanding the tests, China is now standing on a new point of history, from which billions of Chinese people, with confidence and pride, will embark on a great journey in the new era.

Human history, like a river, runs forever, witnessing both peaceful moments and great disturbances. The heroic Chinese people is never afraid of rains and storms, and will always proceed against challenges. Since this year, facing a severe situation and unprecedented challenges, the Communist Party of China (CPC) Central Committee with Comrade Xi Jinping at the core has led the Chinese people from all ethnic groups to tackle difficulties, with strong leadership and brilliant governance, nurturing new opportunities in crises, and seeking chances among changes. As a result, China secured stable performance of reform and opening-up, and a successful ending of its 13th Five-Year Plan. It is expected to achieve a final victory over poverty, and finish building a moderately prosperous society in all respects.

In face of the sudden COVID-19 outbreak, billions of Chinese people launched a breathtaking war against the virus under the strong leadership of the CPC Central Committee, withstanding an arduous test of history, achieving major strategic results, making another magnificent feat in the history of human beings’ fight against diseases, and building a great spirit of combating the COVID-19 epidemic, which features putting people's lives first, nationwide solidarity, sacrifice, respecting science, and a sense of mission for humanity.

China has become the first major economy to return to growth since the COVID-19 pandemic, and is leading the world in both epidemic prevention and economic recovery, which demonstrates the outstanding efficiency of the country’s governance system. The indomitable Chinese people once again defeated hardships and left a glorious page in the history. Salute to the great People’s Republic of China, and salute to the great Chinese people. 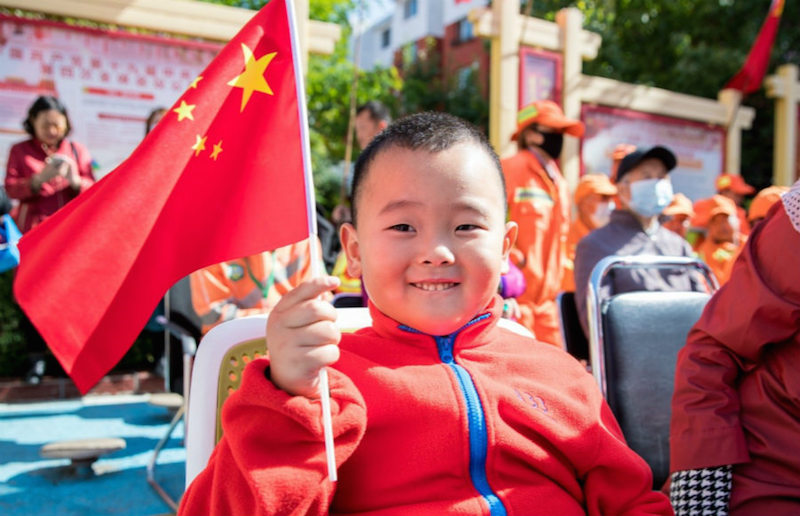 Time records history and heralds future direction. In the past, the Chinese people have made numerous struggles and realized incalculable dreams; today, the country is going through a series of remarkable fights with the strong leadership of the CPC and the solidarity of the people. Thanks to long-term and unremitted efforts, the Chinese nation will put an end to absolute poverty, a problem that has bothered it for thousands of years, and finish building a moderately prosperous society in all respects. This is a result of the persevere struggles of the Chinese people, and will inspire the nation to sail for farther goals. The closer the country gets to its goal of national rejuvenation, the more difficulties and challenges it will encounter. At a time when the two centenary goals converge, the country must understand and grasp domestic and international situations in a dialectical manner, enhance the awareness for opportunities and risks, cherish present development results and consolidate development momentum, and pool resources and concentrate on managing its own affairs well, so as to progress courageously on the great journey in the new era.

China has the confidence and strength to achieve further development. From a country facing daunting tasks of reconstruction to the second largest economy of the world, China has stood up, grown rich and become strong. After the past 71 years since the founding of the People’s Republic of China, including the 40 years pf reform and opening-up, especially since the 18th CPC National Congress in 2012, China, relying on its people, has turned the impossible possible, making miracles of rapid economic development and social stability.

Today, the country’s powerful comprehensive national strength is its confidence to cope with challenges; its institutional advantages serve as a basic guarantee for it to deal with risks. China will enter a new development phase in the upcoming period of the 14th Five-Year Plan. Though profound and complicated changes are taking place in the exterior environment, the basic trend of steady long-term growth for China's economy remains unchanged; the basic characteristics of China’s economy with sufficient potential, great resilience, strong vitality, large space for maneuver and many policy instruments remain changed; and the advantages and conditions of China’s development remain unchanged.

China will analyze and grasp development situations in a science-based manner, adhere to the general principle of pursuing progress while ensuring stability, continue to apply the new development philosophy, coordinate development and security, accelerate forming new development patterns, work to make development higher-quality, more efficient, fairer, more sustainable and more secured. The country is destined to overcome all kinds of difficulties and risks, and gain initiative and advantages to win the future.

China has the resolution and confidence to achieve future development. The CPC will embrace its 100th anniversary of founding the next year. Over the past century, the Party has never shaken its commitment to bettering the lives of the people. It fought tenaciously when invaded and separated, strived when struggling for basic survival, and is advancing with the time amid development.

The CPC and the Chinese people, with their perseverance, dare to rise up to and conquer all difficulties. Under the strong leadership of the CPC, relying on the people and facing challenges with courage, China is bound to create new achievements.

Today, the country is closer, more confident, and more capable than ever before of making the goal of national rejuvenation a reality. It shall closely unite around the CPC Central Committee with Xi as the core, bear clearly in mind the need to maintain political integrity, think in big-picture terms, follow the leadership core and keep in alignment, developed greater confidence in the path, theory, system and culture of socialism with Chinese characteristics, and firmly upheld General Secretary Xi Jinping’s core position in both the Party Central Committee and the Party as a whole, and firmly upheld the Party Central Committee’s authority and its centralized, unified leadership. It must stand on the right side of history, stick to the path of socialism with Chinese characteristics, advance toward the goal of achieving the great rejuvenation of the Chinese nation, and continue creating a better life for tis people. No force is able to stop the progress of the Chinese people and Chinese nation.

#COVID-19 #new era
This page is provided in cooperation with People's Daily Online.