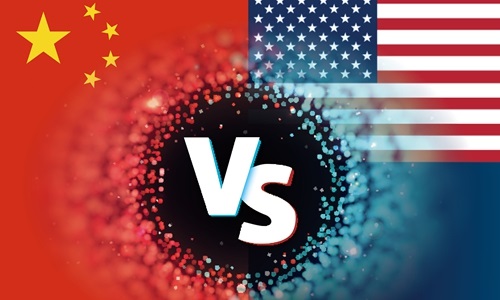 More politicians may be targeted if US continues to smear

"Symbolic" US sanctions against several Chinese officials over Xinjiang-related issues may be harmless, but China's countermeasures directed at some of the US' most "rancorous" China hawk senators will "rain pain" upon them, Chinese experts said after China announced sanctions against certain US officials, including Marco Rubio and Ted Cruz, and warned that more US officials may be targeted by further countermeasures if the wrestle continues.

As Washington has now descended into a "morbid and bottomless" struggle to contain a rising China, Chinese observers noted that the targeted sanctions China announced signals Beijing is fully prepared for the further floundering of China-US ties; and although China hopes for the best that bilateral ties will evolve, China is still preparing for the worst to come.

Hua Chunying, spokesperson of the Chinese Foreign Ministry, made the announcement at Monday's routine media briefing. Hua said that China will impose reciprocal sanctions on the mentioned commission and four US individuals effective immediately in response to the US sanctions on one Xinjiang regional government department and four Chinese officials.

The move came three days after the US sanctioned Chinese officials over alleged human rights abuses in Xinjiang.

Sanctioning such US figures can be considered a "precise targeting" strategy from China as Rubio and Cruz are among the most active China hawks in the US Congress, and precise retaliation measures against them demonstrate China's strong determination to guard against foreign interference over its domestic affairs, Li Haidong, a professor at the Institute of International Relations, China Foreign Affairs University, told the Global Times on Monday.

The US sanctions do not have any meaningful impact upon China, but it shows a malicious attitude toward China, therefore, China decided to launch peer-to-peer countermeasures, said Lü Xiang, a research fellow at the Chinese Academy of Social Sciences in Beijing. But China's sanctions will have a larger impact on US officials, Lü told the Global Times on Monday.

For example, Marco Rubio, a US Senator from Florida, will face pressure regarding reelection two years from now as Florida has close contacts with China in terms of culture, trade, education and technology.

Florida has established several sister city agreements with China. Meanwhile, China is Florida's 11th-largest export market and largest source of imports. According to the US Department of Commerce, Florida exported goods worth $1.36 billion to China and imported about $12.2 billion from China in 2019.

'Hope for the best, prepare for the worst'

In recent years, the Trump administration has shot a firestorm of measures to smear and attack China over issues regarding China's Xinjiang, Tibet and Hong Kong. Apart from issuing various bills and sanction measures, it has also harnessed the power of media, and other platforms as well, to fabricate rumors to smear China's effort in managing these regions.

On Sunday, the US embassy and consulates in China claimed "many products made in China are made by slave labor," and asked businesses to check their supply chains to ensure they are not profiting from "China's human rights abuses against Uygurs in Xinjiang" in a tweet on Sunday.

But the tweet soon drew ridicule and angry backlash from netizens after the US embassy posted an apparently photoshopped clothes tag that read "made by slave labor in China."

Many netizens at home and abroad ridiculed the US, saying it has been dedicated to smearing China and selectively forgetting its brutality toward Native Americans while groundlessly accusing other countries of human rights abuses.

"We used to believe that the US domestically had a self-correction system, that when China-US relations turn sour, they will do whatever they can to push out of a situation," said Li Haidong. He noted when increasingly more politicians such as Cruz and Rubioemerge within the US political circle, the US will further slide into a morbid and even bottomless struggle against China.

Both Cruz and Rubio hold deep grudges against Communist governments because of their family origins and they try to stand firmly against China to win over political capital.

Diao said that the slew of hostile measures toward China cannot be seen as an "irrational eruption" of anti-China attitudes in the US or a usual tactic to hype up the "China threat theory" before election, but more so the US' enhancing antagonism to contain a rising China.

"Right now China needs to formulate directives to deal with long-term US challenges, instead of playing along with the latter every time it exerts blows," Diao said.

For tactics against the US, China is hoping the best but preparing for the worst, Diao told the Global Times on Monday. He noted that coupled with China's rapid growth, the country is gradually taking initiative to forming relations with Washington, rather than sitting idly by and waiting for the latter to swing its punches.

Similar pressure will also be imposed on Ted Cruz, the junior US Senator for Texas.

"Restricting visas and freezing properties are usually two tactics for sanctions. Such tactics could affect US officials more under the revolving door mechanism, as they would have to engage in business someday in the future," Lü said.

The revolving door mechanism, which has long existed in the West, most notably in the US, allows for the movement of people from the government to the private or academic sectors and back again.

Diao Daming, an associate professor at Renmin University of China in Beijing, told the Global Times on Monday that the US Congressional-Executive Commission on China was among the most rancorous organizations formed against China on issues over Xinjiang and other religious topics. For example, it once held a hearing in 2018 over Rebiya Kadeer, a separatist from Xinjiang who now resides in the US.

Sanctions against this organization will be mainly imposed via visa restrictions or entry permission of personnel related to this organization. Also Chinese authorities will strictly scrutinize the organization's request of assistance to any Chinese institute.

Lü predicted that if the US continues to smear China and impose sanctions against China to interfere in its internal affairs, more US officials might be listed for retaliation such as Secretary of State Mike Pompeo and David Stilwell, Assistant Secretary of State for the Bureau of East Asian and Pacific Affairs.