In a bid to call on the international community to unite and defeat the COVID-19 pandemic together, the Chinese People’s Association for Friendship with Foreign Countries (CPAFFC) released a music video of the famous Chinese charity song “Let the World Be Filled with Love” on May 20, 2020.

The song, composed by renowned Chinese musician Guo Feng in 1986, became a great success and has since been performed hundreds of times.

Now, 34 years on, Guo Feng, together with six foreign friends from around the world, and Chinese actress and singer, Lou Yixiao, have recorded an international rendition of the song to show their love and support for countries and regions hit by the coronavirus disease.

The singers perform the song in the six official languages of the United Nations: English, Russian, French, Spanish, Arabic and Chinese.

With the pandemic raging around the world, the song carries special significance. “Only by unity and cooperation can human beings defeat the pandemic together,” explained CPAFFC president Lin Songtian, adding that the association hopes that the song will fill the world with love.

“Singers from over 40 countries have sung the song since the coronavirus outbreak to show their love for China,” said Guo, adding that this international rendition of the song shows China’s love to people around the world.

Lou Yixiao, who is often actively engaged in public charity activities, said she wanted to do her bit to bring hope to the world. “I wish to let people across the world be aware that we are one family at this difficult time. We will definitely defeat the virus as long as we unite as one.”

Mohamed Jihad is a postgraduate student from Egypt currently studying Broadcasting and Hosting Arts at the Communication University of China.

“As a famous Chinese saying goes, when you drink the water, don't forget those who dug the well,” Jihad said, noting that China and his country have helped each other since the beginning of the outbreak, which proves that the whole world is one big family.

“The meaning of the song is to have the world come together, with shared love. We are one family. It’s inside the song. That inspiration touched me so much that I had to be in this song,” said Mariatu Kargbo, a singer from Sierra Leone, adding that she wanted people who listened to the song to know that their Chinese friends’ hearts go out to them wherever they are. 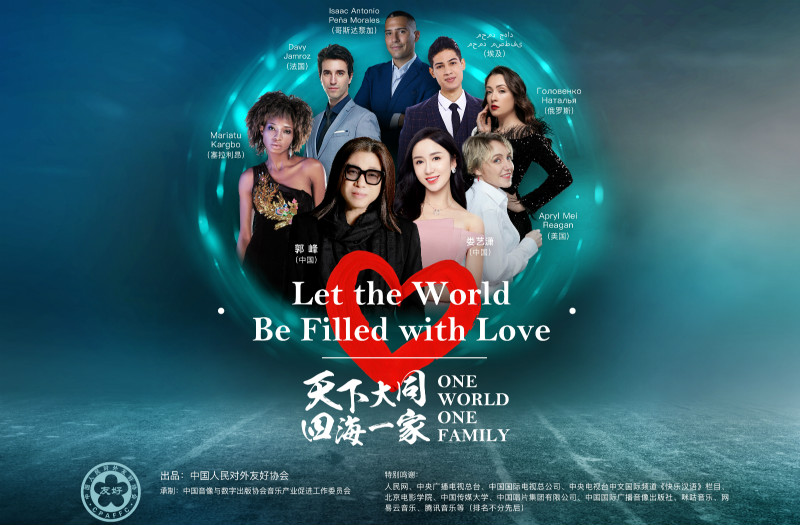 Mariatu also noted that the Chinese government took swift action during the outbreak to treat all confirmed patients, representing the fundamental equality of all people.

Apryl Reagan, an American singer currently working and studying in China, was deeply impressed by the solidarity shown by Chinese people during the outbreak.

“I think that no matter how bad anything gets, having somebody with you to go through it makes it okay. And I think that we all have each other, not just the ones we know, but everybody around the world with us at this moment,” she said, believing that people could feel the love shown to each other during this special period.

Talking about the most impressive line from the lyrics, Isaac Pena from Costa Rica, said that “No need to say another word” demonstrated that music and love know no boundaries. “People from different countries should unite to overcome their difficulties,” he noted.

After the COVID-19 outbreak , many foreigners chose to stay in China, and Davy Jamroz from France was one of them. He noted that China’s success in controlling the epidemic has brought hope for other countries.

According to Natalie Golovenko from Russia, she actually felt safe in China, because the Chinese government immediately adopted measures to prevent and control the virus. “I hope that through the song I can actually express my love, my support and how much I wish that everyone is going to be okay,” said Golovenko, adding, “I hope that the song will let people suffering from the disease know that the virus will be defeated and we stand together with them.”