On January 18, 2020, on a high-speed train to Wuhan, one of the world’s most populous cities, people were chatting excitedly. A festive atmosphere filled the air, as passengers could not wait to get back for the Chinese New Year. None of them could know that in just a few days, their destination would become a forbidden zone plagued by a lethal virus.

Knotting his brows at some medical reports, one old man sensed a lurking danger. On that day, 59 citizens in Wuhan had caught pneumonia of unknown etiology. The abnormal phenomenon reminded him of the severe acute respiratory syndrome (SARS) outbreak that had rampaged across China 17 years ago. It was he who had come up with an effective treatment for SARS. Now, it was time for him to do it all over again. 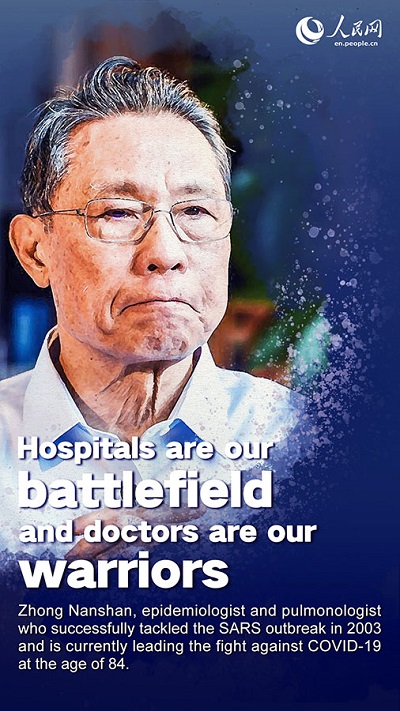 China’s most prestigious epidemiologist and pulmonologist, 84-year-old Zhong Nanshan, is widely known to the public as the hero who defeated SARS. After a lifetime researching respiratory diseases, he was keenly aware that the new pneumonia may not be a simple disease, but a Pandora’s box that could engulf the world.

After a sleepless night on the train, he arrived in Wuhan before dawn, where the COVID-19 outbreak had occurred just a few days later.

Zhong grew up in a family of doctors, and lives by a simple motto: save lives and always be honest. In 2003, when SARS wreaked havoc across China, he volunteered to treat patients, staying in hospital wards for weeks on end to study the disease.

When then weren’t enough respirators for all the patients, Zhong would use a manual gasbag to help them breathe, a method that is highly contagious and resulted in his catching pneumonia. But instead of resting, he went back to treating patients three days after his fever subsided. At the same time, he also spent countless nights in his lab looking for a cure for the lethal disease. His efforts paid off: months later, his treatment plan for SARS was adopted by China and then the whole world, saving thousands of lives.

Zhong is also known for being an honest scholar. When authorities announced that the virus had been brought under control, he publicly denounced the assessment, deciding instead to tell the public the truth. In one post-SARS interview, he said: “I couldn’t help myself, I said it’s not all under control.” His honesty won widespread praise from the Chinese public, who hailed him as a hero.

Seventeen years later, this octogenarian is once again leading a team in a battle against an epidemic. Although this new virus is known to be particularly dangerous to the elderly, Zhong paid little heed to his own safety. On January 29, he and his colleagues spent over six hours on an online medical inquiry, checking five patients who were in critical condition. He even removed his mask from time to time, out of fear that the doctors in the hospital wards may not hear him clearly.

For his students and colleagues, Zhong is a role model who inspires them to practice the values that he lives by. During the SARS outbreak in 2003, 26 doctors from Zhong’s team became infected, but none left their posts. Once their diseases were cured, they returned to the hospital wards. When WHO officials asked Zhong if any of his doctors had ever left their patients, he proudly answered: “Not even one.” Once again, his team members are going into the most dangerous epidemic areas, and all are remaining at their posts.

“The hospitals are our battlefield, and doctors are warriors. When we are needed, we should charge forward, because this is our duty!” said Zhong.

Wuhan: a city of heroes

As well as treating the patients, Zhong is also a messenger who delivers factual updates of COVID-19 to the public. Being unfamiliar with social media platforms, he has asked colleagues to help him make videos aimed at calming irrational fears about the virus and teaching the public how to prevent the disease, such as how to wash hands or wear a mask correctly.

While praised as a hero, Zhong told the media that Wuhan, the epicentre of China’s COVID-19 outbreak and where tens of thousands of citizens have been confined to their homes for weeks to prevent the spread of the disease, also deserve that accolade.

“I believe that Wuhan can pull through the epidemic, because it is a city of heroes,” he said