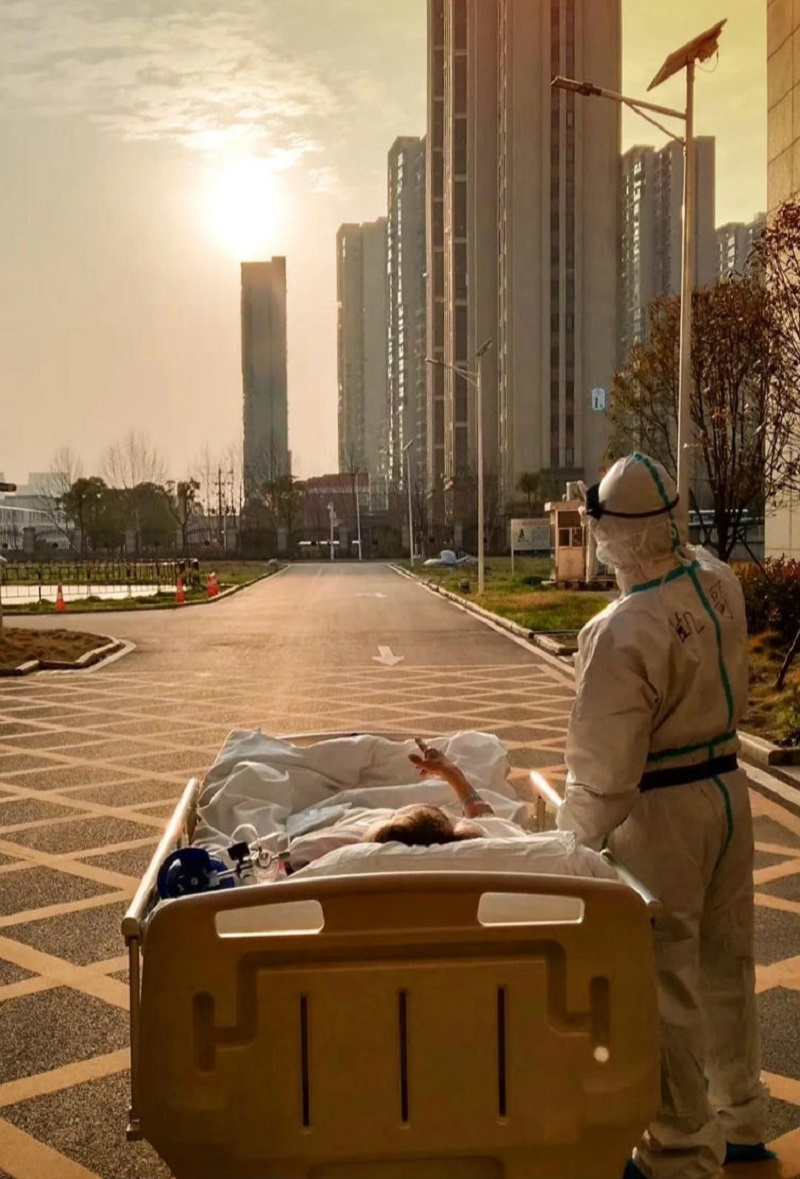 Under the setting sun, a doctor, in protective clothing, and a patient, nestled in his hospital bed, both look together at a ruby sunset while pointing their fingers ...

This photo touched countless people as it was shared through friends online, becoming viral. Netizens sighed looking to the photo exclaiming that it is "so soothing." Let’s have a look into the story behind this photo.

The photo was taken after 5 pm on March 5 at the East Hospital Branch of the Renmin Hospital of Wuhan University.

In the photo, Dr. Liu Kai, a member of the medical team from Zhongshan Hospital affiliated to Fudan University, stopped while escorting the patient for CT, and the 87-year-old man, who had been hospitalized for nearly a month, seized the opportunity to savor a glorious sunset, something he had not seen in a long time.

"It was so unexpected. It was just a photo that I thought would have great memorable value," said Liu. He kept saying that he did not expect this photo would resonate so much with so many people.

On the evening of March 5, Liu and a volunteer, by the name of Gan Junchao, pushed the 87-year-old patient, suffering from a case of pneumonia brought about by the novel coronavirus, to the CT department for screening.

On the way back to the inpatient ward, Liu was touched by the golden sunlight beaming down onto him. He asked the patient next to him whether to stop and watch for a while and the old gentleman said, "sure." The three stopped and enjoyed the stunning sunset. Volunteer Gan captured this super beautiful moment that has touched millions.

Liu said, "After I came to Wuhan, I would leave early and returned home late every day. Basically, I stayed in the ward during the day and rarely saw the sun. So when I saw the golden sunset, he was instinctively moved."

Liu was part of the fourth batch of members of the Zhongshan Hospital to support Hubei and arrived in Wuhan on February 7 with colleagues.

The patient used to be a violinist in an orchestra before entering the hospital on February 9. When he first came in, the man was seriously ill, depressed and disengaged.

During the treatment process, the entire medical team made great efforts to assist the patient in the process of gradually stabilizing both the physical and mental states.

After getting along for more than 20 days, not only did this older man get better and better, the connection he had with the medical staff became more and more heartfelt. Just several days earlier, for example, the old man hummed a Chinese song “何日君再来” (When will you come again) for the medical staff.

The photographer, Gan Junchao, a 20-year-old hospital volunteer, joked that he was not good at taking photos. He said on the phone, "I rarely take pictures. This nice picture was just a matter of pot luck."