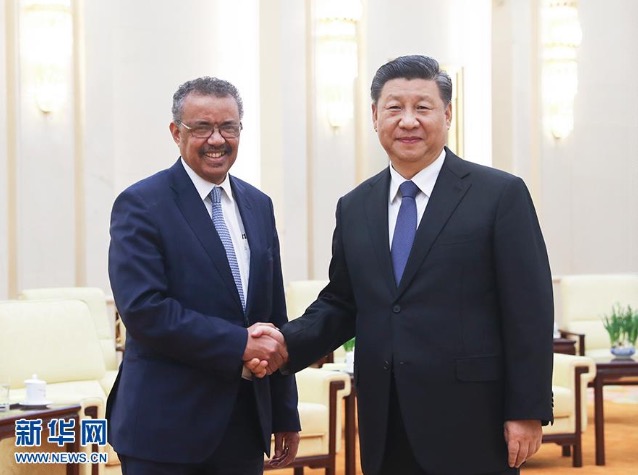 Committed to promoting the building of a community of shared future for mankind, China has been striving to undertake its due international responsibilities and obligations in countering the epidemic, said experts from Shanghai Institutes for International Studies.

The Shanghai based think tank pointed out with utmost openness and promptness, the Chinese government is working closely with the World Health Organization (WHO) on every step of the epidemic, exemplified by President Xi’s meeting with WHO Director-General Tedros Adhanom Ghebreyesuson on January 28.

The Chinese government has given full understanding and assistance to other governments’ actions to prevent the epidemic, such as some countries’ evacuation missions from Wuhan and their decisions to halt airlines to China. All such requests will continue to be met with utmost efficiency and generosity from the Chinese government.

Furthermore, the Chinese government has remained open and grateful to all kinds of assistance from other countries in countering the epidemic. At the same time, China is considering promoting such cooperation in future epidemics of the world.

Experts from Shanghai Institutes for International Studies have issued detailed proposals to the international community, in an effort to gather global strength to cope with the epidemic for common human security.

According to the experts, the top priority would be optimizing the existing epidemic information disclosure mechanisms. China’s daily “epidemic bulletin” broadcast in multiple languages plays the key role, in particular the languages of neighboring countries, such as Russian, Japanese, Korean and English, so that related information and data can be accessible to the public before fake news and rumors begin to spread. Successful actions of the Chinese government in preventing the spread of the epidemic can be introduced in detail in the Bulletin, too. The real-time Bulletin in multiple languages should be put on the websites of the Ministry of Foreign Affairs and Chinese embassies and consulates abroad. Meanwhile, we strongly hope that international media and thinktanks maintain an objective, comprehensive and humane stance in conducting reports or analyses of the epidemic and avoid hyping unconfirmed information or even rumors.

Strengthening international exchange of experience in epidemic control is also a crucial cooperative area.It is important for China to translate the latest Guidelines for Preventing the 2019-nCov into different languages and pass it over to neighboring countries swiftly and in multiple forms (such as by social media). It will not only help those countries counter the epidemic with Chinese experience, but also contribute to China’s image as a “kind neighbor” and “responsible great power.” We call for more support from the United States, EU and other developed countries in medical equipment and supplies, as well as their best practices in epidemic control.

Last but not least, opposing discrimination against epidemic-struck regions and people. The epidemic must not become a new fence between countries, but it should be turned into a new bridge across nations. At present, China’s Ministry of Foreign Affairs as well as embassies and consulates abroad are in close contact with the governments and health and epidemic prevention agencies of other countries, updating them with the latest progress in countering the epidemic. Chinese communities abroad also keep a close eye on the health conditions of Chinese living in their neighborhood; and they are ready to help local epidemic prevention agencies, if necessary, to provide certifications for healthy Chinese or those proven healthy through self-quarantine, so as to prevent ugly anti-Chinese events due in large part to incomplete information. We hereby advocate that the public in all countries remain calm about the epidemic and avoid discrimination against Chinese or any infected persons. For we, as human beings, are one family and no ethnic group can stand immune to our common challenge.