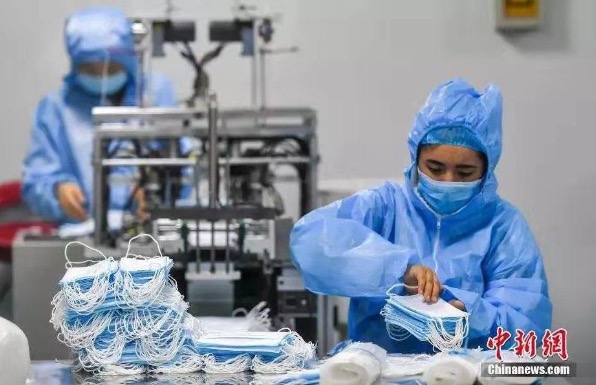 Following the outbreak of the novel coronavirus, China is now facing obstacles that may hinder its economic development in a short run, but the country’s economy will show strong resilience and will not be severely slackened, said experts.

According to a report released by Shanghai Institutes for International Studies, the 2019-nCov epidemic poses direct harm on three main sectors of China’s economy, which are the service sector, especially such consumer industries as tourism, catering, entertainment and logistics (in particular for small- and medium- sized enterprises); the manufacturing sector, typically in mobile phone, automobile and electronic industries, due to indefinite time for return to operation, which may to some extent disrupt the global industrial chains; as a manufacturing center in China, Wuhan city is under heavy economic blow; as well as the trade sector, owing to potential cuts or even shutdown of airlines, sea routes and borders by some countries as a result of the prevailing panic or geopolitical considerations.

The report also noted that there are three major views, both in China and abroad, about the negative impact of the 2019-nCov epidemic on China’s economy. The “critical impact” theory tends to think that it will have serious effect on the already slackening Chinese economy, even causing a slide of its growth rate and handicapping global economy. Based on data about the economic impact of SARS in 2003, the “manageable impact” theory believes that the epidemic will have only limited and controllable effect on China’s economy, and that China’s economic performance of the whole year will not be much influenced despite a declining growth rate in the first season. The “uncertain impact” theory holds that historical evidence does not tell much about the future economic trajectory, but the actual economic impact depends on how long the epidemic will last. After all, China’s economic size (99 trillion RMB in GDP) is 9 times that of 2003 (11.7 trillion RMB).

Though China has curbed several epidemic outbreaks during the past few decades, the report noted that the potential impact of the 2019-nCov epidemic can be different from all the previous epidemics and other incidents. For one thing, it occurs when China’s economy, in the midst of a transition from high-speed growth to high- quality development, faces three daunting tasks domestically, i.e., guarding against systemic financial risks, control of pollution, and poverty eradication; externally, with globalization under unprecedented challenges and China-U.S. trade frictions only starting to ease, China’s economy will be further hit if the country is labeled as an “epidemic area.” For another thing, the current epidemic has influenced larger areas and to greater degrees. Not only are the complete quarantine of Wuhan city and first- level response applied by more than 30 provinces or municipalities the first time in history, but the epidemic has impacted all economic fields across the nation; its effect on small- and medium-sized enterprises is yet to be seen, while China’s employment, local government debt issue, and stability of the RMB value are all under severe test. It is widely forecast that China’s economic growth will be down by 1 to 1.5 percentage point. Some even doubt if China’s economy can achieve a 5-percent growth in 2020.

Nevertheless, the resilience of China’s economy cannot be underestimated. Even in the short term, the epidemic does not cause merely negative effect on economy, but it has benefited such industries as electronic commerce and online game and entertainment. At the same time, the Chinese government boasts strong financial capacity in crisis management -- as of January 29, 2020, a total of 27.3 billion RMB (nearly $4 billion) had been provided by governments of all levels for epidemic control; more policy measures will be adopted as the epidemic continues. In the mid-term, some Americans doubt if China is able to fulfil its commitment made in the Phase I deal with the United States; however, China’s purchase of U.S. agricultural products is expected to reach a new high for the deal has greatly wiped off the uncertainty of China-U.S. trade relations; besides, due to the epidemic, China is very likely to increase purchase of other products, such as medical equipment and supplies. Notably, the epidemic will be taken into full consideration in the making of China’s 14th Five-Year Plan (2021-2025) and new measures are expected to be adopted to stimulate economy for the next five years. In the long run, as China has grown to be the second largest economy, the epidemic cannot undermine its huge potential in consumption, urbanization, and such new economic fields as 5G and artificial intelligence.